by Maria Calderoni 2 months ago in Short Story 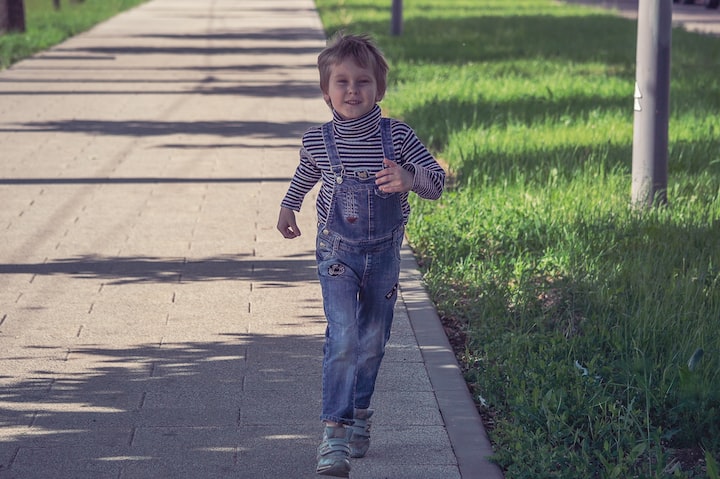 Photo by Vitolda Klein on Unsplash

In the morning the shadows fell on the sidewalk.

On his way home the sidewalk was sunny and hot.

There was the mailbox, painted red, with one door hinge hanging off.

Then the pile of rocks in Mrs. McAndrew’s front yard. Sometimes he took one, they were so pretty. He would put it into his pocket on the way to school. On the way home he always put it back. It was his own “rent a rock for a day,” system.

There was the old old lady who kept her yard so neat. She was always sitting on the porch to wave at Jeffery in the morning. In the afternoon he guessed she was inside napping.

Then came the fenced yard with all the toys and stuff scattered everywhere. Little kids lived here. Babies too young to go to school.

Jeffery liked school. He had been making this walk from his house to the school down the block and back again for three years now. At first his mom had walked with him. But when he became a first grader, she would stand in the yard and watch and wave as he walked all by himself.

Now she just kissed him good bye and went inside. (Jeffery had no idea she still stood peeking carefully from behind the curtain until he had turned into the school yard.)

One day on the way to school Jeffery noticed a small brown paper package tucked way under the bushes on the edge of his very own yard.

He didn’t have time to check on it, but he wondered all day long about that mysterious package.

Why would someone leave a package under his family’s bushes?

That day, Jeffery got in trouble for daydreaming in class and had to stay late after school. His mom picked him up and took him shopping and he forgot all about the mysterious package.

The next morning as Jeffery hurried out the door, he saw it again. He took a moment and bent down to peek under the bushes.

“Hurry along to school now Jeffery!” His mother called from the open door.

Reluctantly, he stood back up wondering and wondering.

Today he would not get in trouble. His mom would not go shopping and Jefferey would find out what was in that brown paper package.

He did not forget, and as he called goodbye to friends, Jeffery rushed home, his backpack smacking him with each step.

When he reached his yard, he tossed the backpack onto the porch and crawled under the bush, but the package was no where in sight.

As he slowly backed out of from under the bush he heard a scratching sound. Looking carefully behind the bush, he saw the red ribbon that had once so neatly contained the package, trailing behind a slowly moving, rather rumpled brown paper bundle.

Jeffery grabbed the ribbon to try to stop the package from getting away and it worked. Everything froze.

Suddenly nervous, Jeffery inched forward, lowering his head to peek into the opening he could see in the wrapping.

Two beady eyes and a pointy little nose stared back at him just as curious as he was, though maybe less frightened as it began to crawl out of the package and move toward the small boy laying on the ground pinned beneath a large forsythia bush.

Jeffery held his breath as a baby skunk sauntered right up to him and sniffed his outstretched hand, looking for food no doubt.

Jeffery knew better than to move. He let the skunk look him over and then it calmly crawled back into the package, turned around several times and curled itself up to take a nap.

Barely breathing, Jeffery backed out from under the bush.

He decided he would leave treats for his new friend and would not mention “Sniffer,” the name he gave the little skunk, to anyone.

Sniffer would be his own secret pet.