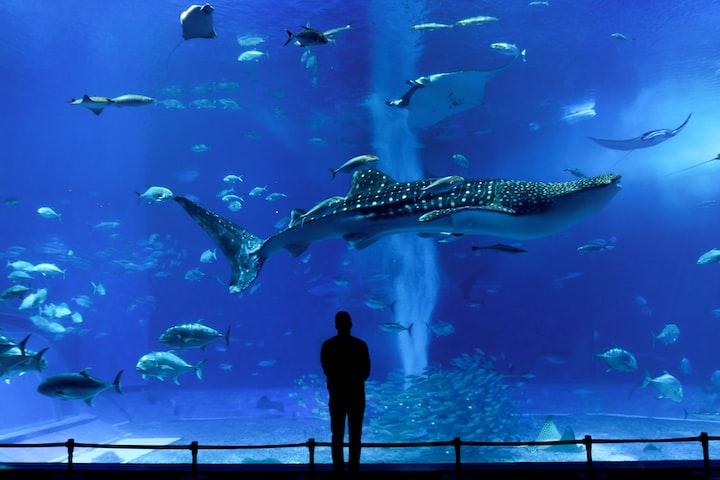 Photo by Susann Schuster on Unsplash

Jellyfish under changing lights. Turtles slowly making their way to the top of the tank. Eels crawling through mazes and popping out holes.

Zell Davidson sat on a bench to watch the marine life swim and scurry about at the Shedd Aquarium in Chicago. He made a point to visit the aquarium once a month. Today he wore a black hoodie, black jeans, and black boots. He wore a navy beanie. He donned a large mustache. This was his typical attire.

While watching the fish, a memory surfaced. It's the same memory he plays in his head over and over again: A woman in a white dress falls into a clear blue lake. A chain and ball are attached to her left ankle. Her long red hair waves around her as she descends to the lake floor. Panic in her eyes. She lifts up her arms, begging for help. Bubbles escape out her nose.

Zell can't remember what happened next. He has serious gaps in his memory. What he does remember is sitting in a boat late at night and having no oar to steer himself. He was at the mercy of the wind.

He remembers running among the cattails. Crows cawing. Someone firing a shotgun. Bang! Bang! The stench of fire and ashes lingering in his nostrils. Zell just kept running.

How long ago was all that?

Zell found the music at the aquarium meditative. The people who spoke on the intercom had softspoken, gentle voices. It always felt like a dream while there. He enjoyed watching the movements of the fish and their friends. He liked to sit there and admire the expensive glass. He wondered about the construction and all the details that were intended to keep the guests in what he considered a state of nirvana.

A little girl tapped him on the shoulder. She asked him, "Excuse me, have you. . . seen a green teddy bear?" The girl's mother, shock written all over her face, pulled her daughter away in one swift grab. The mom muttered, "Sorry."

Zell, expressionless, said, "I haven't seen any teddy bears today." The mother and daughter scampered away. He was pretty certain the mother was lecturing her daughter about talking to strangers. He hoped the mom was giving her child that lecture.

Zell relaxed back into his day trip. He always felt bad that he didn't take his cat with him to the aquarium. The cat was his closest friend, after all. Surely, the upscale attraction wouldn't mind if the cat was on a leash.

He imagined it would be entertaining to watch his black cat—appropriately named Shadow—meander the premises. Zell assumed his cat would salivate at all the fish. Licking his lips. Standing on two legs. Pressing his paws against the glass. He'd jump in a tank and carry off a wriggling fish in his mouth.

Shadow spent his days mostly staring out the window, plotting how he'd attack an outdoor cat who'd wander around Zell's house. Shadow seemed to think this random cat was mocking him. He also liked to throw around mouse toys. He played fetch decently well for a cat. Pets take the anxiety out of things. And Zell has a lot of anxiety.

A cold draft came into the room. Zell zipped up his hoodie. He slouched in an effort to huddle his body together for warmth.

Then it happened again: Woman with red hair. In a white dress. Sinking to the bottom of a lake. How long could she hold her breath? Hours later. . . in a boat. . . waiting for the little vessel to knock into a bank.

Jellyfish weren't helping Zell to keep his cool. He wasn't feeling calm or collected. So he got up; started pacing. He was debating which exhibit to visit next. The Caribbean Reef? The Stingray Touch? At Home on the Great Lakes? Amazon Rising?

Zell made sure his wallet was in his pocket. He also had a zippo lighter and fast food receipts. He decided to visit the stingrays. Something more interactive would help him to push down his unwanted thoughts.

Though, unfortunately, it did inspire another worrisome chain of thinking because he found it perplexing that aquariums all across the nation had sections where you could feed and touch stingrays. No one thought Crocodile Hunter Steve Irwin was going to die from a stingray's barb. Everyone thought he was going to be killed by a shark, big cat, venomous snake, or bear. (A crocodile would have been too on the nose.)

Every second of his horrific death was caught on camera. Zell found that extremely disturbing. Crew members for the documentary Ocean's Deadliest said before the attack Steve gave an ominous speech. It was as if he knew his time was almost up.

Zell was a fan of Irwin's work. He had Animal Planet themed posters in his childhood bedroom. He wanted to grow up to be a zookeeper.

Sitting by the pool of stingrays. Watching them do laps. Dirty hands reach out to touch them. People act like the aquatic creatures are dogs, puppies even. They like to burrow in the sand. They won't sting you unless you disturb them. Be careful where you step if you're out on the beach taking a dip in the salty waters. It's easy to accidentally step on a stingray. They're docile. Only about 1-2 people die from a stingray attack each year.

Running through the cattails. Running as fast as possible. Something was out there, and it was approaching. Darkness surround; too much fog to see the stars. Ripping open a door. . . hiding in a shack. The ringing in the ears—it wouldn't stop.

The redhead woman at the bottom of the lake. No funeral for her. Just the company of fish and microorganisms.

God, what did I do out there? Confession time with a priest didn't prove helpful. Stained glass liturgy didn't bring comfort. Never was charged for anything!—That's a relief.

Zell's therapist thinks he has unintentionally covered up the most traumatic memory of his harrowing experience. She is certain his brain is actively trying to protect him.

Now, the Caribbean Reef is a cool part of the aquarium. Coral reef, it's one of the most important ecosystems on the planet. A complex and fragile balance for the creatures who live there. Home to bonnethead sharks, queen angelfishes, cownose rays, and green sea turtles. Zell first took scuba diving lessons in the Caribbean. He went to Antigua with his first wife on their honeymoon. She stayed at the resort while he dived. She got sick from the sushi at the tiki bar.

Zell didn't have those scuba skills when he was at the lake. He couldn't go back to find her. Even if he wanted to dive in to find her, he was forbidden from going back. He was put in the Witness Protection Program.

Soft-bodied coral animals. Living in colonies. Crafting stony structures. A vast seascape. Thousands of species looking for a bite to eat. They want shelter, sanctuary, and solemnity. Tiny fish among coral branches; sharks suckerpunching the water. A haven for predators. Prey must learn to hide.

Zell knew someone was coming for him soon. Would it be the thing that chased him in the woods? Or would it be an alien who had been watching him from above, someone who knew the truth and wanted to beam him up for punishment?

Zell expected FBI agents to take him out of Shedd. His face would be on every television. A missing person case solved. Justice for the redhead.

Red hair waving in the wind. White dress. In the shallow end. Water up to her knees. A large straw hat on her head. She had a frog in her hands. She showed it to Zell. He touched it, and then it leaped into the lake with a loud splash.

The woman laughed. Sunbeams in her hair. A little sunburnt on her cheeks and neck.

Making his way through a crowd. Heart racing. The reef turtles started to look like blurs to Zell. He knew he needed to get up and move. Usually, his invasive thoughts don't get to him so much during the day.

A sizeable crowd had formed around a tank. Zell wanted to see what was all the commotion. He stealthily weaved around the crowd. He tried to give a polite amount of space to others. There were couples holding hands, children on people's shoulders, elders with walkers, and giggly teenagers with overexaggerated movements to appeal to their friends and crushes.

When Zell could finally get close enough to the tank, he was in awe. He stood a few feet behind the others. There was a redheaded woman in the tank with a breathing apparatus. She was wearing a bikini top and a mermaid tail. She looked just like her. The same long hair. The same green eyes. The same cute nose.

Zell drifted toward the tank as if under a spell. He was inches away from the glass. The woman swam over to him. They were eye to eye. She waved to him and smiled. She was very pretty.

Zell waved back. He felt like the universe was telling him whatever happened so many years ago wasn't his fault. If he wanted to, he could recover his lost memories.

The woman in the mermaid costume swam away. She went over to a group of children who eagerly wanted to interact with her.

More stories from Andrea Lawrence and writers in Fiction and other communities.