by Steven Shinder 5 months ago in Humor
Report Story

Doing Things By The Book 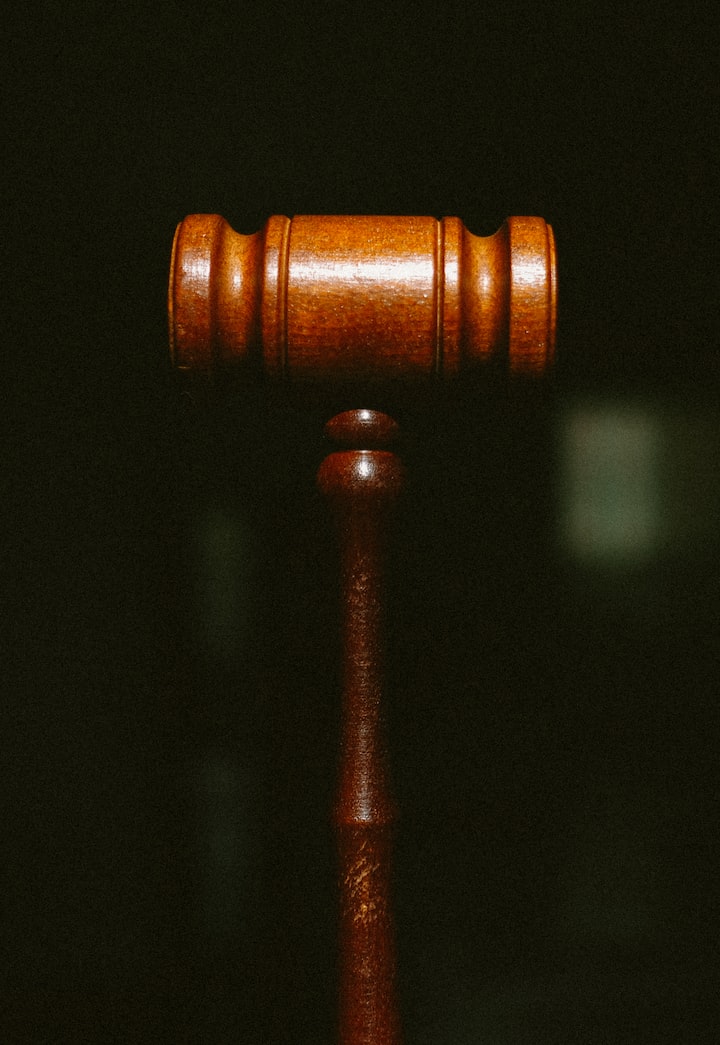 “Me personally?” she replied. “I’ve heard details and know it’s a lawsuit that got you here.”

“Oh. I was actually addressing everyone in this courtroom in general.” Daphne turned to look at the jury. “I bet you are all wondering how I got here.”

The jurors turned and looked at each other awkwardly. One of them started coughing. It lasted for a few seconds. But then that juror’s coughing continued. He put his arm over his mouth so that he would be coughing into his elbow. The surrounding jurors stood up nervously.

The juror coughed, and out came a popcorn kernel, which landed on the floor.

“Sorry,” he said. “I just came from a movie and had that stuck between my teeth. Tried getting it out with my tongue, which sent it the wrong direction. My name is Mike.”

“Interesting,” Daphne said. “May I ask why you didn’t use your finger to get it out in the restroom on your way out of the theater?”

“Honestly, I thought it’d keep me awake enough to get through this. If only we could bring popcorn buckets to these things, am I right?”

The juror smiled stupidly, but the other jurors just shook their heads. Mike’s smile faded. All the jurors seated themselves again.

“Anyway,” Daphne said. “You’re probably wondering how I got here.”

“Objection!” Tiff the plaintiff said. “You already said that!”

“Oh, for the love of…” Judge Zelkins muttered. “Just proceed with your story!”

“All right, all right. It all started when I was in high school. I was kind of a loner, off the radar. People were obsessed with school spirit and whatnot, but I was just looking to graduate. My parents asked me what I wanted to do with my life, and I said the words that worried them: ‘I don’t know.’ Feeling concerned, they gave me a book for my seventeenth birthday to inspire me. A book titled From A’s to C’s: How I Managed to Be Happy. A book written by one Tiff Trayson, who is sitting right there!”

The jurors gasped when Daphne pointed at Tiff.

“Order in the court!” the judge said, pounding away the gavel. “All of you know this information!”

“Regardless,” Daphne continued, “it was such an inspirational book. Tiff came from nothing.”

“Objection!” Tiff said. “I didn’t come from nothing!”

“Interjection! Do these words sound familiar to you? ‘I was average. And while I was not poor, I still felt like it. In mind, body, and soul, I felt like such a blank slate, directionless. In truth, I felt like nothing.’ That is from the very beginning of the first chapter of Tiff Trayson’s memoir. Page 51, to be specific. Seriously, why do the normal page numbers begin with the foreword and the prologue?”

“On what grounds?” Daphne asked.

“On these grounds: shut up!”

“This has got to be the stupidest case I’ve ever worked on. Can you just get on with it?”

“Begrudgingly,” Daphne answered. “That memoir told such a compelling story. Someone who found their drive just as they were applying to various universities. She changed my way of seeing the application process. Each university was a possibility. A new path to be taken. And while it is of the general opinion that the school is what shapes the person, this memoir suggested that the person shapes the school. One can create their own path.”

“A path you did not come up with on your own!” Tiff interjected. “You literally took a page from my book!”

“Figuratively! I did not literally tear a page out of the physical book! Also, it’s an ebook.”

“You copied my path!”

“It’s a free country! Sure, I could’ve accepted offers from other universities. But I looked up to you and was so inspired by your story that I wanted to follow in your footsteps by applying to the same university that was so pivotal to your formative years.”

“Oh, so you admit that you were following in my footsteps! Basically confirming that you are a plagiarist. Checkmate!”

“Wait,” a juror said. “So, this is about plagiarizing someone’s life? Not the book itself?”

“See?” Daphne said. “See how ridiculous that sounds? Tiff here is making it sound like identity theft, when all I did was take some inspiration.”

“Order in the court!” the judge said, as a juror laughed at the mishearing of the word. “I believe Ms. Trayson is requesting to present her rebuttal.”

“Very well,” Tiff said, opening up a briefcase from which she retrieved two documents. “On this document is a list of all the clubs I joined while at college: Croquet Club, Cricket Club, Crickets Club (a music one inspired by the sounds the insects make), Club Club, Checkers Club, and Car Coloring Club.”

“Wow,” Mike said. “They all begin with the same letter.”

“Who said you could talk?” Zelkins asked.

“Now,” Tiff continued, “here is a list of all the clubs that Daphne joined: Croquet Club, Cricket Club, Crickets Club, Club Club, and Car Coloring Club.” She raised both documents in front of the jury. “It’s the same list.”

A collective gasp emanated from the jury.

“Just like in the TV show!” one of them yelled.

“So what?” Daphne retorted. “I’m not allowed to join the same clubs?”

“What grades did you get all throughout college?”

“Just like me. You adopted – nay, stole – my lifestyle. In my memoir, I talked about how the A-grade is overvalued in our society. Soul-crushing, even. And that I ended up being happier because, rather than exhaust my mental health trying to be the best, I made sure to include leisure activities to alleviate the stress. A great way to manage my time and whatnot.”

“Right! You wrote a book about how to live a happy life. Do you not want people who read it to be just as happy?”

“Not in the exact same way! There are other clubs you could have joined, but you went ahead and rode on my coattails, filling in the footprints I had left behind.”

“If you ask me, it sounds very petty of you to be so upset that someone else found a stress-free lifestyle the same way you did. And I may have joined all the same clubs, but I made different friends. I bet you can’t name a single mutual friend between us. Isn’t that different enough?”

“As different as that may be, you continued to follow in my footsteps after graduating with the same degree. You took a year off and traveled all over Europe, going to every destination I mentioned in my memoir. It’s all over your social media. You can’t deny it.”

“I don’t deny it. But how could I not see all these sights you mentioned? Big Ben. Stonehenge. Loch Ness. Louvre Museum. Trevi Fountain…”

“All visited in the same order that I did.”

“But did I pose in the exact same manner? I don’t think so! Like you said, it’s all over my social media. Boom! Roasted!”

“Order!” the judge said. “I would like to remind everyone that this is a court case, not a roast!”

“All right,” Tiff said. “But what then, Daphne? What did you do once you were finished with your year abroad? You came back to the States, and then what?”

“Ugh. I just know you’re gonna turn this against me, but I got an RV and started living a kind of nomadic life.”

“Which is exactly how I lived! And need I mention the destinations along the way? Yosemite. The Grand Canyon…”

“All right! We get it. I went to all the same places in the same order. Is that a crime? Just seemed like a convenient route to take!”

“And that’s not even the clincher. Look at you now, representing yourself in court as opposed to using a lawyer. Just. Like. Me.”

“Oh, please!” Daphne said. “Even if I hadn’t read your book, I would’ve been just as wary about hiring a lawyer.”

“Face the facts, Daphne. You followed the same trajectory I did, wrote about each milestone and destination, and posted and blogged about it all. That’s pretty much just rewriting my book!”

“Different media! I think we need to really ask ourselves, ‘What is a book?’”

“Enough!” Zelkins shouted. “This whole thing is a farce!”

“Sorry,” Mike said. “I had chili dogs with the popcorn.” The rest of the jury stared at him with raised eyebrows. “Well, not mixed together, but… Okay, yeah, I mixed them together. So sue me! But not actually. That’d be kinda ridiculous, don’t you think?”

“Everything about this is ridiculous!” Zelkins said, throwing the gavel forward, nearly hitting Tiff. It made a hard thud on the floor, the sound echoing briefly. “What are we doing here? These places are supposed to be about making a difference. What happened to all of that? You know what? I quit. I’m gonna go back to school, join some clubs, do some traveling…”

“Me too!” a juror said. In fact, all the jurors started nodding along.

“Can we have our phones back?” Mike asked. “I wanna buy this memoir now.”

“Sure,” Zelkins said. “Whatever. You can all have your phones back.”

“Sure. Not like I have much of a choice at this point. And anyway, at this rate, it seems like I’ll be making back what I could’ve potentially won anyway.”

“Wait a minute. All that time arguing, and you’re fine with all these people following in your footsteps? This was never a real lawsuit, was it?”

“In a way, it was, if a lawsuit is defined by the bucks one can get.”

“So that’s it, isn’t it? All about the money. More publicity, more sales. Bad publicity doesn’t exist, does it?”

“You silly humans and your sayings. Money is great, don’t get me wrong. But for me, it’s also about the influence. I feed off of it.”

For a brief second, Tiff’s eyes turned a completely cold blue. Daphne gasped and looked at the jurors exiting the courtroom.

"What?! Wait, was anything in your book true?"

"I guess you could say I made it true through you. After all, fiction can be made real by those who want to make it real. The perceiver of the page: your eyes. Funny how lesser beings can believe a life."

Nobody turned around. They were all set on repeating the path of their manipulator, boosting the book’s sales in the process.

“Silly Daphne. I already got what I wanted out of you, and you already bought your copy. But there remains one question…” Tiff picked the gavel up from the floor. “How many hits from this does it take to make you bleed some brain from your eyes?”

Author of fantasy horror comedy novel Lemons Loom Like Rain, which is available on Amazon. You can also read excerpts at stevenshinder.com and check out facebook.com/StevenShinderStorytelling.

More stories from Steven Shinder and writers in Fiction and other communities.