by Courtney Snyder 5 months ago in Short Story
Report Story 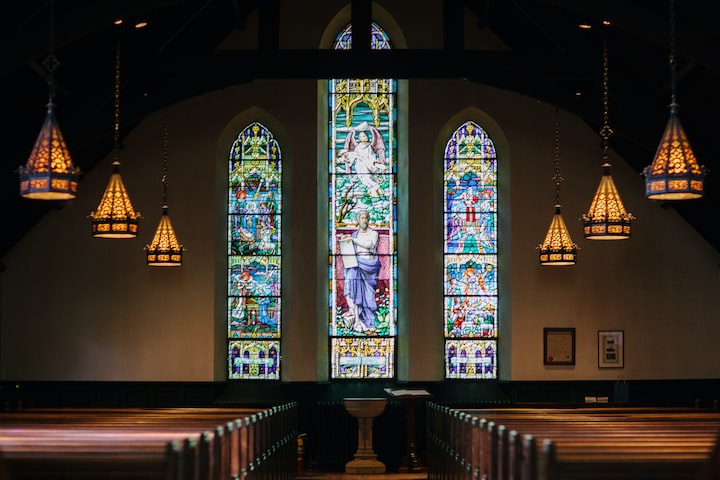 Photo by Karl Fredrickson on Unsplash

“Forgive me, Father, for I have sinned.”

The boy folds his hands together, slightly fidgeting in the wooden chair. The words come out robotically, a recitation. He does not truly know what they mean, only that he has to say it. That’s what his mommy told him to do, and he always listens to her.

Father McCann stares intensely at the eight-year-old boy before him, barely registering the words coming out of his mouth. He is an older priest, with wispy grey hair and wrinkled hands. He wears a white alp adorned with purple, a symbol of the Lenten season. He smiles at the boy as he confesses, examining his features. He’s a cute little boy, with dimples and wide, doe-like eyes. Yes, to Father McCann, the boy is very cute indeed.

Father McCann has had an unusual life, one full of sermon and service. Pressured into joining the seminary by his family, he went there straight after graduating high school. “Serve the Lord, son,” his parents would say. “And make us proud.”

Yes, he made his family proud.

But, what his family didn’t know is that he had a secret. A terrible, horrible secret, that only him and the Lord knew.

The boy finishes his confession, staring expectantly at the priest. Father McCann snaps out of his trance, pretending to listen instead of being caught up in his own fantasy.

“Well, my boy, the Lord knows that you’re truly sorry for your sins,” He says, nodding his head solemnly. “You’re a good boy, just try to do better from now on. Your penance is ten Hail Marys.”

The boy whispers a word of thanks and hops out of the chair, happy that the ordeal is finally over. He hates face-to-face confession; it makes him uncomfortable. He never understands why Father McCann always insists on it when he comes in.

“Oh, and my boy,” Father McCann adds, making him stop in his tracks. “Once you're done with your prayers, meet me in the back room.”

“Okay, Father,” The little boy shrugs, thinking nothing of it. He steps into the first pew and kneels, whispering words of worship. Father McCann watches him for a minute, transfixed by him. He glances at the empty Church, not a soul there. None except them and the Lord.

He goes into the back. The boy follows shortly after.

The boy doesn’t understand what happens next, so he does nothing about it. He doesn’t realize. This must be part of my penance, he concludes. I guess this is normal.

Then, why did it make him feel so bad?

A half an hour later his mother comes to pick him up. Her high heels click up the stairs to the grand Catholic Church. Her long coat is wrapped around her tightly, her tight brown curls blowing in the wind. Father McCann and the boy go out to meet her, Father greeting her with a kiss on the cheek.

“Excellent,” Father McCann grins, the corners of his mouth twisted in secrecy. “You got yourself a fine boy here.”

He rubs his hand on the boy’s head, messing up his hair. The boy stares back at him, filled with a sense of dirtiness that he does not understand.

“Put on your coat,” she tells her son. She holds out her hand and he takes it, hopping down the Church stairs. He glances back at Father, who waves goodbye, eyes gleaming with sick satisfaction.

The wind is bitter and cold, the typical biting frost of a Boston November morning. The boy is strapped in his carseat and his mother slides into the driver’s seat, turning the keys in the ignition. The grey Honda Civic purrs with life and they start down the crowded icy road.

“Good,” she makes a left turn. “Father McCann’s a good priest. I knew it would go well.”

The boy is silent.

He is now ten-years-old.

A year has passed, but for Father McCann, nothing has changed at all. The boy is still as angelic, still as beautiful. A work of God.

He sits in the first pew with his family, dutifully there for Sunday service. His head is bowed and hands folded, shrouded in the tall shadows of his parents. He is silent and placid, indifferent to the Mass.

Father McCann holds a gold chalice in his hand, prepared to consecrate the ruby red wine.

“Take this, all of you, and drink from it, for this is the chalice of my blood, the blood of the new and eternal covenant, which will be poured out for you and for many, for the forgiveness of sins.” Father McCann takes a breath. “Do this in memory of me.”

A chorus of ‘Amens’ erupts from the congregation, a hundred people bowing their heads at once in praise. Hands are tightly bound together, eyes roll down to the floors of the pews. But the boy’s eyes stay up, subtle and defiant. For that millisecond, he and Father McCann make eye-contact, a rope of tension tied between them. Two different feelings tie down the ends, one of desire and the other of disgust.

Father McCann gives a sneaky grin, a giddy thrill racing through his veins. He could almost giggle.

The boy doesn’t break his gaze, and Father McCann notices something he didn’t see before. The boy’s eyes are different. Instead of the childlike wonder they used to have, they have been drained, stripped of innocence and understanding. They are hollow and empty, having lost their youth and vitality. They are the poor eyes of a man many years older. But Father McCann doesn’t care.

He could care less about what the boy’s eyes looked like, as long as they looked at him. He could stare into those eyes all day.

Father McCann thinks it's time for another Confession.

It goes on for years.

The boy is now a young man, nearing the ripe age of fourteen. With age comes wisdom, and he is finally old enough to connect the dots. He knows what Father McCann is doing to him. He knows it’s not right. He shouldn’t be gripped with an indescribable fear when he walks into Church, his knuckles white and face flushed. The eyes of his priest shouldn’t pierce him the way they do, giving him that satisfied glare of sick desire and pride. He shouldn’t be called for weekly Confession by him, and his mother shouldn’t oblige without a second thought. There is so much that shouldn’t happen, yet it does. And he does not know how to stop it.

The boy could tell someone, give a different kind of confession. He could get help.

But he is a priest, a servant of God. Who would believe him?

The choking sense of injustice fills him, the unfairness of it all more sickening than the flu. His childhood was stripped away from him, taken away as if he didn’t deserve it. While his friends played hide-and-seek on playgrounds, he locked himself away in his room, hiding a secret of shame and sin. Now, because of Father McCann, the word ‘priest’ was synonymous with ‘rapist.’ And, worst of all, he knows no one will believe his story.

Because what servant of God preys on little boys?

“What the hell are you talkin’ about?”

His parents lounge on the patio couch, his father’s arm affectionately wrapped around his mother. The sun shines from above, the weather hot and humid. The boy, now of sixteen years of age, sits straight in a fold-up chair in front of them, his hands nervously gripping the arm rests.

“Yeah, honey, what are you saying?” His mother asks, rejusting herself in her seat.

“I…” his voice trails off, thick with sticky emotion. “Father McCann…”

He explains, taking deep, heavy breaths. All the years. All the Confessions. All the abuse. He tells his parents all of it.

“What?” His mother gasps in disbelief. She gives a look to her husband, whose eyes are as hard as stone. Unspoken words are passed through them, a colloquy of air and ambiguity. Suddenly, his father faces him, his expression harsh and repulsed.

“Now,” he stands, towering over his trembling son. “I don't know what’s gotten into you, but don’t you ever go spreading lies like that again!”

“Wha-what?” His son stutters, shocked with his father’s words.

“You heard me,” he booms. “You can’t be spreading those twisted, perverted little lies of yours. Insulting a Man of the Cloak! Why you would even think of something like that is disgusting.”

“But- but-“ He stammers. His cheeks are wet with salty tears, his face flushed with horror. “Mom, mom, you believe me, right? You believe me?”

“I-” his mother starts, nervously glancing back and forth from her husband to her son. Her husband gives her a menacing glare, a dark message encrypted in it. She stays silent.

“Enough!” His father roars, grabbing him by the arm and forcing him out of his chair. “You need to be cleansed from these heinous sins. Come on!”

His father drags him to the car. He resists, desperately trying to scramble away, but his father’s grip is too strong. He gives up, letting his body be dragged like a potato sack. His limbs go slack with the heavy sense of dread, and his heart, rapidly beating, drops down from his chest and straight into hell.

They arrive at the Church.

It is a struggle to get the boy to the doors. He fights tooth and nail, even attempting to bite his screaming father. Alas, he is frail and powerless, and he quickly finds himself thrown into a wooden church pew.

The shuffle of footsteps is the only sound.

“Ah, Gerald, what do I owe the pleasure of your company?” Father McCann appears from the back of the Church, dressed casually in slacks and a black collared shirt. His eyes slide from the father to the boy in the pew, and his mouth stretches into a slight smile, the curves of his lips reading nothing but sinister.

“It’s Johnny,” the father admits, pointing at his son in the pew. “I’m afraid he’s been telling lies. Horrible, tainted lies. You must help him. He needs the light of God.”

“Well, that is no issue,” he smirks at the boy, eyes gleaming with perversion. “How can I help?”

“He needs a Confesion,” the father declares, purposely ignoring his poor son, who is openly sobbing.

Father McCann turns his full attention to the boy, extending his arms out in prayer, his palms to the sky. And, while the eyes that have tortured him for years glisten with excitement, the boy does nothing but cry, his tears the purest form of holy water.

Father McCann speaks, a whisper wrapped with lust and omnipotence.