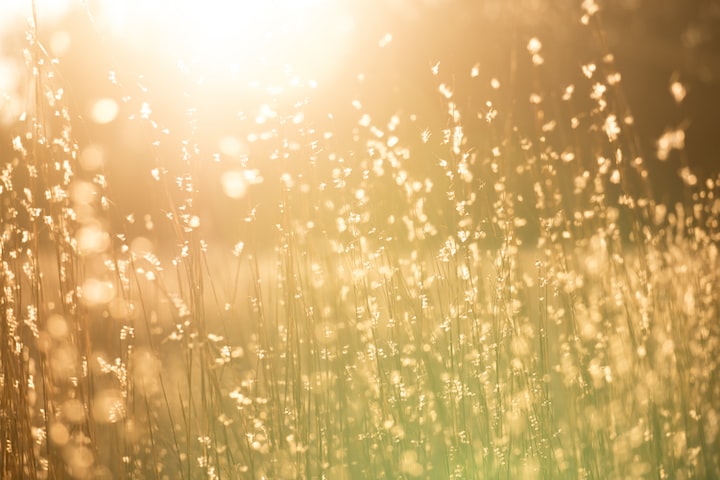 Photo by Kent Pilcher on Unsplash

The thrilling news didn’t come directly to Vik Brennan but in small hints which soon added up to the fact that he and his parents will be leaving their wickedly cramped and unreasonably expensive city heart apartment, to go live in the countryside house his father had inherited not very recently. Vik was certain that after the tragic loss his family had suffered, it was quite impossible to live and interact without grim smiles, bloody eyes and hammer-heavy exhales in a place where his parents once raised their dream child.

Vik remembered that day when all he gasped was, ‘Wish it was me!’ in the far corner of his almost darkened bedroom with that one stick of light dreading through his almost closed door. ‘Has it really been 2 months since that nightmare dressed in a day?’ he thought with a strange sense of amusement and grudge as he slowly dropped the knitting needles into the long, plastic bottle tube.

“Vik, I hope your bag is ready. Just go and get in the van,” whispered his mother after softly knocking the door, “This is the same room where Ian and you used to stay together.”

Vik looked at the entirely empty room. ‘No way I used to live here! I can’t believe I don’t believe it already,’ he muttered in his head. Excusing himself, he left from the entrance without taking a glance behind him and made his way to the grey parked van in front of the building. After his mother boarded on, the van screeched and moved on. Nobody spoke a word during the time Vik was awake.

“Hey! Get up, there’s spit on your chin,” Vik heard his father shaking him awake. After drinking some water his father handed, he left the van with some of the random smaller boxes and walked along the narrow-paved path in the middle of the sunny lawn which led to their log house.

As he gazed at the log house, thoughts tiptoed up his head like, ‘This is such a big house for just three people. How is it so clean, I bet someone already stays here. Well, wouldn’t I know since my parents tell me everything…uhh, I feel like I will hate my room. All I'll do is knit I guess.’

To the patio, Vik climbed the very few stairs and sat down on the top one which was decorated with nice and sunny flower pots some of which were his favorite. Blankly staring at a marigold trough planter, he remembered how his brother taught him the names of all the flowers in a field even though he knew most of them. Just by rewinding one memory, he began to swim through so many soon he realized he was zoning out into the darkness of his bedroom with that one stick of light dreading through his almost closed door.

“Excuse me, Mister. What is your name?” fled a grandmotherly voice from behind him.

Wiping offing his salty tears, he turned and voiced, “Brennan,” to a stooped old woman.

“And how old are you, Brennan?” she asked.

“I am fifteen,” he said, utterly puzzled, “I hope I am not being rude, but can you tell me who you are?”

Vik looked at her opening the main door with so much difficulty she turned her head and smiled at him for help.

Later that night, the family sat down for dinner in a long rectangular table with 7 out of 5 chairs were covered in dust proof plastic. They had their dinner in silence until Vik whispered, “Is that grandma?”

“Can you tell me who she is?” asked Vik loudly in vexation, eyeing the unintroduced tan woman who looked like she was in her late 20s.

“ViiiK! What is your problem?” roared his father.

“Shut up and eat your food. I don’t want to hear another word!” his father stormed down, “After two days, you will go to the local high school.”

Later that night, when Vik read while lying on him bed, his mother knocked and entered.

“That old woman is your father’s mother that is your grandmother, and she is a very sweet old lady, but don’t get her mad, it’s not gonna be a pretty scene,” his mother whispered and good-humoredly rolled her eyes, “That other lady is your father’s younger sister. She is nice too but just don’t talk to her. Don’t talk to them very much, alright?”

“Are they gonna live here for a long time with us?” he asked.

“Yes, but there is no need to speak to them a lot. You can talk to the old woman but try not to engage with the other one.”

Breaking the short silence, he asked, “What is this high schoo-”

“Ok dear, good night,” she waved her hand and excused herself.

“Hello, I am Mary Stone. What’s your name?” said Mary, running towards him from across the street.

“Alright, I just wanted to let you know that I am your new neighbor. By the way, I already met Axir or whatever and ya I don’t like him. Are you like twenty-two?” babbled Mary.

“Oh ho, puberty hits hard, doesn’t it?” she joked with a wink.

“Alright now, I’ll get going. And I think I am gonna go to the saaayyme school as you. That local, you know. Alright, see ya.”

Vik didn’t see her before she introduced herself. ‘New neighbor? When did she see me?’ he wondered. After he reached the log house, he has been surviving in for four months, from school, he told his mother about the uncomfortable encounter with a new neighbor.

“Don’t talk to her, girls of this area will make you do things you’ll regret in the near future. I told you not to engage in anything during your time at this area’s high school,” she commanded.

“You know her?” Vik asked without interest.

“No, but I know that these girls who grew up her-”

“She said she is new. Mary Stone,” he muttered in annoyance.

“Oh, I know her mum, she is such a sweet lady. Helps me out with groceries. I invited her and her daughter for dinner tonight. Be kind and don’t cry or freak anybody out. They are very nice and humble people and Mary doesn’t have a father, so be especially kind,” his mother pleaded.

“You know how her father died? Not that I care or anything but I guess I want to know,” Vik asked.

“If you know how Ian passed away, then you how Mary's father too passed away. Alright? Vik, dear, don’t be rude to the guests tonight, ok?” his mother began whispering.

When Mary and her mother arrived for dinner, Vik opened the door to greet them in. They exchanged pleasantries and Mary's mother crossed the room to help Vik's mother as Vik shook hands with Mary who blushed.

“I have to tell you something about Axir,” Mary whispered as she pulled her hand back from his firm grip.

“The guy I liked. I told you about him on the street. He stole barn owls from my dad's farm. You know,” Mary when on while Vik gave a clueless expression.

“I don't know what you're talking about.”

“Ugh! Whatever, I'll tell you everything again. Won't gimme a tour?”

“Hadn't had a tour myself. Alright let's go then,” Vik murmured with no smile.

Thank you! Thank you very much for taking the time to read my story. I hope you liked it, please leave a heart if you did. Tips are always very appreciated and thank you once again.

Here are some other fictions where the characters mentioned above were featured:

Zara: Enjoy the Sunlight AND Cora AND Zara Kozi, 1921

More stories from Lobna Kowsar and writers in Fiction and other communities.