My Father Use to Say

by Bella Leon 2 months ago in family

A young woman visits her terminally ill father before he passes while thinking about his evil past. 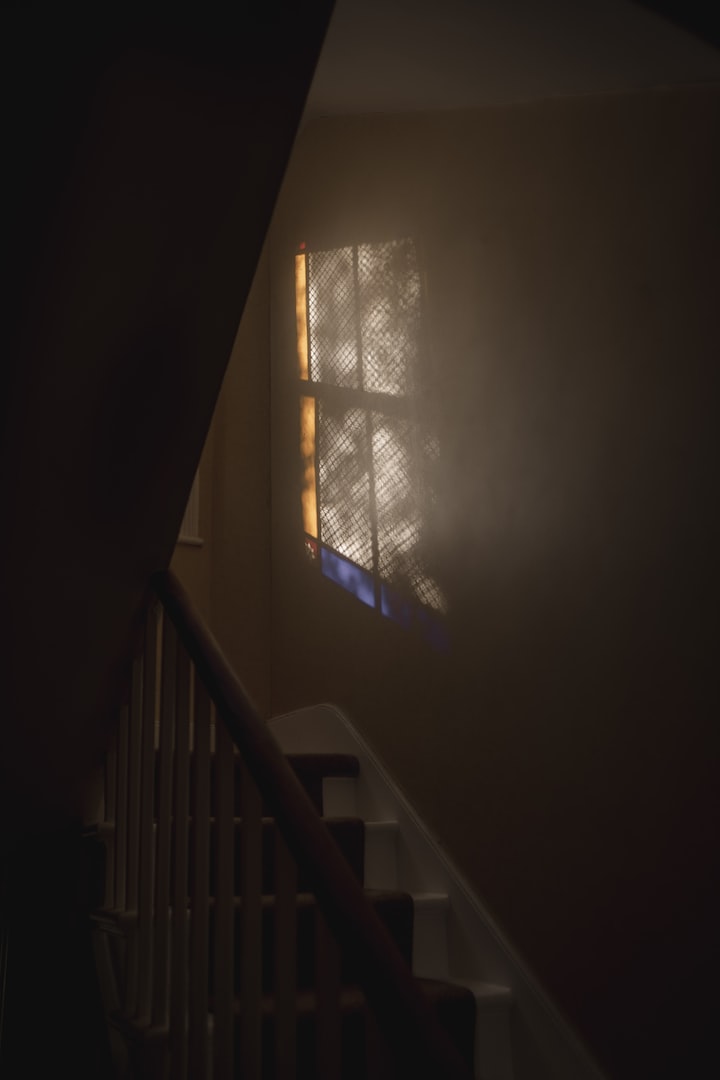 My father use to always say: In the beginning, God created the Heavens and the Earth, but that’s where He fucked up. While the statement reveals much about my father’s cynical disposition, there is a veil of truth behind such smug words. That is, God created the world and he shouldn’t have. Maybe I have inherited my father’s apathy for humankind, but I’ve seen enough of life to have personal supporting evidence. My first example—as I’m sure you’re wondering—is my father. He was born in the “rough” part of New York—his words, not mine. And when I was a child, he always said that his life was hard. Being poor and the son of immigrants, he believed the America Dream was not designed for newly-turned Americans. So, he made himself like everyone else, which wasn’t surprising to hear. He had a knack for being cliche. Then again, don’t we all? He’s my first piece of evidence that God should not have created his Frankenstein—the human race—because my father is scum. Having been the worst father to walk planet earth or whatever else is the equivalent of a father in another galaxy, you’d think I would be the perfect blueprint for a villain’s origin story. But I’m fine; I have a nice job as a designer in the fashion capitol of the world: the Big Apple—doesn’t get better than that, right? I’m married to a nice lawyer, and I have a great relationship with my friends and mother. There isn’t anything wrong with me except the notion of being related to him.

I sat in a taxi that is driving me across the city to visit my father who has laid comfortably in his bed for the past year, awaiting the call of death. For months, my mother has been calling and begging me to visit at least one time before he passes. And apparently, his time is nearing. Sitting in the taxi, I couldn’t stop thinking about common phrases that he spat at me as a child while he roamed the house with a cold beer in his hand. If he wasn’t shaking his fist at the sky and asking God why he dared create such monsters, he was shaking his fist at everything else and asking why humans couldn’t just get it together. My father use to say another thing: You could gain the whole world, but you’re a sucker if you lose your soul in the process. While he, yet again, ruined another famous quote from the Bible, hidden under the smooth edges of each word, he was trying to say that those who let the world get to them are weak. Another reason for my apathy began with my father’s pursed lips curving around words that were like bullets on my skin. He always made me feel weak. Whether it be hands, fists, the butt of a cigarette, aluminum bats, glass beer bottles, or bullet-piercing words, I always felt small near him. He grew up in the rough part of town so he said, but so did I because I lived with him.

The taxi stops near the steps of his home in Upstate New York. The amber leaves of his trees crunch under my feet as I walk into his driveway, floating towards the front door. I knock twice, and wait with the chilling wind. For a second, I peak my head around the corner to try to see if my mother is waiting inside. She had been kind enough to help him through this process despite being divorced for the past decade. When he angered the usual drove of nurses hauled through these walls, my mother would perform the nurses’ duties for them. Today is a different day though. It seems he hadn’t angered nor insulted anyone yet because the nurse with a soft smile and bright green eyes welcomed me into his house. Nearing his bed, I glance at his bedside table where a framed picture of me and my mother sits. I cock my head to the left, unfurling theories about why he placed my picture near his bedside. He isn’t the sentimental type—if you couldn’t already tell. Turning to the young nurse who moves like a ballet dancer through the house, floating and turning gracefully, I ask her a question.

“Did you put that there?”

I point to the photo. She squints her eyes and walks to it, hunching over. Then she shakes her head and shrugs.

“Was my mother here today?”

She softly replies, “No, but I think we should call her to come soon. He hasn’t been responsive for the past few hours. He just stares out the window.”

After thanking her for helping, I walk to his bedside and sit. He continues to gaze through the foggy window where a mosaic of colors burst through the stained glass and onto his pillow. When I was fifteen, my dad began picking up hobbies. My mother called it his “mid-life crisis.” For some odd reason or another, he began staining glass and creating mosaics. He created mosaics like a regular fucking Pietro Cavallini. His favorite creation—this specific green and blue piece—was placed into the window near his bedside when he heard about his terminal diagnosis. He just wanted to look at it, he said to any person entering his home, inquiring about the piece. While he stares, a green light floats across his face like a scar falling from his brow to his left eye. He didn’t move even with the light pushing through thick glass, piercing his vision. Ignoring the scar-like figure, I ask him about his day. Nothing. He didn’t even move his lips to try. The nurse says he’s been comatose, but I could probably annoy him back into existence (not that I cared to).

As I watch the light remain still on his left eye, I feel a tap on my shoulder. It’s the soft-talking nurse.

“Your father is very sweet,” she says.

“He’s unassuming for sure. But sweet and gentle is not in his usual repertoire.”

“You must not have a very high opinion of him.”

“Really? What gave me away?”

Uncomfortable, the nurse sits back in her seat and watches the scene unfold. I lean close to his ear and speak.

“You were the worst part of my life when you shouldn’t have been. And I wish—truly—I could give a fuck that you’re not going to be here anymore. It would be a privilege to be sad by your death like a child is supposed to be. But God fucked up didn’t he?”

I could feel the nurse twist in her seat. I could feel her trying to tarry her emotions. Then he gasps deeply. The nurse checks the EKG, and after verifying his safety, she sits down again. I wasn’t finished with him though. She retreats into her seat, but I’m ready—guns out and bullets flying—to watch him die.

Placing my hand on the framed picture on his bedside, I ask, “Did this sweet, gentle soul ever talk about his kid?”

“No, not really.” She whispers.

The nurse bows her head, tearing her eyes away from him. I continue while looking to him.

“The nurse thinks you’re going to die soon. But you don’t look too bad to me.”

I adjust his sheets and continue, “You could stay a second longer to get an earful from me.”

The nurse stands and slowly exits the room.

“Look what you did? She left. You made her uncomfortable.”

Standing, I turn to the escaping nurse and shout, “Did he ever tell you about the scars he liked to give? It wasn’t presents on Christmas, it was deep cuts and dulled bruises from his fists. Merry Christmas! Bop! And a Happy New Year—you piece of shit.”

“Would you like me to call your mother?” She immediately turns to her phone and begins dialing.

“My father use to say random bullshit. You always tried to prove the world was more horrible than you. Kids are suppose to feel safe when they come home. They’re supposed to be happy.”

The room fills with silence, spilling over the edge like a glass of water scaling the rim of a cup during an earthquake. “Would you like me to leave?”

Ignoring her, I speak again. “My favorite book in school was Frankenstein. I thought it was a really great metaphor. My dad was my Dr. Frankenstein, and I was the stupid beast who loved his master anyways. My dad created me and then he looked at me and gasped. He didn’t want me. Imagine that; an artist who blames the painting for being ugly.”

“Maybe he didn’t like anyone. Maybe he wasn’t such a bad guy. Maybe he loved me and didn’t know how to show it. Maybe, maybe, maybe. I can’t do anything with ‘maybe.’ But I can do something with the memories he left me—the words he use to say and the things he use to beat me with.”

The sun began falling behind the walls of the neighbor’s house. The array of colorful lights—sparked by the stained glass window—flattened and disappeared. Then the green-colored light that fell like a scar across his cheeks dissipated. The nurse turns on a light in the corner of the room. The click of the light became the loudest sound echoing through the empty space. Grabbing my hand, the nurse spoke clearly and loudly.

“I won’t regulate how you feel. I think that’s wrong. I won’t tell you to be grateful for your life or care for the things you do have. I don’t even care if you decide to forgive him. But I just want you to know, Dr. Frankenstein might call his creation ugly, but that doesn’t mean that he actually is. Maybe Frankenstein is just a madman shouting at the sky.”

The nurse lifts her feet and sets them down again but pulls herself up with the momentum of her feet falling to the ground. She turns and walks into the darkness of another room. My father, void of color in his cheeks, remains unmoved and silent. Then he drops his hand to mine and smiles. I watch his eyes flutter. Open. Shut. Open. Shut.

His lips quiver under the florescent lights in the room. The things my father would say had always left me numb, angry, or sad. He didn’t possess the capacity to make anyone happy nor glad to be near him. It’s no wonder my mother finally left him. And to make matters worse, my father is also stubborn and unwilling to compromise his pride for something as silly as an apology—so he says it's silly. I watch his lips quiver, his smile fade, and his eyes flutter towards the stained glass window. I remember the day he made this piece. It surprised me as a child to see him smiling and happy. I had wondered, at the time, how could he love inanimate objects more than his own special piece of creation? But I let the memories of his smiles fade into the flashes of green light that shone on the sides of my arms as the bright, full moon presses against the colorful window. I didn’t move. I didn’t even cry when the green light began snaking through the room and all the light shining on my arms broke into tiny pieces. I didn’t move nor cry, even when the room darkened.