Evolving of a Man 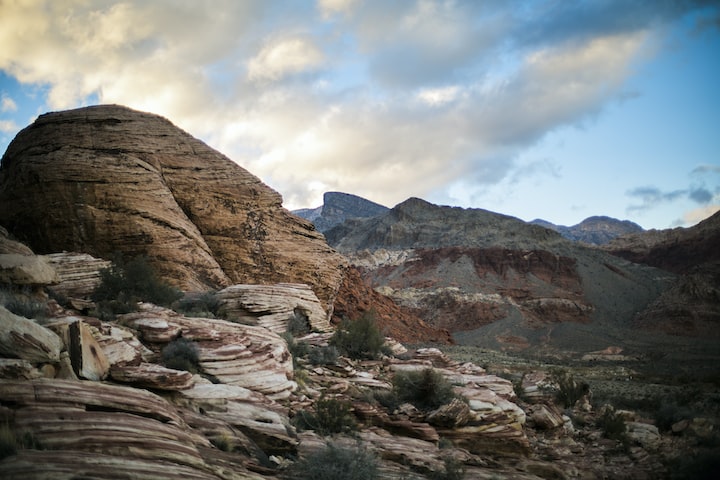 Photo by Kitera Dent on Unsplash

He placed his gloved hand over his brow and wiped. He was hot and sweaty, the work was hard, grinding. His face was smeared with dirt , and his clothes were musty smelling. Five years he had been working in this mine. They had a pretty good haul just a few weeks ago. He lifted his Pick ax and hummed as he sheathed it into the rock above him. He again wondered why the hell he didn’t go to college. His old man was on his case about it, but he was a miner too. His father had mined for the war, tungsten, barite, and lead to make bullets. He had finished high school, and started working for the same company as his pop. It was not that he was dumb, he really liked mechanics and figuring out things. Kids used to bring him their broken bikes and he had this innate talent to fix them, even better than they were. Yeah , he was smart alright, just not book smart. Sometimes he would get things backwards, numbers, letters, and he had to figure out how to make them right. He figured out a system, and from then things improved, but it was too late for college acceptance. Working in the shaft made sense, his father had done it , his grandfather as well, and now he did it, a family tradition. He stopped for a minute and grabbed his canteen. The cool water trickled down his dusty throat.

“ Hey Mac, give us a hand with this will ya?” Jed the Manager bellowed as it echoed through the cave. He lifted his ax and strode to where Jed stood, his big hands scratched and leathered. Dappled in with the rock and sand flashed something that glittered in the light on the overhang. This pile of rock and sand almost touched the ground, and there was only a slight wedge around it to get to the other side. “Bring me another light” Jed said, his eyes on the rock “Get under the other side of it, let’s bring this mess down!” Jed’s eyes were sparkling blue thinking perhaps they had finally hit the Mother load. Mac swung around to the other side and was neatly obstructed from view. Jed was hammering and picking on the front side, grunting as he worked. Mac laughed out loud at the imagined spectacle that old Jed was, a big bulky man with wiry red hair … but it sounded fainter and far away, as if a tunnel had appeared. For a second the sound seemed to echo, and then it was gone.

Mac felt as if he had stopped in time. There was no noise, no laughter, or yelling, or light for that matter, just silence. He felt for his flashlight on the side of his waist and turned it on. The air hung heavily, the smell was different than he had been used to, more musty and old. The mine had changed shape, the overhang was gone, there was a tunnel dead ahead of him. He turned around, and found the overhang gone and another tunnel. “Jed?” he called, then again louder this time “ Jed where the hell are you?” His voice echoed through the shaft, and then was silent.

It was at that moment he heard a mechanical whirring sound. It was faint at first then was louder, He saw a faint light down the tunnel ahead of him, and it was getting stronger. There was not anywhere to escape, he either could run down the tunnel behind him, or stay and brave what was coming at him. He decided to confront whatever it was, weapons ready. Around the curve of the tunnel appeared a flying object round and made of metal, and it was carrying a white box.

Mac could not believe his eyes, what was this thing? He had never seen anything like it. It hovered for a split second, dropped the box and scurried back down the tunnel from where it came. Mac took a ragged breath in and steadied himself. His heartbeat was fast and pounding, he had been ready to fight. He looked at the box, and put his ear to it. If it was some sort of bomb, he was doomed anyway. He did not hear any clicking noises, so he very carefully peeled off the top. “READ ME” it said. He looked below the note to find a paper, so neatly typed, no corrections.

I know this is crazy , but follow the flying object down the tunnel. There are answers to questions. I know who you are, and how you can help us.There are red lines on the walls to make sure you stay on track. We trust you. The card is to scan at the doors you cross. Place the contents of the box in the bag enclosed. See you soon. James

Inside the box were what looked like schematics of a building. There was a small card in a casing. What did the letter mean by scan? He thought for a split second and then put the contents of the box in the bag and laid down his tools, hopefully he wouldn’t be sorry he left them there. He walked down the dust filled tunnel toward where he had seen the mysterious metal object go. Every now and then he would see a red line marking the way. He finally came to the first gray metal door and saw a small pad on the side with numbers and letters. It looked like something out of a science fiction show. He raised the card up to the box and it lit up green and the door opened. He kept on his way until he hit the third door. “This is it” he said to himself, who knows what was beyond that door. The steel unlocked and he peered around the corner. It was a large room with rows and rows of electric lights. It looked like Christmas downtown. Suddenly a figure appeared. “James?”

James was a tall thin man wearing a white shirt , black pants and he had something in his hand, a square electronic object. He looked relieved when he saw him , and also very familiar. “Mac buddy, you made it, I wouldn’t have believed it if I hadn’t seen it with my own eyes.” Mac looked at James oddly”Have we met?” . James smiled, and then looked down at the square object in his hand, he typed something into it . It beeped. “What the heck is that?” Mac asked, “ It is a phone,” said James . A phone? It didn’t have any cords, or dial, how could that be a phone? “I know you are probably feeling a little in shock, but you are now in the year 2022” James said. “Why don’t you have a seat, and I will explain”

James explained that Mac had gone into a wormhole , which meant he had crossed from his time into the future. “ But I was just in 1962.” What am I doing here? He was pacing now.

“You were sent the information to come here, and see the technology we have now. You are going to be a great inventor, but we need things done a little faster. So, someone who knows, figured out how to get you here earlier than you had been originally so we could advance sooner.”

Mac thought about that, he, a great inventor? Why he was a miner, sludging away day after day, He could not believe he would end up doing great things.t James said it was true, he showed him the inventions he had come up with, to help streamline mining, computer programming lines and software. Some of his inventions helped in space travel. He was floored, and after talking about all the future things, he could begin to see why they sent for him, but who sent for him, and how did they know he would be there at that precise time?

“I know what you are thinking, you want to know who sent it to you,” James said pointedly. Mac of course wanted to know. “Well let’s call “ James dialed a number and put the phone to his ear. “Yes he’s been briefed and he is here. I'll put him on” James handed the phone to Mac

“Hello Mac” The voice sounded eerily familiar, too familiar “Who is this?”

Compassionate about people, processes and the human rights of others. I look for the good in people and my glass is half full, whether I fill it or someone else does. I hold a Doctoral degree in healthcare, and am a freelance writer

More stories from compassion24 and writers in Fiction and other communities.