by Deej 11 months ago in Short Story
Report Story 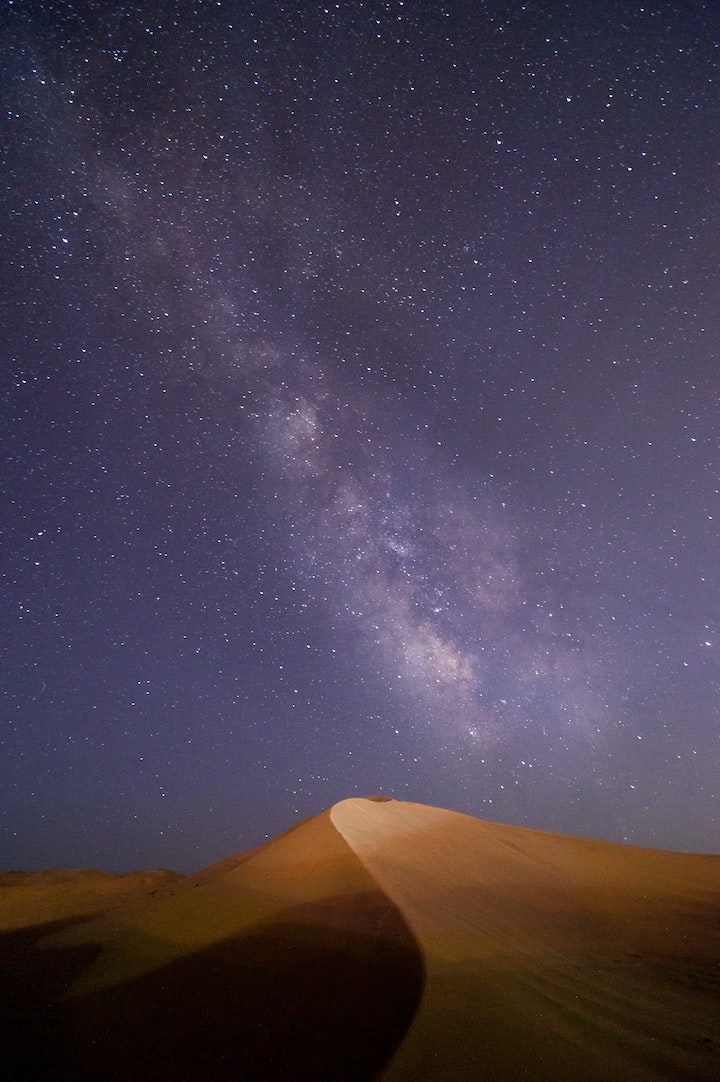 Photo by Jimmy Larry on Unsplash

A wooden crate sits in a warehouse, glad that the shooting has finally stopped. A man sits there, cleaning his mox-rifle. An hour ago the warehouse had been full of men and trucks and boys. Now it is full of ghosts.

The warehouse is on the outskirts of Bazz’oza, “For Gathering,” a jewel in the middle of the Kshiwa Desert. The city sits next to the largest lake for more than a thousand miles—E’bozzi, “The Giver,” whose discovery ended the Long Drought. For this, she was believed to be a divine gift, a miracle. The gods had burned the world, but were not without mercy. They had shed a tear in the desert.

The temples and aqueducts of Bazz’oza were once maintained by a dedicated priesthood. Neutral ground. It was believed that any assault on Bazz’oza would end the miracle, and that E’bozzi would forsake us. Many would put that belief to the test, their blood splattered in the desert while the gods watched, enthralled. They had already reached their verdict. Qez’inna E’bozzi su boti en’quuo. The Giver does not dry up.

In the warehouse there are eight red stains on the floor. Six men, two boys. The others surrendered almost immediately. The boys had been heavily drugged, lifting their dull machetes as a sad reflex, their convictions pale or nonexistent. The rifle fire tore through their eardrums like spakka beaks through twinna-flies.

The man is tired. It’s been ages since he hefted his first machete. Always fighting. Always starving. Always hating. Always too little fuel to burn.

The warehouse doors remain open at the man’s right. They’ve been told to stay open and wait for the button, so they wait for the button. They are trying to admit a breeze, but their powers of persuasion are limited. Mostly it’s just dust they convince to drift in.

The man cleans his mox-rifle with a blue cloth. Outside, a long procession of brooflek tanks and yepspa guns and other vehicles of war are driving past on the Long Road toward the city. The south of town had been heavily shelled this morning. Some of his comrades wave to him as they walk by. He recognizes a few. He waves back, though his hand feels apathetic. Maybe it is the heat, maybe it is the exhaustion, maybe it is the ghosts that hold his hand.

There is a phrase written on the rear wall of the warehouse in red paint: Q’el bez Haziba, “death to Haziba.” Most of the man’s fellow soldiers are Haziba. He is not. He is Bi’raza—a colo’boozi, a “south-rat”—just like the men who wrote that phrase on the wall. Just like the man who gave him his first machete. As a boy he said the phrase many times, learning the shape of the characters before he could read them. There had been a fire to the words then, but today there is only tired resignation. It is a basic fact of life—death to Haziba, death to Bi’raza. Everyone gets on the train eventually.

The last group of vehicles is going by now – trucks and reg-haulers. The man reassembles his rifle and slings a backpack over his shoulder. He puts the rifle strap around his neck and walks to the threshold of one of the warehouse doors. He looks down, noticing a small heart-shaped locket on the ground. Dust has already threatened to claim it, its silver body dim and half-buried. The man loops his knife through the locket’s chain, holding it up for a moment. He then lets it fall back to the ground, surrendering it to the dust.

It is night and the man now sits in the northeast corner of a bar with a drink. No fighting tomorrow. He had wandered in with a few of his comrades shortly after a long debriefing. The bar sits beside the Long Road in a vibrant slum of Bazz’oza. Voices bounce sharply off the concrete walls. The man hopes the roof won’t collapse. He repeats this plea to one or another of his peers in roughly nine-minute intervals. It’s been about an hour and a half. So far so good.

Night traffic on the Long Road is ethereal. How can she hold them all? The endless radio static of a million tires scraping against the dusty road crackles like a burning forest. People drift in swaying, singing clusters. The lights of the vehicles blaze on toward the city. Their engines drum and pull and drum. It is a cacophony of sounds bouncing against the empty desert air. We pray to the gods that the sky will not collapse. A millennium and a half. So far so good.

The ghost of a red fish-line with a small silver hook drifts through the man’s body. It bites the man between his lungs and pulls taut. The tug makes him anxious. It is the boys from the warehouse that pull him. Boys want to impress men. Boys want to use mox-rifles, the fire of their innocence warped into hatred for the libega, the “cockroaches.” Boys have felt things that can’t really be explained to them.

The air in the bar smells like it hasn’t left for days. Loud music pounds against it, buzzing at the edges of the notes. The man decides to leave. He stands up and says a few goodbyes.

“Still worried about the roof?”

He exits the bar. The air outside feels cool for a moment. He watches the vehicles go by. Their lights stare at him briefly, but do not linger—they’ve been told to keep their gaze fixed in the direction of the city and that’s what they do. It’s what they try to do, anyway. All journeys seem long during the summer nights. Some lids droop from long vigils. They can see the shadows of large buildings in the distance. Their rest lies somewhere amidst the giants.

There is a group of flook-cycle taxis down the road to the man’s right. A few of the men see him. They wave. Their hands say, “You want me to take you somewhere?” He waves back, “Yes.”

“Can you take me to the Qi’mrozza camp? It’s northeast.”

During the ride the man watches people walking and sitting and talking. Men sit on small stools or makeshift chairs and smoke as they chuckle outside grocery stands. Ahead there is a smattering of red streetlights that snake on forever.

“I must stop quickly for fuel.”

They stop at a small calcium station. The man gets off the flook-cycle and looks around as the driver walks to the pump. There is another man there and he and the driver embrace, chatting spiritedly. They are both Bi’raza, but the man only catches pieces of their dialect. He leans against one of the pillars supporting the station’s overhang and waits.

The light under the overhang is bright—now the night only exists out there. The man is in a museum surrounded by dark paintings. None of them are very interesting. He’s seen this exhibit many times.

To the right of the station there is a group of boys standing close to a blue dumpster. They are smoking and laughing at nothing, the way that boys do. A man approaches the group. They greet him enthusiastically—they have been waiting for him. He wears a fake leather jacket and fake leather shoes. He pulls a red bottle out of a brown bag, hands it to one of the boys, and smiles. The boy’s hands are small. They tremble in eagerness. The other boys coo and snicker.

They arrive at Qi’mrozza after a few more minutes. Most of the tents stand empty, blending into the darkness. The men who occupy them will arrive long past curfew, as will those meant to enforce the curfew. The man can’t remember if he was supposed to have stayed at camp. He pays the driver too much, but tells him to keep it. He watches as the cycle melts back into the dark. He turns and walks toward a small gate guarded by two men standing next to a reg-hauler.

“How is it tonight?”

The man walks toward the back of the camp. There are several tents there holding prisoners with guards at each tent door. The man wonders if any of the boys will try to escape. There are no lights back here tonight—the power must be out. Not surprising. The guards hold flashlights and stand next to a few small lanterns.

The man walks to his left and then in a wide circle to the back of the prisoner tents. He selects one and approaches it, its brown threads staked into the ground like muscles stretched too tightly. “Q’el bez Haziba,” he thinks—the image rather than the phrase. He sees the warehouse wall. He sees a friend from childhood with a mox-rifle draped around his neck. He sees a man with large hands and a syringe full of creamy fluid. The needle seems to grow and shrink the way it would in a dream. He cuts carefully through the back tent wall and enters silently.

There are eight men in the tent, sleeping on the ground in shackles. Heavy breaths grind through tired noses and mouths in search of air. The man waits a moment until he can see them. The moonlight slants in through a few small openings in the ceiling.

The man listens to his own breathing. The stillness of it makes the details in the tent stand out like a painting of thick, dark oils. The silence seems to be pumping something through his veins. He tries to slow it down, he tries to slow everything down—the breeze, the light, the men with their dreams—but it does not stop the pumping. It just makes it louder. The muddy sway of his thoughts turns to fire, then to stone. He crouches down and creeps toward the men and gently covers each mouth as he slits their throats. Seven more to test E’bozzi’s miracle. The gods watch him, ecstatic.

As he crouches over the last man, he pauses and opens his pockets, searching for a cloth to wipe away his sweat. He finds nothing. It is not until after he kills the man that the cloth falls from one of his pockets, the same cloth he used to clean his rifle. It hits the ground heavily, slowly soaking up the blood and sweat that lingers there. The moonlight watches it sink into another world like a sunset across E’bozzi. Like an ancient Pre-World satellite burning on reentry. Like the tainted touch of Midas.