by Aleks Pavlovic 5 months ago in Short Story
Report Story

A conversation under the moonlight 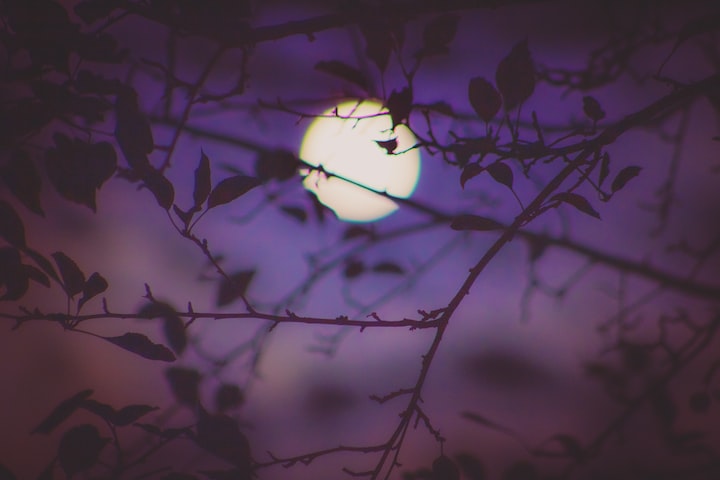 Photo by Johnny Kaufman on Unsplash

“Hi,” I murmur. It’s a lame way to greet someone you haven’t seen in months but it’s all I have. As it does every other time, the sight of Theo has me blinking furiously in an attempt to keep the tears away. I don’t want to cry in front of him anymore. I shouldn’t feel like crying in front of him anymore and yet my teeth are clenched, my breaths are jagged, and my vision is blurred. Although, that might also be from the tequila I spent half the day drinking.

He says nothing in return, his demeanour as strong as it is quiet as he stands before me. His body language had always said more than his mouth, his eyes always expressing his feelings before his voice. Tonight I’m met with judgement as he stares back at me, lips pursed. The darkness envelopes us like a thick blanket, making the silence between us seem so much louder. The only source of light comes from the moonlight that paints my surroundings in an ethereal glow. I lose control over the tears in my eyes and they pour down my face. I feel wetness from my nose reach my upper lip and roughly swipe my sleeve over it.

“I know,” I mutter. “I’m a mess.” Saying it out loud has me closing my eyes in shame. The last time I saw him I told him I’d be better but I’m not. If anything, getting out of bed in the mornings has become harder and socialising with others more of a burden.

I keep my eyes closed for a few moments, hoping it’ll deter him and he’ll disappear so there’s no one around to watch me feed the grief that just won’t dissipate with every day that passes. When I finally open them he’s still there except now his eyes have softened and his shoulders aren’t as tense. I stuff my hands into the pockets of his khaki, wool-lined corduroy jacket that I’m wearing, the one that I had kept despite my sister and mother telling me it was time to get rid of it. If I try hard enough, I can convince myself that it still smells like him. Like the watermelon scented soap he had lifted an eyebrow at when I first bought it for him a couple years ago as part of his 25th birthday gift. It mysteriously kept running out even though I never used it, so I kept buying it. I knew he loved that stupid soap even though he would only smirk and deny it when I pressed him for a confession. I inhale deeply, searching desperately for watermelon, but all I smell is the green earth beneath me, its soil damp with dew. The disappointment is striking.

“It’s been a year,” I hear him say, his voice as crisp and rich as I remember it.

I chew the inside of my cheek and whisper, “I know.”

“You need to move on,” he continues.

I shake my head. “I can’t, Theo,” I repeat, but this time my voice comes out stronger, angrier. The wind picks up, whipping my dark hair across my cheeks. Despite night having fallen an hour ago, I can still see him as clear as day. “I can’t move on from you. You don’t understand. You left me.” A powerful gust of wind has me swaying forward but he’s unflappable, standing before me in his usual attire of black jeans and a black t-shirt. The July air sears into my face but I barely register the feeling as Theo purses his lips and looks away.

My eyes bore into him, silently begging him to say more but he offers nothing further. I feign understanding, nodding as I reach into the hidden pocket inside his jacket to pull out a flask full of tequila. El Jimador. His favourite. With trembling fingers that are so cold it hurts to use them, I fumble with the cap for what feels like a minute under his watchful eye but is probably only ten seconds. Finally unscrewing the cap, I raise the flask to him before pressing it to my lips. The sweetness hits my tongue first but it’s quickly forgotten when the heat flares as the liquor travels through my chest. Despite the winter air wrapping around me in its unforgiving embrace, the tequila warms me from the inside out and I’m grateful for the brief respite from the cold.

“It’s a Tuesday night, Gab,” he scolds, but I notice his lips twitch in amusement. A laugh spills from my lips.

“Taco Tuesdays have been replaced with Tequila Tuesdays,” I shrug.

‘Since tonight,’ I say, but really, Taco Tuesdays haven’t been a thing for the last year. I haven’t stepped foot into our favourite Mexican restaurant since the last Taco Tuesday we shared together. Memories of us in our tiny apartment flood my mind. I remember both of us being exhausted after a long day of work, him still donning his hi-vis and me in my scrubs as we sat side by side at our kitchen bench. We were as close to each other as we could be with his arm wrapped around my back as he ate one handed. We huddled together, leaning over the take-out bag so that we wouldn’t make a mess neither of us wanted to clean, murmuring to each other about our days. It was one of our quieter Taco Tuesdays, missing the laughter and the loud music, but I remember basking in the faint scent of watermelon that still lingered on his skin and knowing that I could spend my nights like that for the rest of my life. Four days later, that future was taken from me.

With tacos and hi-vis jumpers on my mind, I whisper, “I miss you. So, so much.”

“Go home, Gabi.” No longer amused, his words sound like an order.

I shake my head with force, clenching my eyes shut. I don’t want to go home where everything reminds me of him. His clothes that are still hanging on his side of the wardrobe. The towers of novels that would end up scattered around the apartment because he was too busy reading the books to install more shelving. Years’ worth of goddamn photos of us that cover the walls.

“I hate that place,” I tell him. “That place was ours.” My voice cracks on the last word. My face crumples and my chest heaves as I sob. No longer able to stand, I drop, sinking to my knees. The grass is thick and soft beneath me but it’s damp from the condensation that’s collected and it soaks through my jeans. I reach forward, brushing my fingers over the stone that protrudes from the grass. I trace the letters that spell his name, the message his father had chosen about a life taken too soon and his date of birth.

I look up to find him standing behind his tombstone like a sentry, his blonde hair almost appearing white under the moonlight, watching over me just as his parents promised he would. He remains unchanged since that tragic night, destined to be 26 forever.

“You know that I would never have left you if I had the choice.” It’s these words that calm me down, the reminder that he wouldn’t have wanted this either. He had sworn we’d be together for the rest of our lives and if it hadn’t been for the blood clot they found inside his brain too late, he would’ve stayed true to that promise.

I dig one hand into the grass in an attempt to ground myself while the other cleans up my face, wiping away snot and drying my cheeks. I try to fix my hair as well but it’s a battle I can’t win against the wind that is still twisting around me so I leave it be. For some time, I simply sit there and catch my breath looking up at the Theo I remember from a year ago, ignoring the fact that the real him is buried below me. Everything about him has stayed the same; from the few days old stubble I had been begging him to shave, to the calluses on his hands from daily carpentry, to the outfit he had been wearing that night. It’s all the same.

I don’t know how long I sit there with him watching over me as I think of the seven years we spent together but it feels like hours. I’m laying down now, my body atop his grave, the closest I’ll ever be to him again. I know I should feel scared in the cemetery alone at this time of night but I feel at peace with the hundreds of stones that surround me and the tall trees that line the pathway, dancing in the wind only a short distance away. Eventually the wind slows down to a gentle breeze and I get sick of the flask digging into my ribs so I slowly lift myself up to rest on my knees once more. With the effects of the alcohol slowly wearing off, I feel colder than ever so I decide to leave after one more drink with Theo.

When I glance around to find him, however, he’s gone. I breathe through the disappointment and wrap his jacket even tighter around me. With numb hands, I take one last sip before spilling a lick of tequila into the grass in front of me. Although it wasn’t a custom Theo had ever known, I had seen my Eastern-European mother do it every time we would visit her parents in this same cemetery. A drink for me and a drink for them, she would say.

“I’ll be better next time. Happier. I promise,” I whisper into the night, a small cloud of mist forming in the air with my words. I run my hands over his stone once more, placing a kiss atop it. Then, I leave the cemetery guided by the moonlight and protected by the presence of Theo.

Just your average Aussie student that procrastinates from uni work by writing stories. I hope you enjoy reading them as much as I enjoy writing them!

More stories from Aleks Pavlovic and writers in Fiction and other communities.