If the Sky Could Dream…

...It Would Dream of Dragons 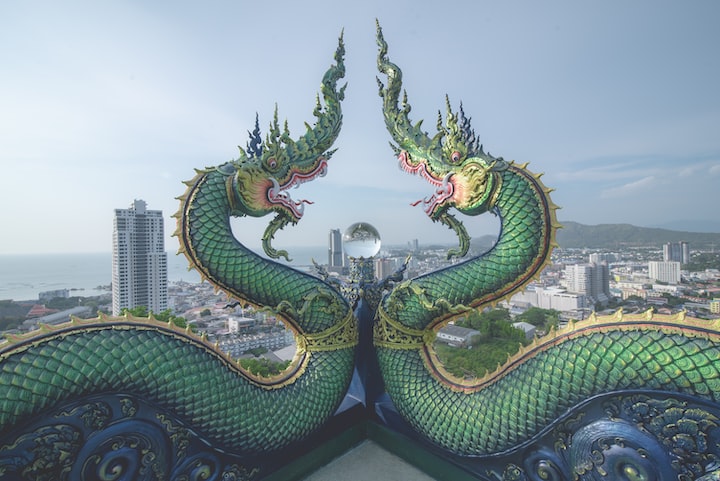 “There weren't always dragons in the Valley.” I always began my introductory lecture to the Joint Exploratory classes the same way. There were a few grumbles from the larger students, but they were too well-mannered to make their voices heard this early in the semester. And that was important, to me at least. I always endeavored to be as partisan and even-handed as possible. If they'd just wait to hear what I had to say...

“There weren't always dragons in the Valley," I repeated. "All of the Earther colonists here on Sigma Draconis 7 agreed on that in years to come. We wouldn’t have colonized the planet if we’d known it was already inhabited, and certainly not by a sentient race.”

That was the absolute truth. There were rules against that sort of thing. And by the time they’d returned, it was too late for us to just pack our bags and leave.

I seemed to have their attention, this mixed class of open-air residential and deep-down transfer students, so I went on.

“All of the original shuttles had been cannibalized, the metal and wiring and other component parts stripped out of the twenty-three ships that survived the descent through the harsh atmosphere. Seven others had burned up upon entry or crashed, blown off-course by the tremendous winds that harry the upper layers of the sky. Even if we’d wanted to leave, there was no way off-planet. We’d been here too long. Leaving wasn’t feasible.”

I waved through the images I’d selected for my presentation. The empty Valley. The wreckage of shuttles. The erection of the first Dome. The first image of a returned dragonship on top of one of the hills. Visuals always captured the class’s attention, which was helpful at the start of a new semester. Of necessity, my lectures took place outdoors, in a nicely-grown grove of the bio-engineered trees that were transforming Sigma Draconis 7’s low-oxy atmosphere into one more suitable for human habitation. But even with the added oxygen, we still had to wear breathers outside.

“The dragons of Sigma Draconis 3, 4, and 7 were space-going, like the human colonists were,” I continued. “But we didn’t know that. We thought the planet was uninhabited. It was uninhabited, albeit temporarily, because the dragons had decamped on a mission of cultural exploration, the major focus of their existence." I made eye contact with a few of the deep-down transfer students in the back rows, where they sprawled laconically. They were definitely paying attention, which was half the battle. I liked to think it was my lecture that had reached them, but I wouldn't bank on it. Gaining the respect of the transfers was always problematic, even after all this time. "We never went below ground," I said, "down to where their manufacturing facilities and larger cities were mothballed while they were away. So, we didn’t know—”

From the expressions on their faces, I could tell that my freshman dragons were exchanging what were (hopefully!) witty comments telepathically. I could just imagine what they were saying. I steeled myself and went on.

“So, the first Earther colony was established three hundred years before the dragons returned to breed, as they do every four hundred and seventy-three years. And since Dragonhome was underground, there was no outward sign of habitation. The First Wave of human colonists chose the Valley for the relative calmness of the winds, which can be fierce here on Sigma Draconis 7. Down in the Valley, which—as we learned once the dragons taught us to speak their language—was the traditional nesting ground, we erected our domes and laid out the roads connecting them, along with cultivating native plants to provide additional foodstuffs for our growing population. Those domes turned out to be what saved us.”

Until the inhabitants of the Tucson Dome woke to find the sky blotted out by a giant reptile perched atop the geodesic bubble. Apparently, Tucson Dome was erected right on top of the Firedrake clan’s traditional family hatching grounds. In the early days, a few ignorant humans claimed she’d landed on the dome thinking it was her old nest, but that is patently absurd. Dragons are far too intelligent to be fooled like that. Tucson Dome was simply in the wrong place at the wrong time.

Luckily, the structure was too strong to be crushed by the thirty-five ton mama-to-be. As were Kyiv Dome and London Dome, although Zanzibar Dome took some damage.

“Allow me to elaborate on our situation in those early days,” I went on. “We had inadvertently landed on an inhabited world. Our vessels were incapable of taking us any further into the solar system to search for another home. And the temporarily-absent native species had just returned for their breeding season, which would last for the next two hundred-odd years. Somehow, we had to make peace with the dragons. We needed to find a way to reach a détente, to allow us to cohabitate on Sigma Draconis 7. Socio-economically, politically, and culturally, our two species were definitely at odds in those early days. But a few forward-thinking dragons—and the humans they bonded with telepathically—made that possible. Over the next six months, we are going to take a deep dive into how that was possible, and how the connections laid out in those early days of dragon-human relations allowed both species to survive and thrive on this one small planet. For our next meeting, we’ll explore the reptilian-brain interface developed by the dragons to allow us to communicate. Please be sure to bring your textpads. Class dismissed!”

"If the sky could dream, it would dream of dragons."

Thank you for reading! Likes, comments, shares, follows, and pledges are always cherished.

Author's Note: This story is respectfully dedicated to the many teachers, professors, and students who fill my world. Thank you all!

I have challenged myself to write twenty-seven dragon prologues/stories for the Vocal.media Fantasy Prologue Challenge, one for each day the challenge runs. Here's a link to my next entry:

Hillora Lang feared running out of stuff to read, so she began writing just in case...

While her major loves are fantasy and history, Hillora will write just about anything, if inspiration strikes. If it doesn't strike, she'll nap, instead.

More stories from Hillora Lang and writers in Fiction and other communities.