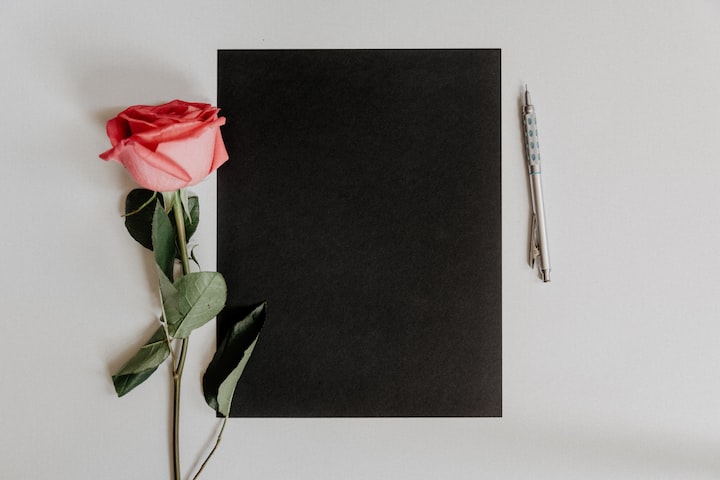 Janie liked to describe herself as a woman of words. At age 22, she finished her creative writing degree, decided to move back in with her parents in order to save money, and she very quickly realised life after education wasn't as glamorous as she'd hoped.

She dreamed of finishing university, saying goodbye to her sweet, old, retired-author professor who loved her work very much, and she'd be able to jump straight into the world of fiction by publishing her novel and becoming super-duper rich.

Alas, it wasn't meant to be.

Janie's life after university was a lot more mundane than expected. A lot less broke too. Working at the local café of the corner of the highstreet - unimaginatively named Corner Café - Janie found herself too busy to write. The endless rota of shifts and the early opens and late closes had taken it's toll of Janie.

There was one other issue that Janie found herself struggling with. One week ago her relationship of four years ended on a random Wednesday.

He ended it, said some truly horrible things, and for once in her life Janie realised she was no longer a woman of words. She was speechless. Her fiction-filled brain was void of any writing prompts. Her crazy imaginative brain had dried up into the size of the raisin, and the only thing that occupied her mind was him. She didn't even want to say his name - it simply hurt too much.

It was on Day 21 after the breakup when Janie decided to pick up a pen again.

Her boss had caught her crying in the storeroom, bags of coffee beans and endless stacks of "buy six and get your seventh free!" cards surrounding her as she sobbed. After explaining why she was crying, and apologising profusely for it, Janie's boss insisted she take the afternoon off. She agreed, grateful for the compassion her boss had shown her, and then he said something before she left that made her smile.

"You know, what you told me about your breakup, you said it so eloquently. You should write poetry or something, kid."

And so she got home, and she did.

She grabbed her favourite notebook and a brand new pen, and wrote her first instalment of The Hurting Heart Poetry:

"I guess it's true what they say: strangers to lovers to strangers again.

It's difficult turning over to an empty bed, hands outstretched and searching for a body they will never meet.

What a fool I was to confuse your lust with love and hold it dear to my heart,

I should have known then that I was a miracle to you for all the wrong reasons."

Janie sobbed as she wrote. The tears ungracefully splattered onto the page. She wiped her eyes and waved her handkerchief like the white flag she knew it was - heartbreak had won, and she was the surrendering soldier standing on a parapet.

Time passed and although the heartache softened, Janie often thought about her ex-boyfriend. She didn't dare date again for fear of even more heartbreak, and she tried to come to terms with being alone.

Immediately after the breakup Janie had decided to cut off any contact. She had thought over and over about messaging him, expressing her pain to him instead of writing it down in a notebook. She wanted him to feel how she felt, she wanted him to know what he had done to her, but she knew it would be useless. He had never cared for her words, never understood the craftmanship or the beauty of it.

It was on day 53 that Janie wrote another addition to The Hurting Heart Poetry collection. He had liked a picture she had posted on social media, the first piece of contact they had had since that random Wednesday.

"So turns out you're social media sneaking, how come I live in your mind rent free?

Checking out my life from afar, turns out that's all you get to see.

Shame you used to know every second, know the stretch marks on my skin and the way I drink my tea.

I wish you could still be in my life - it could go back from me to we."

In the following days that came, Janie cried herself to sleep most days for two weeks. She was sad about being sad and she was sick to her stomach about how her mind worked. One day she would yearn for him back, the next she'd recite every bad thing he ever did to her and she would remind herself that she could never go back to him. It was like an internal game of mind-tennis, she she was fed up of watching the eternal match.

It had been the first Christmas Janie had spent single in a long, long time but she realised she didn't mind. Her family was all she needed and she was truly happy again.

Janie was on her lunch break after a quiet morning at Corner Cafe when she decided to write the last entry to The Hurting Heart Poetry collection.

"I lost my sense of self trying to create us.

I moulded myself into the tiny crevices of empty space in your life and lived there.

Not peacefully or happily, but I lived there because it was the only way I got to be yours.

But now I'm free to be me and I take up all the space in my own life,

I will no longer let myself be the shadow to someone else.

I will no longer live for someone else's life.

And I will no longer let my heart hurt."

If you enjoyed this story then please make sure to leave this article a little heart to show your love! Any tips, subscriptions or even a pledge would absolutely make my day - but no pressure!

More stories from Leigh Hooper and writers in Fiction and other communities.