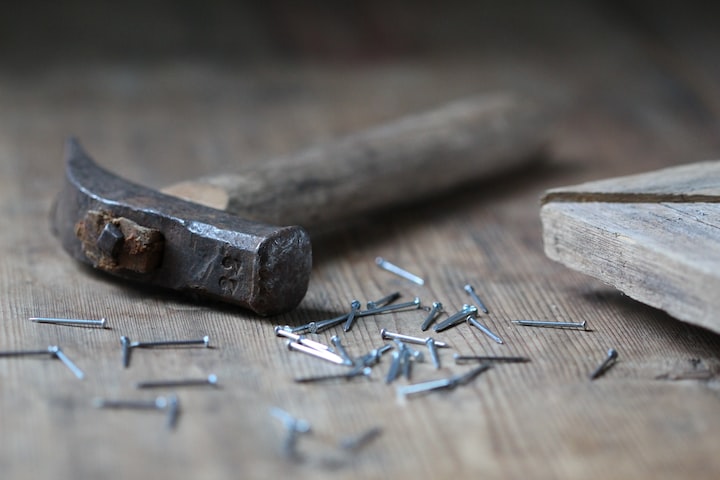 I've been told I'm a hammer. I have a flat face, a prong in my back, and a handle to hold so I'm a hammer. But I'm not a good one cause I have doubt and once you do that you aren't a good hammer anymore.

I’ve done the job. I’ve plunged nails into two-by-fours over and over until two-by-fours became homes. It's a good job. a glorious purpose, and I know that. I do. I just don't feel anything when the Carpenter grabs my handle. The droning sound of my face colliding with the head of the nail is just monotonous noise. I don't get that euphoric feeling the other hammers exchange stories about. They get aggressive whenever I mention this.

I learned to stop mentioning it.

I could hammer for the rest of my life if I had to. It’s not that I don’t have the ability. Like I said I've done it so many times before. It would be an easy life, a safe life. But when I think about doing that I feel a part of myself, some deep vital part of me, start to slowly die. Like it's falling asleep and when it finally does I'll never see it again.

"Screwdriver, what do you feel when the Carpenter calls on you?"

"Me? Oh, hmm, well doll, I guess I feel proud. I only feel that afterwards though if I'm being real with you. I won't lie it's kinds of painful when you're in the middle of it. I know you hammers are kinda dull on the face so you don't feel the impact when you hammering but my head gets twisted every time the Carpenter turns me. It's a fight against me and the screw. I always win, duh, but it hurts like you wouldn't believe."

"Have you ever thought about being something else?" I ask.

Screwdriver's laugh is like a burst of air being shot out of a cannon. She's noramlly like that but this time has extra oomph behind it.

I'm really not sure what I mean. The thought of being anything else is so weird and unnatural it's hard to imagine. But it also makes something in me, that part I don't want to go to sleep, stir and start to wake up.

Screwdriver gets quiet for a bit.

"I wouldn't go around saying this, but I guess yeah, when I'm in the middle of turning the screw and it's wedged in so tight I feel my head's gonna bend. It sometimes helps when I imagine I'm doing something else. Maybe something less aggressive like Tape Measure. I've always thought that would be nice."

We left the conversation at that. Our visit in the toolbag as the Carpenter took us to the next job was coming to an end.

I've wondered if I'm broken. I’ve seen it happen to others when their flat face gets chipped or their prongs get bent. It doesn’t happen often but it’s definitely possible. If I am a broken hammer, I don’t know how to feel about it. Broken hammers don’t get yelled at for being broken. It’s not your fault if you’re broken. Someone or something had to break you. But if you’re broken and you can tell you’re broken, then you know you're worthless and that's worse than feeling nothing.

I don’t want to be broken but I can’t think of another reason for this incessant apathy.

I laugh at the idea that maybe I’m a screwdriver. I’ve been friends with a screwdriver for a while. Their life doesn’t seem so bad even with the painful part. At least I'd feel something while fighting the screw. They seem happy with what they do and what the carpenter does with them. Please don’t take this as being ungrateful. I know the good that comes with hammering and I'm truly honored the carpenter allowed me an existence. I've seen the happiness that's come from our buildings. I just wish I could keep some of that happiness for myself.

Dylan Ritch is a fiction writer whose stories reflect the human experience using genres such as Fantasy, Horror, and Sci-Fi. Ritch's stories strive to be equal part thought-provoking and entertaining. Enjoy and happy reading!

More stories from Dylan Ritch and writers in Fiction and other communities.