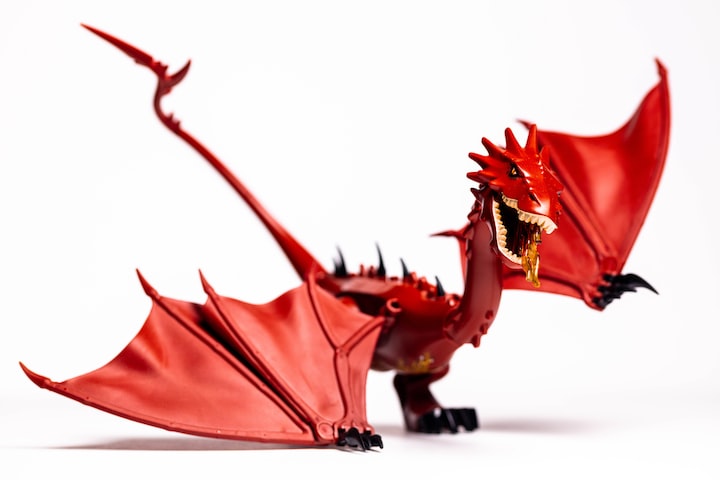 Photo by Matthew Ball on Unsplash

Have you heard of the Dragon Squad? The four member dragon squad , have mission to save Big Daddy.

Mr. DoDo head was a mad scientist, who was trying to find out the secret

power source of the dragon squad.

Big Daddy was the leader and father of the members of the dragon squad.

Big Daddy got captured while he was shopping at the local shop Mart.

The red alert alarm of the dragon squad started beeping.

Dragon Squad power up. There was a pink dragon, red dragon ,teal dragon

They all met up at the headquarters, up in a mountain cave. They used

their computer to search where Big Daddy was taken, by f0llowing the spy

The strange car disappeared at a dead end alley way.

“ Now what ?” Teal dragon asked his brothers and sister.

“ We need to go to that alley way and check out what happen?” Orange

They found there is a underground hide out , under the alley way by using

their sensored gadget. The gadget could also see thru concrete.

“ Looks like the dragon squad found my hideout. They cannot get in here, I got Booby traps everywhere for them! Hahahaha” said DoDo head with his cracking and irritating voice.

“ My kids are smart, They will get thru all your booby traps.”

“ If you don’t tell me where those kids get their power from , by the time they get thru the booby traps , you will be a goner, cause the last trap activate this chair to fall in this shark tank. You will be my Shark’s happy meal.” Mr.DoDo head told Big Daddy , while living the Shark room of his hideout.

Big Daddy was trying to get himself untied from the electronic chair, that is moving closer and closer to the Shark tank.

“ Boss, if your booby traps kill the dragon squad, how will you know where their power came from?” Asked Albert, the pet dragon.

“ You are right , go up there and get one of them, get the one in the pink dragon suit.” Commanded Mr. DoDo head

“But boss , I am scared of the dragon squad.” Albert looking fearful of his task ahead.

“ Now, go up there and get the pink dragon!”

On the way up there, Albert was not paying attention and fell in one of the trap.

“ What a nincompoop of a dragon, do I have to do everything myself?”

He was in a hurry to get to Pink Dragon ,before she fell into the trap that he accidentally bump into the master trap botton and stop the booby traps all together.

“Wow, that was close, I would have been a goner.” Red dragon whipping his imaginary sweat from his forehead. Red Dragon like to over dramatize everything.

“Quick, I think the traps are deactivated. “ Teal dragon shouted to the squad in a whisper.

They search thru the hideout for Big Daddy.

Will Dragon Squad get to , Big Daddy in time?

Stay tune for the next episode of the Dragon Squad.