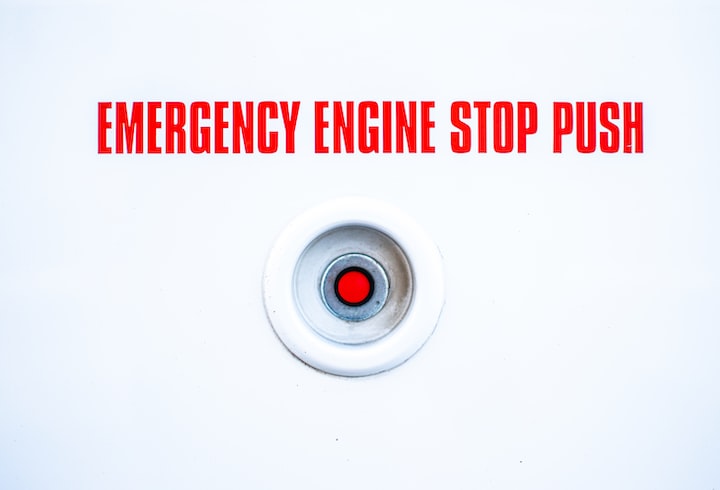 “Open the door you coward!”

“Not a chance…you all need to calm down!”

Cries from the crowded carriage got louder and increasingly desperate, “Open it right now!” “Why aren’t we slowing down?” “Tell us what’s happening!” “If he doesn’t open that door, I’ll break it down!” More and more people were trying to push their way forward.

The young man stood firm in the driver’s cabin of the train and folded his arms, resolute that under no circumstances was he going to open the door. He glanced at the speedometer which was steadily rising above 80mph and had blown through quite a few stations whilst this standoff escalated.

An angry looking woman kept pounding at the door, later identified as Maria Moore, looked him dead in the eye and mouthed “fine”.

She turned to the crowd waiting behind her, motioning them to take a step back.

Maria then spun back to the man stood safely behind the locked door and smiled through gritted teeth, “See, everyone’s calm. We’re calm, you’re calm, everything’s just fine. We just want to talk, maybe we can help. We can get you whatever you need, and then we can all get out of this alive. You’re the one in control here.”

‘Get you whatever you need? You’re the one in control?’ oh god, they think this is some kind of hostage situation. The man, later identified as Mitchell Hayes, swallowed hard and knew the jig was up. He cleared his throat and muttered,

“I…I don’t know how to drive a train”

“Sorry, what did he say?” someone from the crowd spoke up.

Maria stepped closer to the door, her face filling the rounded window, “You what?”

“I’m sorry, I can’t drive a train! I just woke up in here, I, haven’t even got a driver’s license.” Mitchell let out an involuntary laugh of relief that he had finally told the truth. He took off the driver’s hat that he’d found laying on his lap when he woke up. He’d only put it on for a laugh. He would have taken a selfie in it if he hadn’t lost his phone, ‘That’d show ‘em’ he thought…‘Mitchell Hayes in a uniform, who’d have thought’. Not his Dad, that’s for sure. Unless it was a prison uniform, which unfortunately Mitchell had also sampled.

He held his hands out in a ‘it’s kind of funny when you think about it’ sort of way, and said,

“’We’ll all laugh about this one day’ that’s what my gran always says when these sorts of things happen.”

“When these sorts of things happen?” Maria felt herself go bright red. She tried to contain her anger but failed, “You can’t drive a train? You mean, you aren’t the driver of this train?”

“SO WHERE IS THE DRIVER?” Maria screamed through the window making Mitchell jump.

Mitchell shrugged and looked around the tiny cabin as though he might have missed a whole other person being in there with him. He thought opening the first aid box was a particularly nice touch - it showed he really had looked everywhere. He carefully avoided moving anything else in case he made things worse, especially the big red button encased under a ‘Do Not Press’ shield. ‘Why even have it if you aren’t supposed to press it?’ he murmured to himself, unconsciously flipping the shield up and down as he spoke.

“My bad guys, I should have come clean straightaway. But hey, at least now you know and I for one, feel so much better now the truth is out.” That was a lie, Mitchell didn’t feel much better. The angry passengers were right to be worried. The speedometer was ticking over 100mph now, which even Mitchell knew probably wasn’t ideal.

“We’re gonna die, we’re all gonna die!” someone yelled from the back of the carriage and Maria saw several people drop down to help a man who had passed out in the small space.

“Now look” Mitchell yelled above the rising rumble of the train, “I’m going to come out, and who ever is supposed to be driving this train, can, you know, come do that. Which by the way, was supposed to be their job so…” Mitchell shook his head in mock judgement,

“I mean where are they, why aren’t they here? None of this is actually my fault” although he knew this assumption was also, most likely, another lie. The last thing Mitchell remembered was going out after the game with his work buddies, and those nights always got pretty wild. Well, he assumed they were wild, he could never really remember what happened and relied on selfies and incriminating video’s to piece the night together. He couldn’t wait to tell the lads about this one.

‘Hey Mitch, where have you been mate?’

‘You will never believe this lads’

‘Tell us all about it mate’

‘Okay, so, woke up feeling like I needed to throw up, right? Everything around me is moving, I think ‘oh great I’m still drunk’. Turns out, I’m on a train, in the driver’s seat, all these crazy people thinking I’m in charge of the thing. And they’re all angry because it missed their stop or whatever. Hilarious right! And everyone’s yelling at me to stop the train, and they think I’m actually the driver because I’m wearing the uniform. And so there I am, looking around trying to like I dunno, find a brake? What does a train brake even look like? And I’m pulling levers and pressing stuff and so its getting faster and faster and I can see the stations flying past in a blur and they’re yelling and yelling and I can see how afraid they are, and it’s making me really scared because I don’t know what the hell I’m doing and they’re all looking at me like I have all the answers and they think I have them because I look like I do. But I don’t. I don’t and I’m a fraud, a total fraud, and everything my Dad said was right, I’m nothing but a screw up and this is the worst screw up yet and now I’m going to die and all these people are going to die because of me and because I can’t stop this train….’

Mitchell cut short his own runaway thoughts knowing that they weren’t helpful. They never were.

He looked into Maria’s eyes, seeing past her anger for the first time, straight through to the truth. She was scared. So was everyone else. Their yelling and screaming and all the noise was just fear leaving the body. They needed to get it out. He understood. He felt the same sometimes. Mitchell found a strange sense of clarity in the fear of others. More so than in his own.

As the train crept toward 150mph and yet another town blurred past, he knew what he had to do.

“How many people are on this train?”

The question stirred something hopeful in Maria. At least it was something, some small way of being useful, of being in control. Even if it was just getting an answer for the idiot locked in the cabin. The actual driver was either missing entirely or not coming forward. She turned and passed instructions throughout the carriage.

“Hey, you there, guy in the white shirt. Yep, you. Go count how many people are in each carriage, quick as you can. What are you waiting for? Go!”

He paused for a moment, and then with a ‘may as well’ shrug, walked off down the train.

“And you, with the glasses, ask everyone again about the driver! They have to be somewhere on this train!”

Maria comforted the people around her, trying to hide the increasing fear in her eyes as they hurtled through yet another town. Other trains would blare their horns, at one point she thought she saw a helicopter hovering above, but the motion made her feel too sick to look for long. It was the roads they crossed in a blur that scared her the most. Would they have put all the barriers down in front of the tracks in time? Some roads didn’t even have barriers, what if there was a car crossing or they derailed or…She couldn’t think about all that now. Her world was a train carriage with adverts for vitamins and some new dating app.

“170 give or take” the guy in the white shirt called over the crowd of people who had pushed themselves into the front carriage in a vain attempt to reach the driver.

Maria tapped on the window to get Mitchell’s attention, “200 or so, including everyone in this carriage.”

Mitchell nodded, “Ok, move them to the back of the train, far away as possible”. He flipped the button shield back and forth, back and forth.

“What?” Maria’s look of confusion quickly changed to recognition and then acceptance.

Mitchell cut her off, “We’re kinda in the danger zone here” knowing it was the most badass line of his life. He waved nonchalantly across the control panel, which was lit up like an ‘imminent death’ themed Christmas tree. His hand hovered over the huge red button. If every TV show was correct, the big red button was the kill switch, the final boss, the one you were told never to press…the button Mitchell assumed would stop the train when all else failed. He laughed at the irony. How many times had he pressed the big red button in his head?

And let’s face it, it had never ended well.

That time he decided to ‘fly’ from a first-floor window and broke his leg. The time he tried to jump his bike over Cousin Dylan and they both got a concussion. Stealing that car, the ‘big red button’ that landed him in prison. His entire life felt like one big red button after another. What was one more?

“Hey uh, you haven’t seen a phone anywhere, have you?”

“No” Maria looked around but couldn’t see anything other than a few old newspapers and rubbish people had left behind as they moved to the back of the train.

“No worries” Mitchell nodded, “Woulda been nice to text some people, you know?”

“What would you even say?” Maria asked.

Mitchell shrugged and flipped the shield one final time. One life for two hundred, give or take, seemed like a fair trade. Especially when he was the only passenger on the train that day that wasn’t meant to be there.

Maria followed the other passengers to the back of the train and wondered if anything, anyone ever said really meant anything. In this moment it seemed like it was actions that were really all that mattered. She looked at the crowd of passengers pushing their way to the back of the train and felt, of all things, grateful. Of all the people on the train that day, it seemed the only one who was meant to be there, maybe even destined to be there, was the stranger in the drivers cabin.

“Here we go then” Mitchell put the drivers hat back on and grinned.

More stories from Camilla Cole and writers in Fiction and other communities.