Burning Down the House

Arson or the flames of hell avenge 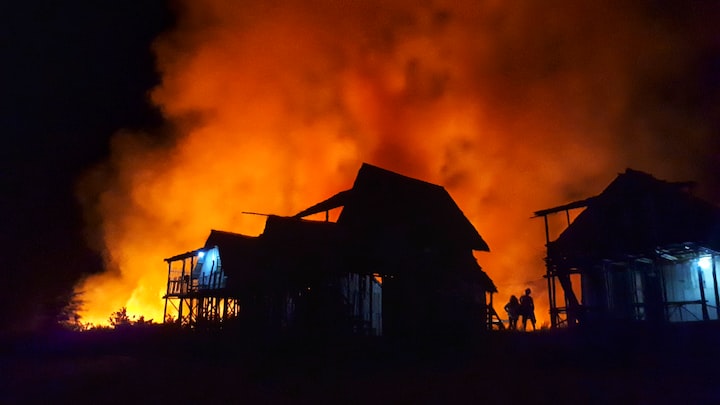 Photo by Thomas Ehling on Unsplash

In the middle of the night, I wake slowly to the whispers of angels. I feel their breathy secrets warm against my cheek. Then the words of angels become a rustling sound like paper and then the crackle of wood burning.

Air gets in my chest hot and thick. I choke. The door flies open. My father grabs me in his arms, carries me beneath a ceiling of smoke through the living room. I see the scared in his eyes. The green sofa, the small table with Mom’s magazines, the ruffled shade of the lamp where she reads all look unfamiliar in the smokey darkness. I bury my face in Dad’s T-shirt.

Outside, he lays me on my back in the neighbors’ yard. The grass is cool and wet with dew and soaks through my pajamas. He crouches beside me, his hand on my bell, looks into my eyes.

I stay on the ground like that, without tears, staring up at stars against a black velvet sky.

One craggy branch of an old elm, visible only from the way it blocks the scattering of stars above it, reaches down to me as though aiming to poke through me, pinning me like the butterflies my brother catches and mounts to cardboard, looking up their names in big books.

Inside, the sofa smolders than bursts into flames. Smoke billows from the heating vents in the floor. Framed pictures of my brother and me wearing school smiles curl behind glass. Fire follows wires buried inside our walls leaving behind thin trails of charcoal. In the kitchen, an electric mixer whirls and sparks, then stops. On my back on the cool night grass, I sense this.

Flames bite through the roof and the night turns a spooky shade of orange. I hear the screech of unfamiliar wheels and a car door slams. She is suddenly beside me, kneeling, palm flatted against my belly saying, Baby? Baby? Are you all right?

In the firelight her diamond ears sparkle. Her red mouth smeared larger than lips moves with words that make no sense to me. Behind her towers a strange man. His shoes are fancy on his feet. He sees that I see and backs away with measured steps until he fades to black and is gone and I am certain of him only by the sound of his car pulling away from the curb.

Sirens shriek. Red lights flash like a flickering halo behind her. Big trucks clatter. Men shout. My father runs on desperate feet, bare and bleeding, across the wet lawn. He sees my mother kneeling in the grass beside me. Their eyes meet. He looks away.

Please, he says to firefighters, our boy.

They follow in stiff coats and boots and helmets. They carry axes. They talk of windows and doors and balconies. Hoses slither through the grass behind them.

Mom keeps her hand on the gap of my pajamas, skin on skin, rubbing my belly, rocking to a rhythm I do not hear. She lifts her face toward the sky and the stars and the moonless night. Makeup streaks black from her eyes. In the quiet between her sobs, I hear the rustling of butterfly wings crumpling in the heat of the house and my brother is gone.

Neighbors come to watch the fighting of fire with water. They wear coats over pajamas. They pull robes tight around their waists. Time turns choppy in the red flashing lights. I see the faces of neighbors. I don’t. Firefighters say, Stand back. Out of the way. They push them toward the street and wrap yellow plastic tape around the trunk of the tree and then a fence post netting my mother and me like fish. Neighbors say my mother’s name to each other. They say nothing to her or me.

Out of the night my father appears again. He carries a blue plaid bedspread, one corner draped over his shoulder, the other falling in folds to his knees. He walks with the weight of it in his arms. Even in the dark, I feel the cool shadow of the two of them passing over me as he walks to the waiting ambulance.

I’m going he says to the air near my mother. Tears streak clean down his smoke blackened face.

He holds tight to the bundle as he climbs through the open doors of the ambulance. A man slides in beside my father. He pulls the doors by their handles. Before they close shut I see my father bury his face in the blankets that cannot smother his cries. The ambulance leaves, unhurried and soundless.

My mother’s head hits my chest and she shrieks squeezing me, the wet of her tears and the dew mixing on me. And still the house burns. Neighbors watch until they are tired or cold or bored then crawl back into beds to finish unsettled dreams or flip on kitchen lights to make coffee and toast to start their ordinary days.

Dawn rises through the matchsticks of our roof. Hoses are wound. Axes put away. Firemen remove helmets to reveal pale foreheads. They shake their heads. Father Connor arrives in black suit and white collar. He parts the yellow tape with a tug and snap. He puts a hand atop my mother’s head still stiff with hairspray, blesses her. She rises slowly as though pulled up by a string and I slide from her arms like warmed butter. Grass stains the pink folds of her party dress. It was a favorite of my father’s.

The priest presents a patchwork quilt made by the ladies of Sacred Heart. He uses words chosen carefully for just such an occasion. My mother stands with arms hanging limp at her sides until her forearms lift palms up to accept the gift blanket.

Father Connor leads mother through the front door of our house. I walk through the wall now mostly missing. The living room carpet squishes beneath my feet. The sofa sags with the weight of water. The smell of burnt hair and ash hangs in the air. Mom holds the patchwork quilt to her breast and keeps her head bowed as if in prayer. My brother’s room is smoked and wet. The walls are axed open. Plaid wallpaper peels from the plaster. His bed is in splinters. The mattress is split and spilling stuffing on the floor. Model airplanes melted and then hardened into twists sit on the shelf with a shattered shadowbox of butterflies now wingless.

Father Connor stops and stares. Mother stops. On what remains of one wall hangs a metal crucifix. It was my brother’s Confirmation gift. The brass cross is tarnished. The thinner metal figure of Christ is charred black but whole, fragile fists still clenched in pain from the nails driven by our sins. My mother reaches out to touch the body of Christ. It crumbles to ash and scatters in the wind blowing through the bones of my home.

My mother gasps for breath with a sound like a soul leaking out. The priest raises his hand and she drops to her knees. In the name of the Father, Son and Holy Spirit the priest begins. Mother touches her ash covered fingertips to her forehead. She touches her heart, her left shoulder, her right and the holy gesture leaves a dark stain like a sin across the pink of her dress.

More stories from Vivian R McInerny and writers in Fiction and other communities.