by Carrie Roberts 3 months ago in Fantasy
Report Story 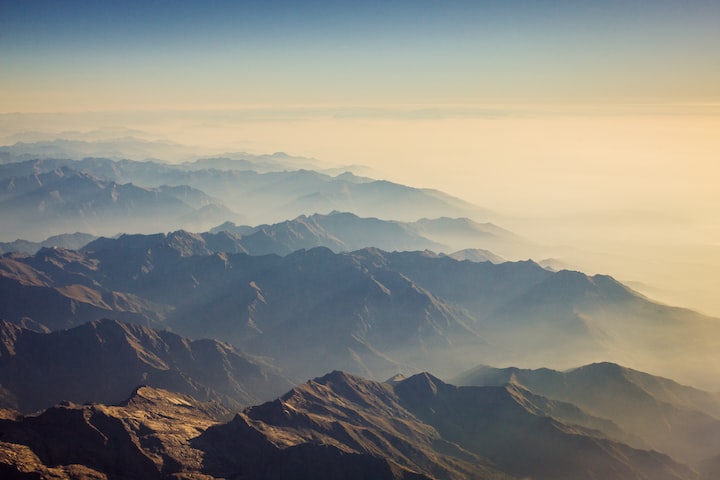 Photo by Konstantin Kleine on Unsplash

Aelwen stands on the precipice overlooking the cliffs and mountains of her home. She closes her eyes and breathes deeply as a soft breeze caresses her long, dark hair. With a soft sigh, she spreads her arms and leaps.

“Do come in,” said a voice from the back of the cottage, “There’s no need to be shy.” Warily, Aelwen stepped further into the shadowy room and out of the blinding afternoon sun. They’re always the same, she thought as her eyes adjusted and she took in the cluttered room around her. There were the usual dried herbs and flowers hanging sporadically about the low rafters, a small fire crackled under a dark metal cauldron, and various sigils and runes marked the drab walls and doorways. Of course, each of the many huts she had visited over the last years had its own unique touches- a collection of crow skulls or maybe a crystal ball- but they were all simply variations on a basic theme. Unfortunately, their similarities also extended to their inability to help her.

Aelwen’s musings were interrupted as a tall, slim young man emerged from a door in the back of the cottage.

“Welcome! What is it you seek?” he gestured gracefully to a table against the wall, flanked by two chairs. Aelwen hesitantly took the nearer of the two chairs, and he eased into the other as she began to speak.

“I need you to break a curse.” Aelwen paused to study his features for any hint of the doubt she sometimes encountered. Instead, she saw only intrigue as he waited for her to continue.

“Someone close to me has been shifted from their natural form by a powerful spell, and I have spent these past years seeking a way to restore her to herself.”

“What you ask is certainly difficult,”

Aelwen held up a hand to stop the man.

“Save your breath. I know how difficult it is. I have met every charlatan and thief across the land and I have tried every spell and potion the few honest sages could offer. However, I have heard much of you and your abilities. Tell me honestly, can you do this or should I seek my answer elsewhere?”

“I can, but I will need to know more before I can begin.” He stood to retrieve a quill and paper before continuing, “Tell me all you can about this curse.”

Though Aelwen still harbored doubts, she began softly, “It was many years ago. A young dragon could not resist the rumors of a rare golden urn hidden away in a distant land. After many false leads and much wasted effort, she finally found the cave that housed the object of her desire. As her talons closed gingerly around her prize, she was struck with unimaginable pain. When the waves of agony passed, she found herself facing a powerful sorceress who explained the dragon’s folly. The urn, you see, contained the ashes of the beloved daughter of the sorceress, killed by a dragon out of greed, and was cursed to alter all dragons who dared seek it out.”

“And you’ve been human ever since.” It was more of a statement than a question, but Aelwen nodded in answer. He set his mouth into a thin line before standing to examine various jars and plants about the room.

“I can help you, but I will need time to prepare. Return in a fortnight.”

“And the price?” she asked coldly. There was always a price, and it was rarely a fair one. The man paused and appeared to consider for a moment before replying.

“I require a few drops of your blood for the cure. When I collect them, I will extract a small amount for myself for future use as well.”

Aelwen was skeptical of such a simple price, but she was also desperate. Her body ached in its human form and she longed to once again feel the wind under her wings, so she reluctantly agreed.

The time passed agonizingly slowly, but at last Aelwen found herself back in the small cottage, waiting for the mysterious ritual that might finally give her freedom. The man led her to the back room of the cottage and motioned for her to sit on a low cot in the middle of the room.

“You’ll need to lie down. In order to reverse the curse, I must extract your blood in a very specific manner. You must be bound with these,” he passed a thin strip of rough material to Aelwen, “and once I begin you will not be able to speak. Do you have any questions?”

Aelwen frowned, turning the strip over in her hands to examine it. Though she disliked being immobilized and silenced by a stranger, the strips were thin enough she could break them if the need arose, and he was her last hope; what choice did she truly have?

“Very well. What happens next, once you have the blood you need?” she asked, positioning herself on the cot.

“There are many steps, and I will explain each as it approaches. For now, relax and rest assured you will be your true self in a matter of hours. Are you ready to begin?”

Aelwen nodded and the man tied each of her limbs to the cot, whispering under his breath as he did so. When the final knot was tied, the bonds suddenly tightened all at once, becoming almost uncomfortable. The man produced a fine, thin blade from beneath his dark cloak and knelt beside the cot. Holding an ornate bowl beneath Aelwen’s wrist, he raised the dagger and sliced deeply into her flesh. Aelwen attempted to cry out, but she was mute as he had promised. She watched with growing alarm as the bowl slowly filled with more than the few drops he had said would be needed. When he showed no sign of staunching the flow, she began to struggle against her restraints. To her dismay, she found them stronger than before, made unbreakable by his mumbled words. He let her struggle in vain until she became too weak before he finally spoke softly,

“Do you not know what your blood is worth to someone like me? You may be human, but the blood of dragons still flows hot in your veins, hot and powerful.”

Aelwen’s vision began to blur as she fought to stay conscious. He waved his free hand near her forehead and whispered once again, and, for her, the world went black.

Everything ached and the world seemed to spin wildly as Aelwen struggled to open her eyes. As her dizziness subsided, she was at last able to squint into the warm morning sun. Taking a deep breath, she pulled herself into a seated position. The man it seemed, had taken some pity on her and spared her life, though only just, leaving her to wake somewhere in the forest. She fought back tears. She had been taken in by yet another charlatan, interested only in the price he could extract form her. She was done trying; it was finally time to return home.

A faint trickle of blood ran from the corner of Aelwen’s mouth as the dragons landed at the base of the cliff next to her. As they surrounded her broken body, a small red dragon raised its head and let out a long, low roar. One by one, the dragons sang their grief, and their keening thundered through the canyons as they mourned the last flight of their lost kin, forever trapped in her human form.

More stories from Carrie Roberts and writers in Fiction and other communities.