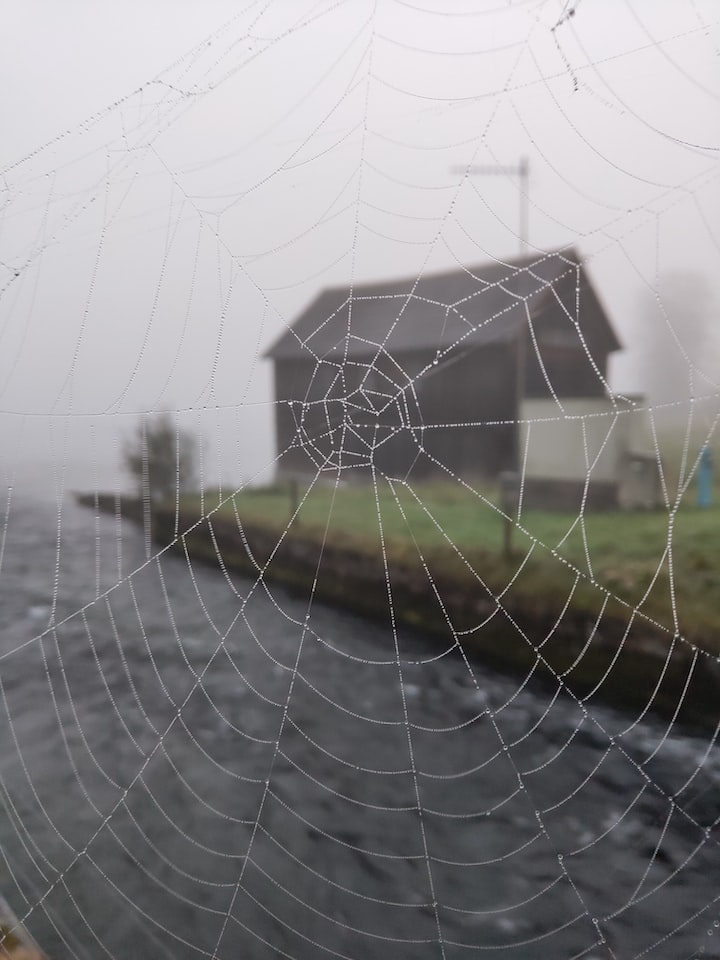 Photo by Maxim Berg on Unsplash

The house and barn were hidden from view, camouflaged by overgrown shrubs and trees. It wasn’t until they turned onto the drive itself that Maura Hartson caught a glimpse of the prim white house and the old cowshed beside it. Two cruisers were parked in front of the house, strobes on, painting the clapboards a lazy blue and red. The coroner’s van was parked sideways in the drive; Maura stopped behind it. A uniformed officer made his way toward her. She studied his approach. Hurried, harried, intense. She opened the door, climbed out.

Instantly, the heat wrapped her in a humid embrace. She left her jacket on the seat. The car door made a soft chinking noise when she shut it.

“Detective Hartson?” the uniformed asked. Maura nodded, held out her hand. His grasp was sweaty.

“Chief Carter, Hogsfoot Hollow PD,” he said by way of introduction. “Thanks for coming out to assist.” His throat worked as he swallowed. “This is… bad.”

Maura raised her eyebrows and he answered her unasked question. “We’ve had murders in the Hollow before, but nothing like this. This - this is - beyond brutal.”

“Can you tell me what happened? Who found the body?”

“Girl called it in. She’s here visiting her grandmother, Harriet Winters. Harriet’s the victim. The girl, Jessie Winters, called 911 and said her grandmother had been bitten by a black fly.”

“She keeps saying it over and over. A black fly bit her gran.”

Chief Carter gestured toward the house. “She’s in the front room. Do you want to see her first, or the victim?”

Her first impression of Jessie Winters was “imp.” The girl looked to be about eighteen. Slender build, long red hair, freckles (“sun kisses,” Maura’s mom had called them) scattered over her nose and cheeks. She was pale, and despite the oppressive heat, she was wrapped in an old-fashioned quilt, the kind sold by Amish women in Pennsylvania. The girl didn’t look up when Maura entered, intent on picking at a thread in the colorful throw. There were two other officers in the house. Maura acknowledged them with a nod and then knelt on the floor in front of the girl. Still, Jessie didn’t look up. Maura gently touched her knee.

“Jessie, my name is Maura. Chief Carter asked me to come help sort out what happened. Can you fill me in?”

Jessie's head jerked up and Maura felt almost physically struck by the girl’s expression. Shock was imprinted in her blue eyes, in the slack mouth, but there was something else there, too, and it took a moment for Maura to name it: terror. “I think it was a black fly. That’s what Gran kept saying. She got bit.” A tear trickled down the girl’s cheek.

“Can you back up a little?” Maura asked gently. “What were you doing before that?”

“We picked strawberries this morning to make jam. Gran went to the barn to get the mason jars and I heard her scream. I went running to see what was wrong and she said she got bit by a black fly and it hurt like the devil. She tried to pretend it wasn’t sore, but I could tell she was just faking. We started to make the jam and then she said she had to lie down for a bit. She went to her room but I could hear her moaning through the door. And then she was quiet. I think maybe I fell asleep, too. After a while, I went to check on her and she wasn’t in her room. She wasn’t anywhere in the house so I went out to the barn and I saw… I saw…” The girl started to sob. Maura touched her knee again.

“That’s okay, Jessie. Was anyone else here?”

“Did anyone drop by? Come for a visit?”

The girl shook her head.

“Anything else you can tell me?”

Maura stood up and surveyed the house. From her vantage point in the living room, she could see a sliver of the kitchen. Maura walked to the swinging door, pushed it open to see the kitchen in its entirety. A bowl of strawberries was on the speckled counter. Next to the fruit was a colander, a large black pot was on the stove. On the table were spices, sugar, butter.

She let the door swing closed. She motioned to Chief Carter. “Barn,” she said. He nodded, his Adam’s apple bobbing as he swallowed.

Their shadows spread out like spilled ink as they walked across the dry grass to the barn. The double doors leading to the interior were closed; officers stood guard on either side. Maura noted that they both looked ill. Confirmation came seconds later when she spotted the pile of vomit on the grass. She skirted it without saying a word and motioned for the officers to pull open the doors.

The exterior of the barn matched the house. Well-cared for, meticulous. The siding was painted red (was that a rule? Maura wondered. Was it written somewhere that all barns had to be brick red?) the grass freshly mowed, the gravel leading to the doors raked out and neat. She took a deep breath and stepped inside.

The smell hit her at once. Copper pennies tainted thick and gelatinous. Behind her, Chief Carter gagged. She let her eyes adjust to the gloom inside the space. To the left and right, horse stalls stood empty. Hay bales lined the back of the barn. A shelf ran down the right side, loaded with tools, looped coils of rope, handyman debris. A flash went off and Maura saw the crime scene technicians at the far end of the barn. Another flash as a second picture was taken. Maura looked up and something caught her eye. A glistening. She stared and it came into focus. A spider web, shimmering in the dust and heat. Her eyes followed the gleaming strands. The web covered the entire width of the barn. Busy bugger, Maura thought.

“Fellas,” Chief Carter said, and, as if one, the men gathered at the barn’s edge turned. “Detective Maura Hartson from the State Police.”

She acknowledged their greetings as she walked to where they stood. She was relieved to see the ME was someone she had worked with before. Dr. States was good, thorough, not prone to spout theories. He was as fact-driven as she was. He greeted her warmly and as she shook his hand she asked, “So what do you think, Barry?”

Barry States rubbed a hand over his face. “Too early to say.”

She almost smiled. She could have predicted that answer. “What about your prelim?”

Without replying, Barry moved aside and she saw the body for the first time. She couldn’t stop the exclamation that flew from her lips. She stared, horrified. There wasn’t much left of Harriet Winters. Blood splattered the walls of the stall where she lay, formed thick pools around her severed limbs. Her abdomen was … Maura looked for a word, couldn’t find it. Exploded was close as she could come.

“Wounds are not consistent with a sharp instrument,” Barry was saying. “There are no obvious bullet wounds.”

“So she wasn’t shot or stabbed,” Maura murmured. “What the hell happened to her?”

Barry States shook his head and Maura could see the older man was shaken. “I don’t have a clue. I’ve never come across anything like this before.”

“The woman’s granddaughter keeps saying she was bitten by a black fly.”

Barry States gave a bark of laughter. “Are you seriously asking me if a fly did that? C’mon Maura. Even if a fly could do that kind of damage, it isn't possible. Black fly season is May. This is October.”

“What could do that kind of damage?” Maura asked.

Barry shook his head. Maura’s imagination went into overdrive. A firework, maybe? She voiced it and Barry frowned. “I can see where you could think that, but there are no contact burns. If she was hit with a lit firework, we’d see burns and smell the black powder. I’ll know more when I get her into the morgue.”

Maura nodded and stepped aside so they could continue their work. After watching them for a few minutes, she went back to the house. Jessie was rocking and making a sound that wasn't quite a wail, it was more of a keening. Maura knelt in front of her again. “Jessie,” she said softly, “Did anything else happen? Did you and your Gran have a fight, maybe?”

The girl looked at Maura in dull surprise. “A fight? Me and Gran? No. Why would we fight?”

Maura shrugged her shoulders, “Oh, I don’t know. I used to fight with my grandmother about silly things. A boy I was dating, the color of my nail polish, my jeans… we just argued sometime, is all. Did you argue with your Gran?”

Jessie shook her head. “Never. My gran is the best.”

“We’re trying to figure out how she got hurt so bad.”

Jessie started to cry. She scratched her collarbone under the blanket. “I’m scared,” she said.

But Jessie didn’t answer. Just kept scratching and moaning. Maura went to touch her arm, and Jessie jerked away. The quilt fell from her shoulders. Maura couldn’t help it; she lurched backward, away from the sight. A lump the size of a man’s head was on the girl’s shoulder. It was red and oozing green pus. As Maura stared at it in horror she saw that it was moving, undulating. Whatever was in there was rolling under the child’s skin.

“Jesus Christ! Someone call an ambulance!” Maura cried. Jessie groaned and pulled the cover back up over her shoulder, hiding the hideous, heaving, mass.

Just as the EMT’s were wheeling Jessie away, Maura felt something on her arm. She brushed it aside without thinking and a second later, felt it crawling over her skin again. She looked down and at first thought it was a fly. It wasn’t until it bit her that she realized what it was. A spider. She uttered an oath of disgust and brushed it onto the floor. Before she could step on it, it scurried away, under the couch.

“I got bit,” the child said faintly. "Gran said it was a fly, but I think it was a spider."

Maura went cold. She crossed the floor on legs that felt numb and distant and told herself that everything was okay. Everything was fine.

It was just a spider bite.

I started my career as a journalist and later moved into marketing. My work has won several national awards. I've been writing fiction since I was old enough to hold a pencil.

More stories from Patricia Thorpe and writers in Fiction and other communities.