Beware the Trees, They Move! 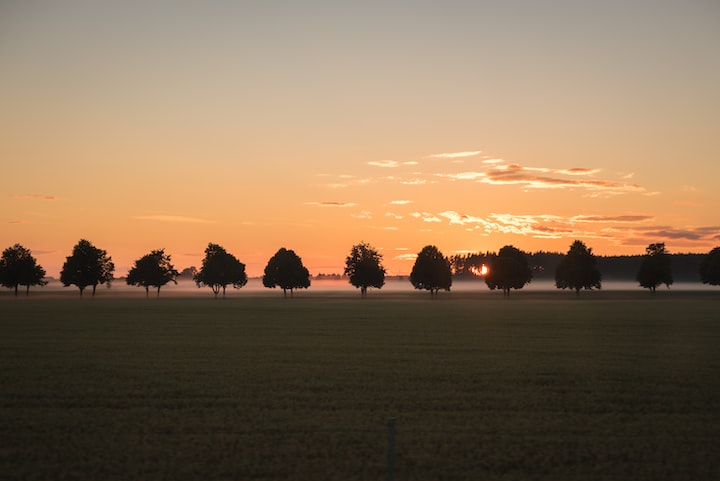 Photo by Niels Weiss on Unsplash

Looking back, it feels odd that such a terrible event happened on such a beautiful day. The sun was shining brightly across a brilliant blue sky. There wasn’t a cloud to be found. The pool water was so clear and clean, it was practically begging you for a refreshing swim. It was high contrast to the murky green pond, a mere fifty yards away. It was early in the day, around 9:30. The heat was just starting to crank up, and the ground was still soggy from the sprinklers predawn rinse.

I dove into the pool, and swam around the deep end for a few minutes. I just wanted to cool off. Then, I climbed up the aluminum latter and crashed on the long longe chair off to the side. It had been meeting after meeting, for the past two weeks, and I was exhausted. I had my sunglasses on and I was admiring the beautiful view surrounding me. Across the pool, there was a metal gate that wrapped around the pool deck, and there were two doors that lead outside. A freshly trimmed slab of green grass stretched out passed the gate. The yard ended with an abrupt large stone masonry wall with several pear trees potted neatly inside. They were starting to bare fruit, and I could see the small unripe pears from where I was sitting. The neighbor’s yard was raised on the other side of the stone wall. The house was perpendicular to the pool, with the front facing the street. I could see the side and the back patio area of the house, and the backyard sloped down to the pond.

I set an alarm on my phone and was about to close my eyes, that’s when I saw Mrs. Fairfax coming through the gate. She sat down at a four-top table that was to my right. She looked tired too, so I decided not to brother her with ‘hello’. I saw her prop up her legs in a chair, pull a small throw blanket over herself, and lean back in her chair. I assumed she was going to nap in the sunshine, as well.

Suddenly, she sat up in her chair, and starred across the pool into the neighbor’s yard. I wasn’t sure what had caught her attention. She seem mesmerized by something. She was starring and she slowly raised up from her chair. She didn’t even catch the blanket, as it fell from her lap. I looked over by the house, the yard, and the trees in the stone wall. There was nothing strange that stood out to me. She walked around the table, closer to the gate, still staring at something. I went to ask her what was wrong, but she motioned for me not to speak. She moved closer to the gate and opened the door. She pulled a small knife from her pocket. Before I knew it, she threw the knife and struck one of the trees. It swayed from the impact. She watched it come to a rest. She never said a word. She looked over to me. Then, she looked over at the only other person at the pool, a teenage girl in a bikini. I believe the girl was the daughter of Mrs. Fairfax’s neighbor, who would occasionally swim in the pool. The girl appeared to be very young, and she was facing away from all the action.

Her behavior was so bizarre, that I couldn’t help but watch Mrs. Fairfax. She seemed satisfied and casually walked over to the tree and pulled out the knife. I watched her inspect the tree for a moment, then she turned away and began walking back toward us. She stopped before she made it to the gate. She paused mid stride and turned back to the trees, almost like she heard something.

Then, the most unbelievable thing happened. The tree next to the one Mrs Fairfax hit with her knife, leaped up from the ground. It uprooted by itself, and twisted its roots into a pair of legs and walked across the yard in direction of the pond. I was dumbfounded, and could only watch as this happened.

Mrs. Fairfax sprang into action, and quickly ran over to the walking tree. She snatched it up, just as it was about to step into the pond. She held it up and began to saw into the middle of the trunk, with her knife. Red liquid began pouring out of the tree, like it was bleeding. She finished saw the tree in half. With one half still in her hand, she walked back toward the pool. Red liquid was still gushing out, and created a trail as she came in. I was still stunned so I didn’t say anything. I watched as Mrs. Fairfax pulled lighter fluid and matches out of a cabinet. She walked back over to the other half lying in the yard, poured lighter fluid over it, struck a match, and set it on fire. She waited until the fire grew in size and the flames were high, before tossing the other half in.

Mrs. Fairfax walked back into the pool area, grabbed a cell phone, and she walked into the house. It happened really fast that I didn’t have time to ask what was happening. I turned to see if the teenage girl had noticed any of the commotion, but she had her head turned away and headphones on.

All I could do was watch, as the tree continued to burn in the yard. Fifteen minutes later, a car with two men inside, pulled up to the curb in front of the neighbor’s house. The men got out and walked down the hill to the smoking branches. The flames had died down, and mostly smoke was billowing up from the smoldering remnants. Mrs. Fairfax came out of the house and walked over to meet the men. They stood over the rumble, talking. Then, the three of them walked over to the car, got inside, and the drove away. I didn’t see her until later that night.

It was close to 11 that same evening, when I saw Miss Fairfax again. I was watching TV in the living room. She came in and told me to turn to the news. I turned it to the local station and we listened to the first news report. The top story mentioned that a man’s body had been recovered. The body had been cut in half and it was badly burned. Authorities had identified the man, as David Sutler. He had been recently released from prison, and was a convicted sex offender. The High Council of Witchcraft would be investigating further. The man was now suspected in recent assaults on teenage girls. After the report, Mrs. Fairfax turned off the TV.

She began to explain what had happen earlier. She told me that the man from the broadcast, was a warlock. The tree was the man’s familiar, and he was using it to stalk the teenage girl. She walked by the trees and didn’t realize until she sat down. There was an additional tree. Nineteen pear trees had been planted, in honor of those executed during the Salem Witch Trials. Nineteen, not Twenty. She didn’t know which tree wasn’t supposed to be there. She assumed that it would be one of the ones close to the end, but she wasn’t sure. The knife she used was silver and would reveal any magic by touch. The man tied his spirt to the tree. When she cut the tree in half, she cut the man in half. When she burned the tree, the man burned. It was important to catch the tree before it’s roots touched the pond. If the tree had touched the water, his spirit would have transferred to the water. He could have crept into the ground water, and then into the pipes of the houses. That was how David Sutler attacked his victims, by sneaking into their homes.

After Mrs. Fairfax explained, I inquired as to why she turned back after retrieving her knife. She told me that she thought she was overreacting, and was going to call her neighbor to see if she was mistaken. She turned back, because she heard the tree laugh as she walked away.

I’ve lived in Lake City, Myrtle Beach, Raleigh, Atlanta, and Arlington. I work in Broadcast News, but I want to be a professional writer.