MD
by Michael Darvall 13 days ago in Short Story 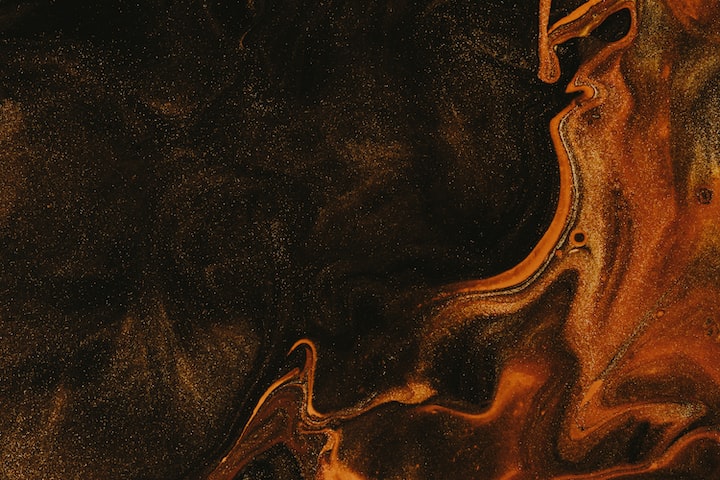 What to do with the body. This was not a problem He’d had to deal with before, but He knew he’d figure it out. He had to, for Her.

He was six and She was seven when they started primary school together, “Big School,” they called it. She was scared about going in, the iron gates and concrete arch seemed huge, threatening. So He made Her a vow, “I will always be there for you, I promise.” Their mothers smiled to each other at the solemnity of the little boy, looking out for his best friend.

That afternoon, when they arrived home, She walked next door to his house, like she had for years, and made him a tea party. He made Her chocolate cake, using the best mud batter he could find. And She told him that she wasn’t scared of school, because He had promised. Warm sunlight filled his chest, and He smiled.

Days ticked by, seasons blended into years. School-yard politics grew vicious, and boys who thought cruelty a manly virtue targeted Him for being quiet and solitary. He learnt how to fight, and how to take a beating. On those days She would walk home holding his hand, to his house. She made real chocolate cake, and He watched her elegant hands cutting it into portions; gentle hands that cleaned the scrapes of that day’s altercation. She’d look at Him and smile, and his chest would fill with sunshine. Then they’d lick the batter from the beaters.

High school came in an onslaught of change. For the first time they would be separated. He would follow his Father, Grandfather, and Great-grandfather to Elleston Boarding School for Boys. She was going to the local state school. He argued with his parents fiercely; why did he have to go to some fussy old school?

“Tradition, pride, and the old school tie. They teach a man the value of his word,” was his father’s response.

“A good education to get a good job,” was his mother’s.

“But I can get a good education at state school.”

“Darling, why do you really want to go there?” his mother arched a knowing eyebrow.

“Yes, I think I do,” his mother smiled, “but you can still see her outside school.”

“But I promised… I promised I’d always be there for her.”

“Back when we started school.”

His father burst out laughing, “That’s not real, it’s an excuse to follow the little tart.”

He stared at his father; the air sucked from his lungs and the edges of his vision dimmed. All he could see was his father’s smirk at the end of a red-tinged tunnel. He snatched up a glass and hurled it at his father, hitting his lip. Then, as his father bellowed, he turned and ran. A twelve year old boy is no match for an angry man.

As the start of the year approached, He dwelt on their parting. She seemed calmer, even chatted about how exciting high school would be; but He could sense her trepidation. The week before school began, he fell ill; within a day he was bed-bound. The doctor was baffled, “I can’t find anything wrong, not physically, perhaps it’s anxiety.”

His mother tried cajoling him better, his father tried bullying. Finally, on the third visit, the doctor asked, “Who’s this girl he keeps mentioning about a promise?” With a guilty wince, his mother said, “The girl next door.”

“Yeah, and she’s no good for the boy, filling his head with damned nonsense. I’ve not let her in the house lately, the pest.”

The doctor peered over steel rimmed glasses, “I think it might be worth getting her to see him, I’m sure it won’t hurt to have her here briefly.”

His mother placed a placating hand on father’s arm, and in a more commanding tone than usual, “The man’s a doctor dear.”

He ignored them while they bickered, until they left. And then soon after, She walked in. Warm sunlight filled His chest, tinged with pain of knowing they’d part soon; He couldn’t keep His promise to Her and icicles pierced him. But She sat on the bed, and held his hand, and told him, “It’s ok, you’re not breaking the promise if something bigger stops you. I know you’ll be there when it counts.” She understood. She always did. And then She did something she’d never done before; She leaned forward and kissed Him, on the lips.

High school was lonely for Him, but he found a new past-time; cricket. Short stature was no obstacle, even an advantage when batting, and with his fast reflexes and hand-eye coordination, he was a natural. He threw himself into it and became his year’s best batter, third in the batting order; first drop they call it, and the toughest position to bat. More than once, he batted right through the order, the other players falling to bouncing fast balls or cunning spin.

Weekly letters from Her were both a salve to his loneliness and painful reminder of their separation. In cricket training He trained to exhaustion to forget the ache of missing Her, but he could not stop himself from pulling out letters to read and re-read at night. Holidays were a brief reprieve, but always held a sense of desperation as they shared their days together, intensely focused on living the moment. The cake batter was sweeter for it, richer, fuller. But ultimately He would return to boarding school, clutching the letters to himself as if to hoard Her presence through them.

Over the years, Her letters changed. She spoke of Laura, then Natalie, with more fondness and frequency, not just the ramblings of “my friends…” but with a tenderness he remembered from Her healing hand in His, when they walked home together. And something more. Red jealousy flared, was She holding their hands like She held His? But it was replaced by concern, would they treat Her as she deserved? On the holidays when he worked up courage to ask, She smiled, and said, “I’m the luckiest woman in the world to have you as my best friend.” And She leaned forward and kissed Him on the lips, and his chest filled up with warm sunlight.

The final years of school passed in the weary blur of frenetic school-work and high-pressure exams. With the same intensity he applied to cricket, he drove himself to achieve academically, and achieve he did. “You could do medicine,” crowed his parents. He chose political science; medicine would have required moving to the city. Instead, He could study at the local university in his hometown. He could see Her again.

She was not continuing with study, not formally. She won an entry level job in a project management firm, Manning and Firth, and would complete on-the-job qualifications. She told him the day she was accepted, her hands trembling with excitement. He beamed at Her as She grinned at Him.

At college He studied hard and enjoyed social life in equal measure. But the girls there failed to interest him. They were pretty enough, smart enough, pleasant enough; but none were Her. He tried a few dalliances, but the girls seemed like shadows, and soon they would drift away, and he barely noticed. On weekends, he would go and visit Her. And they would share chocolate cake in her dingy share-house flat, then lick the batter from the beaters.

Then one day She told Him about Marcus. She’d met him at a work function at Manning and Firth. They’d started seeing each other casually, and last week Marcus asked her out. Her eyes sparkled; Marcus was so tall, and with his dark hair, and blue eyes like pools you could drown in, and his butt…oh man his butt. He smiled, the words not sinking in, it didn’t mean anything did it? It would be like Laura and Natalie, joyful, tender; then over. But it wasn’t.

It seemed overnight She was moving away from Him, spinning into the orbit of another sun. Her calls grew less frequent, and often she would not answer His. She saw him twice in the weeks after she told him of Marcus, then not at all. Six months later she called and asked to come over. She picked up a cake from the shop on the way.

“Marcus and I are getting married.”

His heart stopped, “Married? What do you mean?”

“What does it usually mean doofus? He’s the one.”

“Oh yeah I’m sure. He’s so confident, he always knows what we’re doing. If I can’t make up my mind, he’ll make the decision. And, well, let’s just say he knows how to lick up batter…”

He blushed and looked away, and She laughed a gentle, slightly wicked laugh, “You’ll come to the wedding?”

“Of course. It really counts.”

The wedding… happened. He knew it happened, but all he recalled was seeing Her hemmed in by Marcus and groomsmen at the wedding table, blocked off from the audience, laughing and chatting with her bridesmaids; song-birds in a black tie cage.

He wasn’t surprised she didn’t call from her honeymoon, but two weeks later when he tried her phone it was disconnected. She hadn’t given him a new number. Well She was probably busy, moving in together with Marcus, setting up house. He tried to quell his unease, as the loneliness bit deeper. He threw himself into study.

After another month he was fretting, he slept fitfully, woke often, wondering if she was ok. She’s with her husband – she’ll be fine… but still. He started feeling ill again. He would break into a sweat, or start trembling suddenly. He often woke at night after dreaming he heard Her voice, and then couldn’t get back to sleep. He saw a doctor who prescribed him anti-depressants and six months off study. After a month he threw the drugs in the bin.

Then one day, after six months, She stepped back into His life. He came home one morning, and there She was, sitting at his kitchen table. She looked up and smiled, and he felt the familiar warmth, but lessened, as if a cloud shadowed the sun. She sat hunched, as if to make herself smaller, a shawl pulled over long sleeved clothes. He reached out and touched her arm and she shrank back and gasped slightly. This wasn’t Her, He knew her too well, and this was not Her. And She could see He knew it.

She talked, hesitantly, fearfully. The honeymoon was great, and living with Marcus was wonderful, at first. But then, it seemed she couldn’t do anything right. Nothing. And things got worse. She paused and He gently reached over, held her hand, then carefully pulled up her sleeve. There were bruises, and small, circular burn scars. She turned her head, wouldn’t look him in the eye, and he felt his chest fill with a burning sun.

“You stay here. I’ll be gone a day or so, just stay here and don’t leave ‘til I get back.”

He paused at the hallway cupboard and dug out his cricket bat. Then he went to see Marcus.

He figured out what to do with the body. The desert is vast and lonely, and she keeps many secrets. Now she added one more battered body to her silent store.

The falling night trod his heels as He entered his apartment. She was playing solitaire at the kitchen table.

“Are… are you ok? What happened? Did you see Marcus?”

“No. Couldn’t find him. Friends say he skipped town.”

She burst into tears, torn between relief and despair. He held her, tenderly, tightly. He had made a promise, a promise that He would always be there for Her. And so he would. Always.