with the eyes to see 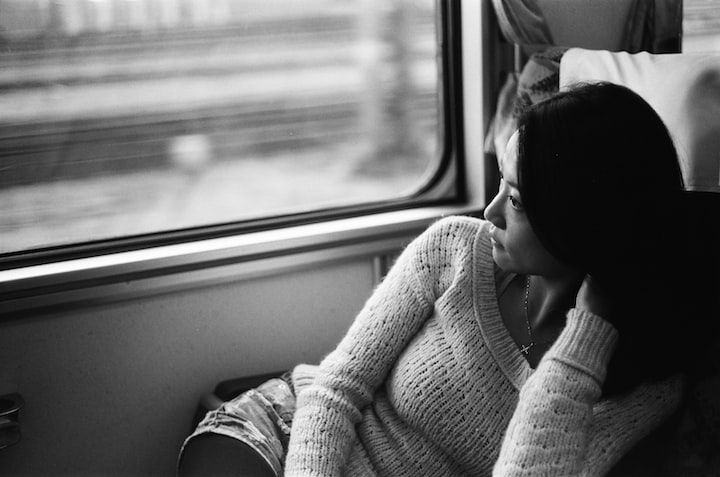 Photo by Carl Cheng on Unsplash

The eyes are gray. I take it they’re mine. They look at me from the window with nothing but black on the other side. Black and speed.

I touch the glass gently and cold like an electric current shivers up my arm through my finger.

I’m not worried. Worry doesn’t move mountains. All it would do is cloud my empty mind.

There’s a nose under the eyes in the window. And a forehead above them. Thick, short hair blends with the darkness behind it, looking like a hole I could lean forward and fall into. Just fall and fall, tumbling in to elsewhere. It doesn’t feel like me. Even with a reflected finger meeting my own. A hand falls on my shoulder.

Leaned my head directly back, I see another face. Upside down and more real than the one in the window. There’s a nose on it too. And eyes. But there’s more in these eyes, more thoughts behind them.

“Ticket?” The mouth on the face moves and the voice that comes from it wishes it were somewhere else. With someone else.

“Ticket?” I repeat back. My voice is higher and mimics his discontentment. A new thing is in his eyes. He is realizing something. He’s in the present now, not thinking about his preferred people.

“Oh. You’re one of those.” He grunts and his upside down body carries his upside down head away. I lift my head back up on look back to the window. I hear his voice asking,

“Ticket?” The longing is back in the word, but he is speaking at another being, one further away that I cannot see, so I ignore him.

“Bloody oracles.” This raspy voice is also full. Full of disdain, but the disdain doesn’t match his words. His disdain is for himself, however he tries to disguise it.

This time, I turn my head. A little to my left, on another bench, is another person. This person has eyes with levels to it. The first level is anger and behind it is an endless and silent rant. The first level is directed at me, crowned by a furrowed brow and framed with dark circles. He was handsome, before he began hurting himself. Lifting a sagging paper cylinder, he takes a long drag and blows the foul-smelling smoke towards me. By ‘oracles,’ I knew he meant me.

“What,” he spits, “makes you think you’re so different than the rest of us?”

“I don’t think.” I don’t bother making my voice full. He coughs hoarsely.

“Ha.” He says. It isn’t real laughter. “Is that what makes you different? Hilarious.”

“In a way.” I read the rant behind his eyes. “These.” I gesture towards my own eyes. “Are for seeing. Those,” I point towards his, “are for holding. If I spent time thinking, I would see less. And I’m for seeing.”

“It’s ridiculous.” He ignores my words and talks to the ceiling. “Every time you bloody sybils make some grand and dramatic prophecy, you’re completely emptied and plague the rest of us by wandering around like a senseless corpse. Just bloody stupid bodies without souls, that’s what you are, just in the way. It’s ridiculous.”

“If you want to kill yourself, there are easier ways.” I say.

He starts. I obviously surprised him in ways he didn’t want to be surprised. The first level of his eyes burns hotter.

“Straight nonsense.” He grunts. His words dismiss mine, but they’re full of belief. Not that I need confirmation.

“You mean your drugs and smoking and various self-inflicted pains to be self destructive, but if you want to destroy yourself, there are faster and less painful ways.” I trace my finger around the reflected face in front of me.

“What do you know?” he snaps. Choking on his one speech, he coughs violently. Out of the corner of my eye, I can see his body heaving and his back shaking.

He sits back up and glances around. No one else is near us. Leaning towards me, he clears his throat.

“I know how your sort works, yeah? Get it? I know how it goes. You don’t remember anything that happens to you, really. Right? Not like other folks. I know how it works.”

“Yes, you can tell me anything in my current state. As I recover, I will not remember it.”

For a moment, he is silent. The gray eyes in the window glance at him with me, watching him fidget with his filthy brown coat.

“I deserve the pain,” he croaks, “I don’t deserve to die easy. Not after…” his rasp fades.

“You hurt, so you think you need more hurt. And then death.”

He nods slowly, glancing around again to make sure no one was listening. I can tell that this is his first time fully admitting it to himself, as well as to me.

“That’s not the only answer.”

“How would you know?” His rasp is softer, the second level of his eyes speaks louder than the first.

“Tragedy can be our fault, or it can be someone else’s, or it can be no one’s. But even if pain deserves death, there’s another answer.”

“What?” The single word is raw, finally fully vulnerable and empty of hostility.

I don't think. But I know. And I know what to say.

“A man once wrote words full of meaning. 'He who learns must suffer.’” I watch as he listens to my voice, carrying the cadence and emotion of the word that I speak. I continue, “‘And even in our sleep, pain which cannot forget falls drop by drop upon the heart and in our own despite, against out will, comes wisdom to us, by the awful grace of God.’”

I look at him and see with my empty eyes, that he needs something. So, I rise and walk to his bench and sit by him. Ignoring the stench of a man who has given up, I lean in and hug him. He doesn’t hug back, but rests his forehead on my shoulder and sobs. The sobs are fuller than any of his words and any of mine, leaking years of pain and guilt and anger, like a stale and still water had finally began to move and freshen.

“The other answer is growth,” I whisper in his ear, “and it is possible.”

We sit like that for a long time, and when he finally pulls back, he is lighter.

“Thanks.” His voice is still hoarse, and not fully changed, but I know that it will.

I get up and walk back to my bench and sit, staring at the window.

He sniffles and rises to his feet, stumbling away.

The eyes are gray. I take it they’re mine. Something in my chest, beneath the skin and bone says something just happened, but I don’t remember. Behind the eyes are nothing but darkness.