by Simi 2 months ago in family

Àbíkú in Yorubaland refers to a child who cycles repeatedly between life and death, usually in a familial sequence. 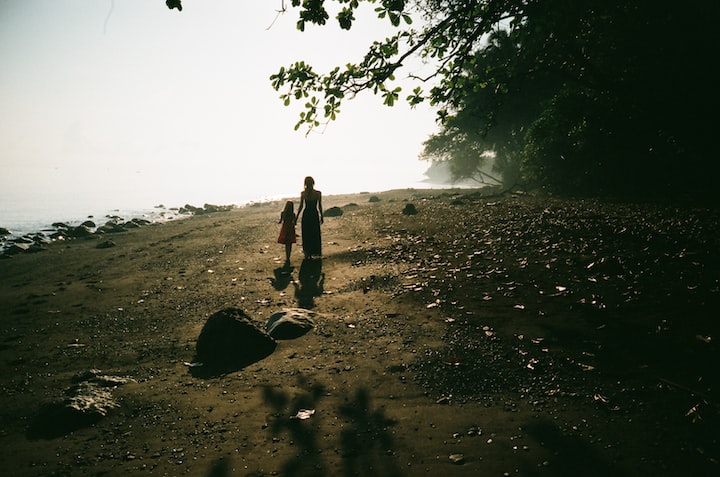 Photo by Anton Luzhkovsky on Unsplash

I was a mother before she was born.

The very few memories of my childhood I maintained are those of me looking at my sister, coated in sweet-smelling shea butter oil and baby powder, being cradled in my mother’s arms as she sang beautifully in her alto voice.

We would gather around our favourite bamboo armchair as my mother sat outside our bungalow at exactly 6 o’clock just before the sunset. She would rock my sister back and forth, back and forth, stopping periodically only to get a whiff of her baby-oil-scented curls. The only thing more beautiful than this sight to a 4-year-old with a potbelly is the beautiful golden ambience the sunset casted on a mother cradling her baby.

“Get off the porch!” she would scream at me—the mischievous older sister with a silly and guilty grin plastered all over my face as I attempted to jump off the 2-feet-high porch my mother always warned me about. But I would never listen. Because of boredom. Because my mother gave all her attention to her precious new baby.

And just like the end of a quick shampoo advert in the middle of a movie, she would resume back to her strangely soothing sorrowful humming, holding my naked sister closely to her chest as she cradled her affectionately in the armchair.

It was almost like my mother knew she had to squeeze a lifetime of affection and joyful embraces into a short period of time, as my sister died shortly after, at 5 months old just when her teeth had started to appear, and she had started to bite into my dolls and laugh in a familiar mischievous tone.

Towards the end of her short and tragic life, little black bumps had started to appear all over her silky olive skin and her beautifully curled pitch-black hair was starting to fall out, leaving red and painful patches. She would cry all night long as we all sat around her hospital bed trying to pacify a baby who could not speak, a baby who could not tell us where it hurts. She had a disease, one which we dared not mention, one that had started to eat her young tender body from the inside. We later buried her with the scars the sickness had left, scattered all over what used to be her joyful and beautiful face.

I witnessed my mother become a shadow of herself. Her collar bones became more noticeable as weeks went by, and she refused to come out of the dusty dark room she had locked herself in. Her melancholic and haunting hum filled the whole house with sorrow for months and her sore and tender nipples wouldn’t stop gushing with milk.

My mother is one with full hips and large bosoms, and she usually let them free — she didn’t believe in brassieres and the sorts, so they would swing about dancing to their own tune as she walked majestically around the house ordering the young kids about. And so when the tragedy hit, she would walk briskly into town like a mad woman with wet patches on her milk-stained unbuttoned blouse, complete with a haggard countenance and scruffy hair.

“I am going to pick up some napkins,” she would say. “I have run out of napkins!”

But instead, she would go to my grandmother’s old empty barn, cursing at the emptiness and asking faceless spirits why her daughter was yanked suddenly from her. Sometimes she would stay there for hours, blending into the darkness before we convinced her to come home because we the other kids, needed our mother. We the other kids, had started to feel the sharp painful stabs of neglect.

But we never got her back. Her spirit died with my sister. And as I grew older I started to realise my mother was addicted to the sadness the death of my sister brought. Either that or she was irreversibly broken, and she couldn’t find her way back home.

And so when I laid on my back at 19 for the man I loved with every inch of my soul, and our eyes locked as we joined hips together in what seemed like a world only we existed in, all I could think about was if 9 months from then on, I would be cradling a baby of my own and humming melancholic songs at sunset. And maybe she might live, or maybe she might die young.

We were in my grandmother’s barn on this day, somewhere my mother wouldn’t dare visit anymore as it had become a symbol of grief and unanswered questions. I could hear the gentle tapping of the rain on the roof and the ceiling creaks, but I had dismissed it as an overzealous rat looking for its next meal. But it must have been the gods listening on this day as I was right, and 9 months later I gave birth to a daughter, who I named Asàkè, which translates to “one who I have picked to care for.”

And I did care for her, as she was the most beautiful creature I had ever set my eyes on. Her smell lingered on in my dreams, and my breasts were overflowing with milk for this precious creature. It was the first time I fully understood my mother’s loss, outside of my own selfish feelings of jealousy and need. I would stay up all night to watch her, and 5 months after she was born, I wouldn’t leave her side, fearing the fate of my sister would befall my family again. She grew very quickly into a sensitive, ambitious, quick-witted and aloof woman, and she’s now at the age where she no longer needs her mother. She’s 18, independent, and rebellious, but I would admit I was hard on her, out of the fear of losing my daughter and eventually losing my mind.

2 years ago she travelled into the city to study a course in psychology. And as a proud mother would do, I supported her and spent nights kneeling on the concrete floor praying for her success. She would later come back last week, looking like a shadow of herself, more distant and more aloof. Of course, she tried to hide it well, but I could tell that behind her inviting smile and her quick comedic responses, there’s something truly wrong with my Asàkè. A mother always knows and I knew my daughter had become a complete shadow of her alluring self.

She refused to speak of her study in the city, and spoke only of disappointment with big bags underneath her eyes, and a strong smell of newport cigarettes. I had noticed she would sneak off, in the dead of the night, similar to the way my mother used to do. Walking off into the distance with no direction like an unhinged woman roaming the dimly lit streets.

At first, I assumed it was a new lover, one she was trying desperately to hide from me, even though I knew it was inevitable that a girl of her age and beauty would soon become the object of a boy’s attention. But she became increasingly distant and had become more and more fidgety, carting away with food whenever she left. After asking many times without any response, I decided it would be time to follow her, and figure out who had the old version of my daughter.

And so I did, walking in slow heavy steps as she sneaked out of the house last night, tailing carefully behind her. Once she took the 4th turn, I began to panic as I recognised the route she was taking. I had walked this route many times as a teenager before I was full and pregnant with her.

She was heading off to my grandmother’s old barn, somewhere I dared not visit anymore, since I now attached the building to the memories of a man who later left me broken. Somewhere my mother dared not visit, since she spent nights in its emptiness asking for answers no one could provide. But my daughter went in, unaware of my presence behind her and she switched on the lights, as I stood peeping through its large window like a petty thief observing his poor victims.

The barn was no longer empty, and was now furnished with a single bamboo armchair, a few cotton bags and a cradle. A man wearing a yellow knitted sweater stood at the corner welcoming her with a kiss. She lowered herself on to the armchair, simultaneously taking off her favourite blouse, revealing her full breasts and her swollen nipples as he carefully handed her a baby wrapped in white.

She is fair, with sprinkles of black scattered all over her angelic face.

The baby’s mouth gave way, suckling on her mother’s eager nipples as Asàké hummed away with a look of relief on her tired face. I stood there, with a strange mix of emotions and unable to speak or move.

My daughter now has a daughter, she’ll be 5 months old tomorrow, and I wonder if she will stay this time.

Receive stories by Simi in your feed
Simi
Read next: The Bull