A Thief Upon the Lake

A Tale of CedarWood 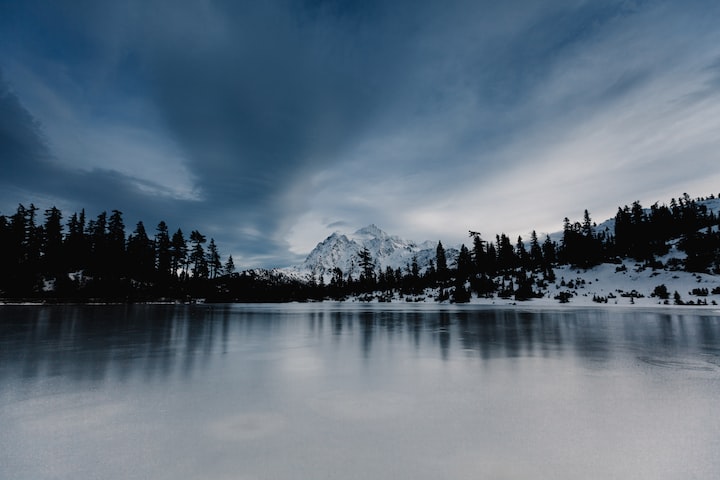 Derah swung his fist high above his head and brought it down onto the frozen surface of the lake with every ounce of strength he had left. His drive relentless. His hope unwavering. He had to break through. He just had to. He was her only hope.

A crimson mark left behind on the thick white sheet of ice, his frostbitten skin cracked from the cold. Yet, even that did not stop him. If anything, it only pushed him harder.

He’d done the impossible and traveled across the entire Realm to reach the mythical Ouyoun Lake. Now that he was here, he couldn’t give up, he had to breakthrough and find it: the last remnant of a time long ago.

It was the night that he celebrated one year past his first decade when his father had told him the story. It followed the quest of a brave warrior who journeyed across the Realm in search of a cure to save his beloved. She’d fallen ill and no matter who he asked for aid, none could understand what had taken her. Determined to save her, the warrior traveled to the edge of the Realm, to the Black Peak. Rumors had spread about a powerful magic that came from the waters of the lake there, a lake by the name of Ouyoun.

Derah continued with all his might. “Break, curse you. Break!”

His hand now all covered in crimson, Derah burst into heart broken tears. With every punch, a piece of whatever hope he had of saving her faded.

Much like the brave warrior’s beloved, Derah’s mother had fallen ill and try as they did to save her no cure worked. Witnessing his wife slowly succumb to death had broken his father’s heart. As the days passed, Derah knew that losing his mother was inevitable.

Yet on one fateful evening, as Derah walked towards his room, he heard a soft whisper. “Ouyoun,” it said. Within moments, Derah recalled the story his father had told him and knew what he must do. He snuck out of the house in the dead of night taking whatever he could careful not to make too much noise, and left.

The journey was treacherous, and cost Derah most of the resources he brought along with him. All he had left were two final bites of his mother’s bread, and what would amount to a sip of water.

He brought down his fist harder and faster now, using every ounce of his rage to fuel him. Interlocking his fingers together, he raised both his hands above head, closed his eyes, and breathed.

“If you are out there, Wills of the Ancients, lend me your strength and your power of will,” he spoke his intention. With a mighty yell, Derah brought down his hands like a mighty hammer.

He looked down and saw the ice fragment. Taking his chance, he raised his hands one more time and swiftly brought them down, shattering the ice beneath him.

Derah reached for his satchel and grabbed an empty clay vile. He lowered it into the space between the broken ice and filled it to the top. He sealed it and placed it back into his satchel.

“Thief,” it said with a chilling whisper.

Derah shot up onto his feet. His eyes darted in every direction.

“Thief,” it said again, as the sheet of thick ice began to crack sending icy dust into the air.

Derah dashed towards the edge of the lake, mustering whatever strength he had left to get himself to safe ground.

“Thief!” it shrieked this time with a high pitched whisper.

The ice below him shook as the entire lake began to devour the frozen ground above it. A few more steps, Derah encouraged himself. I can do this!

Closing his eyes, he sped up and leapt as far as could, landing safely with a thud.

He took a few moments before he opened his eyes and turned around.

It was as though the lake was alive. Shaking. Breaking. Devouring.

He let out a laugh. Accompanying it, was a single tear. He let out a sigh of relief, turned away from the lake, and walked back towards the path that lead him here.

He knew not if whatever he’d done would ever come back to haunt him. The voice had vanished, along with the sheet of ice that covered the lake. He cared not. He’d completed his quest. His pride, now, unshakable.

A smile gleamed on his face.

More stories from Alan Mehanna and writers in Fiction and other communities.