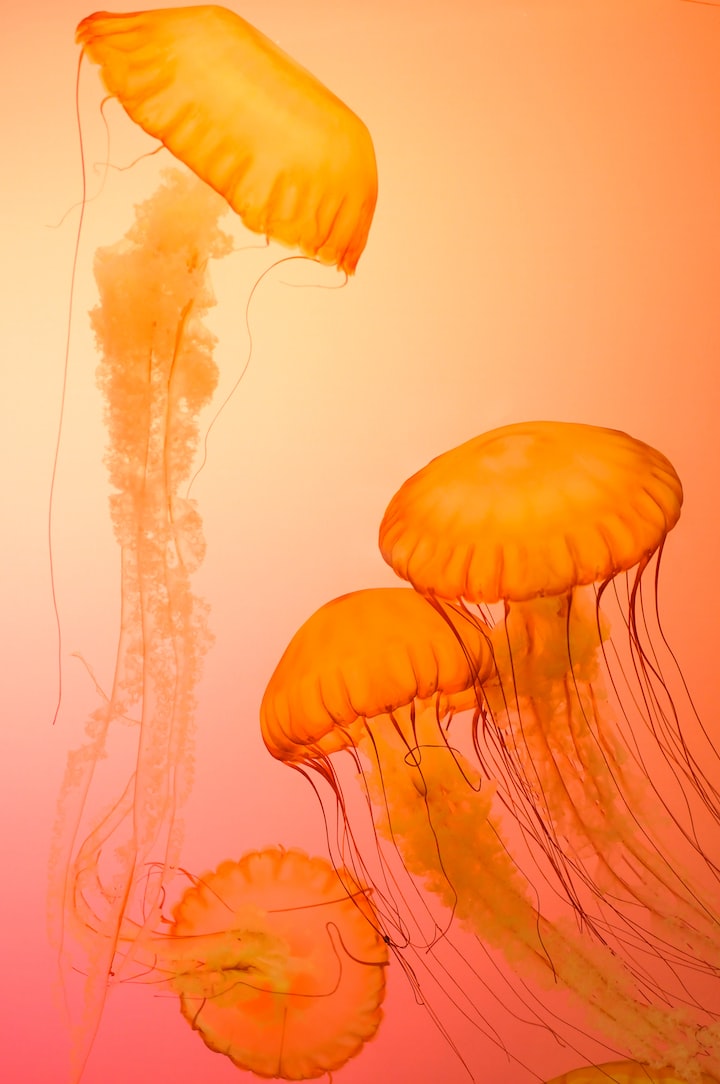 "You're gay?" Nova leaped up from her seat to close in our difference in eye level. "Why didn't you tell us that five years ago?"

I chuckled under an expecting sigh. "I didn't know five years ago."

"No. I didn't mean--," she trailed off apologetically, but it didn't bother me. Not necessarily.

The attention felt sorta good despite the weird questions, unlike how it felt a second ago. It was full of pressure before and I felt stuck in a tight space, but now I felt free, more than I have in a long time, and it lasted for a good while -- until Jayvee had the courage to raise her hand.

Eyes among the four of us pushed themselves so far out of their sockets that they fell down to the floor.

"Wh-what?" Dela Cruz choked out. It's the first time I've ever seen him truly shocked, and it was certainly a look on him to get used to. I get it though -- he doesn't understand how a subject like this that I didn't think I'd really end up confessing would connect to Jayvee's confession of murder.

"I don't believe you. Say the words. Say it properly," the officer recovered enough to continue on with his interrogation, focusing back entirely on Jayvee like he did when this started. No, he had no idea why or how we ended up here, not in the least, but he was going to roll with it.

It's if he didn't that I'd be offended after having to step up the way I just did.

"It was me. I did it. I'm the one you're looking for. It's over. You caught me," she repeated again, massaging her hands harshly, I was worried it'd go purple in under half a minute.

Dela Cruz wasn't contented with that. He wanted to hear her say it as evidence that she committed murder. Not that she made a sandwich, or did a somersault, or bought new shoes at the mall. He wanted context, to make it as clear as it could possibly be.

"Yes, okay. But what did you do?" He pushed at it again, and I think he prayed that it got on her nerves.

"The reason we're here in the first place. The reason we had to come to the station. It was me."

"Nuh-uh. I want to believe you. I said it was you originally for a reason, but how can it be you if you can't say the words? You can't even say that you killed him, but you can carry out a crime so elaborate and have such a well thought out plan for something so crazy? It doesn't make sense. I understand this has been a rollercoaster for you Miss Payawal, but we can't end it so swiftly."

The entire scenario was joke for him. He had fun with prolonging people's pain, especially when he was so certain that they did something so bad that prison wasn't enough, and in a way that I don't want to admit, I guess that made him good at his job. For his field, he shouldn't feel empathy for criminals, despite the times the pieces of them that are actually human come out and they show emotion -- because technically they broke the law so tragically that their emotions shouldn't matter anymore.

Jayvee forced out a shaky breath. "Yes we can end it swiftly. Please-- don't make me get into it. Just believe me. I know I was wrong. Where's the handcuffs? The punishment? The hatred? The belittlement? Give all of that to me and more if that's what it takes. The guilt is making me tired. I'm exhausted. I need to turn myself in."

"Nope. You're lying. Why are you lying?"

"It's the truth. You have to believe me. You went through all this effort for all this time and you're not going to accept when I confess? You went through so much to get the truth and when the truth comes out you don't grab a hold of it? Why don't you put me where I belong?"

"I requested one thing from you and you can't do it. Why aren't you doing it? Why is it so hard?"

Dela Cruz sat forward in his seat as he anticipated her answer. His head was turned so that when you looked at him from our point of view, the first thing that you saw was his ear. In his hand was a recording device, and it's only now that I realized that everything that Jayvee would say at this second would haunt her forever. It was going to define the person she was. Nobody in this world, when they see her name in the paper will think of her as a human being, but of a murderer who let herself get out of control.

"I did it. I--," the woman paused, trying to catch her breath. She began to sweat down her hairline like she had ran a marathon, and I could tell by simply observing, she had that burn in her throat that you get when you're running for so long, but you finally let yourself stop. Jayvee has never left her seat since we got here, but maybe figuratively, this was her stopping herself from running and that's why she felt that fire.

The officer nodded. "Okay. We're getting somewhere," he smiled at a topic so sick. "Now, can you explain to me how you pulled it off? Where you started and how it ended, tell it all. It's the last thing I'll request from you, Payawal. You understand me?"

Jayvee nodded. I've never seen her so obedient to an order without complaint, and I didn't think that I ever would. It nearly made me want to intervene and set her free after everything I've went through, mostly because of the uneasiness of her aura and everything fleeing from the normal, but here she was weak and quick to give in -- biting her lip so hard it began to bleed.

"I started planning it a year ago," she confessed, speaking quickly. She wanted to get it done as fast as possible. "I could see in him that even though we were in a relationship, he wasn't in love with me. He never was. I don't know why he agreed to date me, but it wasn't out of love. Around that time, I was studying multiple personality and I was working on creating a vaccine that would further the understanding of their innocence and guilt.

"People watch too many movies and they tend to think that every single one of a person with dissociative identity disorder automatically makes you a psycho or a killer, and I hated that, so I thought with this vaccine we could further our knowledge on the disorder by showing that majority of people with it are innocent people and that their blood will remain white. I wanted to donate it to mental facilities so that they could illustrate this more clearly and give those people hope. Did you know there's so many people with this disorder whose own families turned against them because of what they saw on television? It's stupid."

"But my experiment failed. Instead of interchanging between black and white blood according to guilt or innocence, the blood would stay black for a long period of time when a person did something wrong or against the law -- long enough so that the cops could evaluate it to find who they are looking for among suspects, which was not my original intention. There were also a few faults in the vaccine and it couldn't be totally guaranteed to work. I wanted to believe it could still do some good, but the failure adding in with my screwed up love life made me want to end him, and I ended up using the vaccine's side effects to put people off balance to give me the time to shoot.

"There wasn't anything to hold me back. I reserved a room a year in advance, found the symbol of the university's logo online, and pasted it into a document with a message and the Tagalog translation to bring everyone back to the Philippines like normal. In that year, I was hoping that Ryan would give me reason to change my mind, but he didn't. Never did he once show that he was actually in love with me, and that brought me to the very end of the plan. I shot him in plain sight, on a bright sunny day, with four other people besides us present, and yet nobody saw a thing."

Dela Cruz raised his eyebrows. He was unsure how to take it in. Of course, it blew everyone's mind, and it would be concerning if it didn't, but his words completely contradicted that.

"I see," he answered her. "One last question and that'll be the end of it, Miss Payawal. Where is the body of Mister Ryan Javers?"

Jayvee trembled. She put a smirk up on her face, but this one was different. I don't know if anyone could tell that, but from my perspective, it was obvious that she was faking being proud of her mischief. She was ashamed to mention it out loud, like this.

Dela Cruz stood up, pressing a button on the device in his hand to end his recording. I thought he'd be unhappy with that kind of answer, but he was quite the opposite. He was glad he had the information that he did, and he was leaping for this case to be closed.

We could only watch as we watched the born-leader of our group be cuffed with her hands behind her back, crowded by a group of people in uniform who led her off to where she would be for a good portion of her life, if not the rest of it because she wasn't going to plead for her innocence.

"I apologize to the rest of you guys for your unfortunate experience and encounters in the Philippines. I promise this isn't how it usually is. I hope that you will find way for it to be made up to you," the officer bowed slightly to us when Jayvee was no longer in sight. "And Mister Colby Lexoni -- thank you so much for your help today. I mean that."

"No problem, officer. Anything I can do to help," I replied, knowing that he thought everything I did today was for show.

And then we took our separate ways.

For me, that was back to Ryan Javer's body, where I had put him.

Little did he know.

Little did anybody know.