A visit from my father 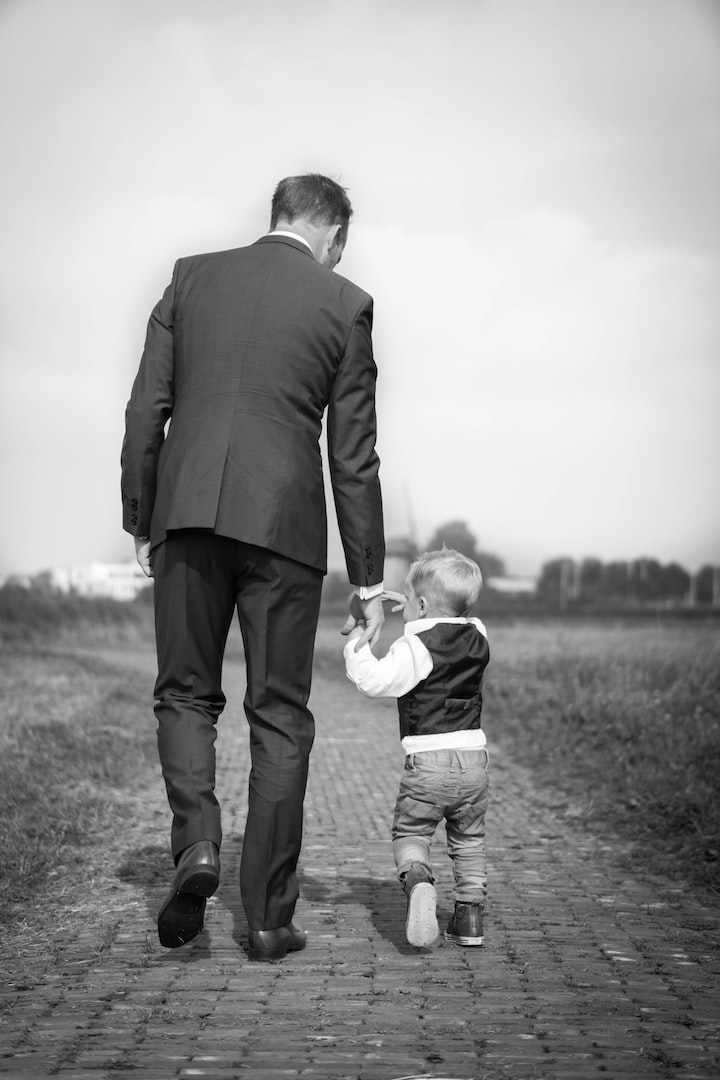 The ten nights which followed the passing of my Dad were black.

There were no dreams, or at least no dreams that I could recall having when I woke each morning. I slept strangely well most nights, but the usual vivid dreams just before waking were absent.

The nights were thick ink.

Then, on the dawn of waking from the tenth night, it happened.

I had a single, powerful dream.

Out of the dense darkness, the dream came upon me rapidly, in full technicolor.

I was standing in front of the entrance to the main building at the Hospital he spent his final moments in. I had done a 90-degree turn and was facing to the left, with the entrance to the dark brick hospital building on my right. In the direction I was looking, across the other side of the pathway on a neat green lawn, a cluster of people mingled in some sort of gathering. Early morning light slanted across the scene.

I instantly spotted my father standing slightly to the left of the small crowd. He looked good, like he had a few years before, not shrunken and yellow as he had in his final weeks. It was surprising, given the circumstances, to see him looking so well. He was dressed in the black suit which he always wore to funerals, with a white shirt and burgundy tie. His black shoes were beautifully polished.

His expression was solemn. As I floated towards the group, he appeared to be looking each person intently in the eye as he shook their hands. I knew that he was saying his final goodbyes to all of us.

As I arrived next to him, he turned towards me.

He reached out to shake my hand with his powerful farmer’s grip. With the other he handed me what I knew to be a gift, a plain brown paper gift bag, capable in real life of perhaps holding a few books.

‘Goodbye, Michael’, he said quietly and steadily. ‘Good luck with everything’.

He then pivoted to the next person. There were a lot of goodbyes to get through, after all.

I looked curiously into the bag to see what it contained, before reaching in and removing the objects one at a time.

There were three things in the bag. It was apparently some sort of Tardis - these objects could not possibly fit into a bag this size.

The first object I removed was a shiny new fence strainer. It was fire engine red in colour.

Images rushed at me, starting from childhood and ending just months ago - Dad crouching next to sagging wires in various fences, cutting the wire with his heavy black pliers, then using his old fence strainer to connect up and tension the wires. I owned 25 acres of land with a badly maintained fence. In death he was trying to help me, or possibly just judging my neglect of the perimeter fence.

The second object was a gleaming white cricket bat.

Cricket had been a central and shared part of our relationship from as early as I could remember. I’d been taught how to play at a very young age, shown aptitude for it, and, like Dad, had been a spin bowler and opening batsman. I’d let it all go somewhere in my mid-twenties. There were better things to do on a Saturday afternoon than stand in hot sun on a cricket field, hoping the captain was enlightened enough to give me a bowl.

Was Dad advising me to take up cricket again while I was still young enough to fully embrace it? Or was my subconscious messing with me while my guard was down?

The final object was a bright, canary yellow bulldozer.

A freshly painted, full size bulldozer does not fit in a gift bag.

But this was a dream.

A bulldozer would be useful on the property, not to knock down trees, but to be able to level bits of land and clear those rubbishy areas of blackberries and the like.

I felt touched. A lot of thought had gone into these gifts.

Then I was awake and gasping, back in real time in my bed a 12-minute drive from the Hospital. It was daylight, watery early morning light slanting through the western red cedar windows into the bedroom.

My eyes were strangely wet. I closed them again and lay perfectly still, reluctant to let the moment pass. I felt visited, something Dad and I had talked about months before when he was making peace with his impending death.

‘Oh, I’ll visit and say hi if I can’, he’d said one day, in a jovial tone that he could not possibly have really felt.

As the days and weeks passed after this dream, I gradually rationalized it for what it probably was – the dream of a grieving son, with some obvious points of connection with his dad symbolized by the three gifts. There was just one other dream in that period, where I saw the top of his head pass the louvred window outside the lounge room of my childhood home. He vanished in that dream before I could call out to him – I felt paralysed.

Life went on, as it inevitably does, and like anyone suffering a loss, I gradually got used to the new reality.

For now, however, lying in bed saturated with fresh images, I just felt grateful for the visit.