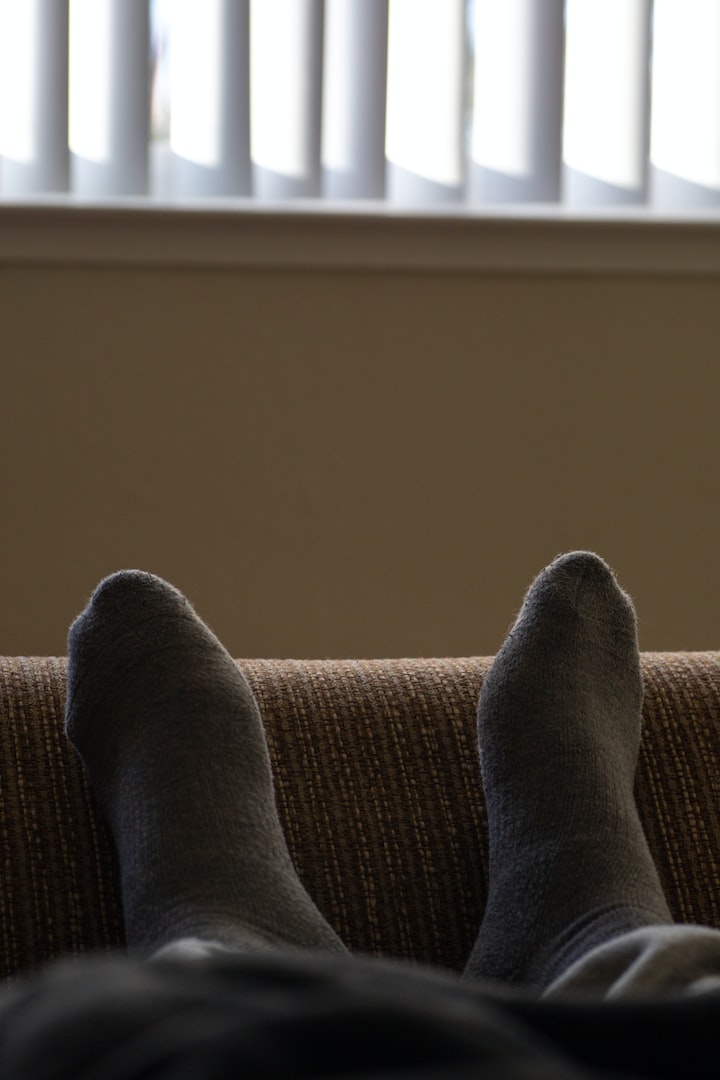 Dear Mom, I stole your socks. It wasn't intentional, I just borrowed them, but I never got the chance to give them back to you. I still have them, despite my many moves since. I keep them in my sock drawer, and I feel guilty even after twenty-seven years.

It was chilly in the hospital; the lack of sleep and my Raynaud's made my hands and feet cold. After my shower, I didn't want to leave you and walk to your house to get a fresh pair out of my suitcase. I borrowed a pair from your locker. They were soft and cozy, off-white with a pattern knitted in. You probably had them for thirty or more years.

Your journey to palliative care shouldn't have happened so early. As usual, you were thinking of others first. You agreed to one final Chemo treatment, so you could be strong enough to help with my son after his tonsillectomy. You hadn't tolerated the previous one well and had decided not to put yourself through another. You changed your mind because you wanted to stick around for us, for your grandchildren. The clinic promised they'd have a room in the hospital where you could be watched while you recovered. They didn't follow through on that promise, you took the train back home alone. God forbid, you should complain to the hospital or ask anyone to stay with you. That wasn't your style.

You were always the caregiver, not the care "taker." Any time one of us needed you, poof, like magic there you were. I remember you arriving at the Via Rail terminal lugging a tuna casserole for dinner, along with your suitcase. Always willing to pitch in and help, especially with your precious grandchildren.

The only time you didn't drop everything and help us out, is when you were carrying for Dad. Waldenstrom Leukemia was a brutal cancer, but you made it as easy as you could for him. You had always been his biggest support but also knew when to give him a stern chat when his lifelong bouts of depression became intense.

After Dad's death and the grieving and adjustment, you resumed your official who needs my help role. We did have some fun trips we managed to squeeze in. Then odd things started happening. You slightly twisted your ankle in the backyard and broke bones. Our trip to Nova Scotia didn't happen because you got a horrible case of shingles. After you recovered you still felt unwell. Pain, muscle weakness, and fatigue were common. Then came the diagnosis. Multi Myeloma! A horribly painful cancer of the blood/bone marrow. Because of your age, transfusions were not possible. Chemo and pain meds were the only options.

You endured it all bravely and still enjoyed family and the grandchildren. It's who you were. You rarely asked for help. One of your friends insisted on taking you shopping with her. She was a bargain hunter who dragged you through three grocery stores to get the best prices. These outings left you exhausted. To avoid them, you would sneak off in a taxi to get your groceries. You told your friend your son drove you. He would have of course, but you didn't ask because you didn't want to "bother" anyone. Such a strong, kindhearted, little spitfire you were.

Your positive giving heart was part of how you prematurely came to palliative care. Your need to be there for us all. The evening you went home after the last chemo treatment, you passed out in the bathroom and hit your head. My brother found you there when he came to check on you. You were rushed to the hospital where you had a small stroke. The family gathered the strategy was discussed, and the decision was made to move you to the palliative wing.

I moved into the unit with my small son, recovering from his tonsillectomy, my thirteen-year-old daughter spent weekends with us. The older grandchildren took turns keeping watch. Your brother did the four in the morning shift. We still joked, we watched Disney movies, and we shared a few bites of your favorite soft foods. We kept it as light and as normal as we could.

One day you asked your friend the Priest if it was okay to give up. He nodded and said, "Yes Evelyn, it's okay to let go!"

Shortly after, while my thirteen-year-old daughter was beside you, you struggled with your breathing, and she called out for me. We saw you take a deep breath in. Just in and never out.

So, why after all this time, do I still feel guilty about a pair of socks? Because unexpectedly you said your feet were cold and there were no more socks in your locker. I had borrowed the only pair of socks and hadn't washed and returned them.

I'm sorry that I stole your socks. And yet, I know you'd laugh about it because that's who you were. Your sense of humor was as huge as your heart.

More stories from Mary Haynes and writers in Families and other communities.