by Pat Miller 2 months ago in humanity

of a beloved curmudgeon 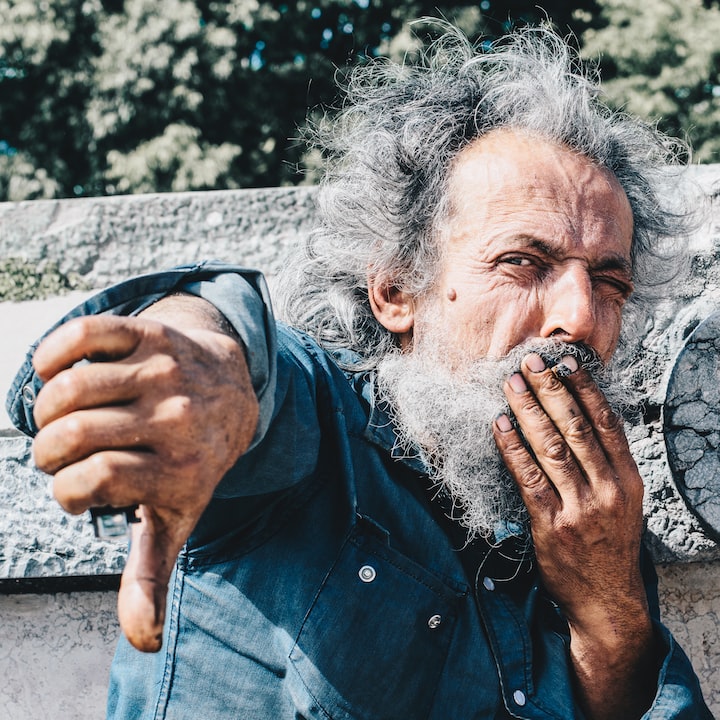 Photo by Daniel Páscoa on Unsplash

He always insisted his last name should be Phillips Coombes-Randall. His rum, rollie and dope habits hadn't been kind to his mental state, overall demeanour or physical appearance. He was a wreck. Round shouldered and dour, grumpy and sour, that was our Warren. The uncontrollable, tangled grey tonsure framed a permanent scowl under eyebrows set in a perpetual, baleful frown.

Warren, never Wazza, lived rough on a property by a beautiful creek, the litter of his existence buttressing his tumbledown caravan, as formidable as any fortress, fitful solar lighting hinting at a nocturnal human presence. He became, after many years, part of local folklore, the not liked, not hated, barely tolerated character in our sleepy village on the outskirts of the known world. Our community is mostly even-handed about borderline mental illness but the local builder's kids thought he was the Cedar Creek Bridge troll.

Everyone assumed he was a writer, this man who would have preposterous names. We never did know his real one. The only thing he seemed to care about was a little black book that accompanied him everywhere. Although clearly precious to him, nobody had ever seen him write in it or even consult it. When asked about it once, drunk on the creek bank with a crowd of locals after a celebration of something or other, he slurred, “This book contains the secrets of Phillips Coombes-Randall.” Halitosis and the impenetrable odour of the unwashed precluded further enlightenment.

He never forgot anything, whether that was a function of that book or some rare clarity in his befuddlement, we never knew. He was a reader, full of esoteric knowledge and rare gems of useless, priceless information. “Five dollars is all you need!” was his favourite line and indeed he would seem to get whatever he wanted for a fiver. Not that he ever had too many of them, relying on everyone else for almost everything else, the pension barely keeping him alive.

In March 2020, the Covid-19 pandemic financially crippled the rural property's owners. They were long suffering, ageing hippies who couldn't bear to see Warren homeless, who put up endless bamboo screens to hide the detritus of an unsocial, terse old man from the nearby, sparsely trafficked road joining Uki village to nowhere. There was no money coming in; Lizzy, the cluey missus, worked on oil rigs off Western Australia. The pandemic quarantine made a mess of her work arrangements. She turned the creek bank site into a boutique camping “experience” for people to join Warren's idyllic, if disorganised existence. No internet. No mobile phones. Passive income.

Everyone thought this wasn't the greatest idea she'd ever had.

It took him a while to twig to the fact that he was the new caretaker. His reaction as predictable as it was ugly. Although not a man with any bent towards violence, he was a formidable opponent. He scowled, swore and redefined passive aggression. Eventually Lizzy won him over with guile, tact, charm and an ultimatum that he couldn't refuse. Aged care facilities on the public dollar are dire places.

Two months rolled by, new communal kitchen, eating space and amenities were built from scratch. Lizzy and her bloke were pretty handy, the setup was pretty basic. 'Rustic' was the preferred term. Warren began to thaw. It was a gradual process, the old boy was actually useful in a peremptory way. He even locked that damned little black book inside the van when he was working.

A few campers arrived, not too many; by the end of the first six months Lizzy was turning a small profit. The rates were great for families and she allowed single parents with kids discounts. That discount had to be a fiver a kid. Warren said.

One family came three times, a week or so at a time in the first five months, a migrant woman with grandchildren, twin boys, about fifteen. Tearaways, just scraping in on the child age limit. The parents weren't coping, there were gambling debts. The twins were chronically truant from school, there was no money for uniforms, books, anything. Lizzy said “Like it or not. It costs you ten grand a kid a year to put them through the public system by the time you get everything they need.” Hafeezah mumbled, “That's what it costs to be a real Australian.” It was easier not to send them.

Warren and Hafeezah, how unlikely it was. She, rotund, short, a refugee with a traumatic past sponsored through the Uki Refugee Project, her quiet determination and ready laugh breaking through the language barrier. He who had never seemed to care for another living soul now was solicitously attentive to her and administering gruff affection to the boys in carefully rationed portions. Mahdi and Kosha, initially rebellious, engaged with Warren in the most unexpected of ways.

He showed them why you shouldn't annoy a snake; Lizzy had to get a very large, angry carpet snake out of the caravan he called home. He taught them lazy stand-up paddle boarding; he was actually quite good at it until he got to the little seasonal cascade where the current quickened. There was a lot of yelling. He showed them how to build a fire; Lizzy, in damage control mode, explained via the local social media chat group that all was just fine in the total fire ban without actually explaining anything.

The ever present book would be absently transferred between pockets. It was a little dog eared, its cover worn and grubby from its life in close proximity to him. The boys knew this was one of his idiosyncrasies, as individual as the awful self-haircut, strands of tobacco stuck to his bottom lip, the permanent scowl and the scaly liver spots on the backs of his calloused hands.

If there was romance we couldn't tell, the layers of complexity confused any easy definition. Hafeezah was as stubborn as Warren while Warren was as wayward as the twins. The twins were confused about the chain smoking, order-giving antihero who was somehow both foiling every fifteen year old's hare-brained scheme and hatching old man plots that involved power tools, wheezy chain smoking (anything) and copious rum. He was strict about the boys not touching the booze. Mahdi stole a bottle of his precious Sailor Jerry's; they drank half not realising it was tea with barely a nip of rum in it. Of course they were busted, Warren had set it up and feigned fury. Hafeezah was mortified and the boys were still not sure what the fuss was about because they didn't feel any effect. Kosha was smart enough to realise they had been played for suckers.

“It was five bucks worth of rum, mates. You got busted for a nip. If you two have a brain cell between you it would be a biological miracle.”

The boys adored him.

After Hafeezah's second visit Warren declared to Lizzy he was going to build a shower onto his (hers, actually) caravan. On Hafeezah's third visit, he presented her with some sheets of corrugated iron, miscellaneous copper pipes, salvaged fittings and infectious enthusiasm. The boys gaped in stunned silence when Warren explained that Hafeezah would basically have the week off and they would be building the shower with him. The holiday project. He fabricated the ludicrous idea that they'd rename themselves Phillips, Coombes and Randall, Building Contractors. And they had to have nicknames, Zag, Zaj and Zaf. Lizzy rolled her eyes a lot, Hafeezah stoically said nothing. It was such a kid thing.

Like everything that was Warren/Zag, it was shambolic disorganisation fused awkwardly with hippy engineering and swearing. Zaj and Zaf, nobody knew which was which, were in spotty teen-boy heaven, wielding power tools and potentially lethal blades utterly unencumbered by caution, protective gear, shirts or footwear. The peals of laughter echoed the screams of tortured power tools doing things they were never meant to do.

It was stupid really, just wheezing – nothing unusual – looking glassily at the boys as they clumsily attached corrugated iron sheeting to the shower frame. Then the fall. He didn't put his hands out because they were grasping that bloody book to his chest, he dropped like he was poleaxed. The boys uneasily thought he was joking until Hafeezah came. After giving him a competent once-over she put him in the coma position and told the boys to get help. She said afterwards you get used to that in Afghanistan.

In the hour it took the ambulance to arrive, Warren died as he pushed the little black book into Hafeezah's shaking hands.

Word travels fast in a small community. The intensity of grieving was made bleaker by its sense of inevitability. God it hurt. How, after the fact, you realise what you've missed. You don't know what you've got 'till it's gone.

We finally found out what was in the little black book - five crisp, clearly unused very well preserved Australian one-dollar bills, carefully interleaved into the 1983 diary's pages, a bit of a let-down really. The only writing in it was 'Happy Birthday Warren, the fiver I owe you, all my love, Michael' scrawled across the week beginning March 13th page and a little heart in the Sunday March 13th space. Nothing else at all.

Hafeezah seemed to know more about him than we ever did. She and Lizzy, cleverly and meticulously, based on an assumed birth date, a couple of old letters and his pension records pieced the dog-eared jigsaw of his life together. It was for the wake and later to tell the boys who Michael was and what HIV meant in the mid eighties. How had we missed all that? Men of his age lived in the closet for life. We didn't know. In fact we didn't know much about him at all. Whether and what we needed to know are entirely different questions.

Hafeezah and the twins are now regular visitors. They help Lizzy and the camping venture is doing well. More importantly the twins are learning what acceptance means, absent in their city lives, before they went to high school.

The weathered hardwood grave marker on the highest point of the property reads “Warren Michael Phillips Coombes-Randall who lived and loved until 2021.” We broke three of his router blades inscribing it. The gayest thing we could find to plant on him was a purple quandong tree and imagined him snarling, “Gee ta,” through gritted teeth and perpetual dope smoke haze, the crinkling eyes giving away just that bit of humour.

It took a while but between us we worked out Warren's obsession with Phillips Coombes-Randall too. It wasn't a who, it was a they, three governors of the Reserve Bank of Australia in the late sixties.

Two of their three signatures were on each one-dollar banknote. One of the notes was worth a dollar, its serial number began with DIK. We understood why that never became a nickname.

The other four were produced in 1968 and 1969, their serial numbers beginning one ZAG, one ZAF and two ZAJs. All those serial numbers ended with an asterisk.

humanity
Pat Miller
Read next: Understanding the Effects of Addiction on the Family
Pat Miller

Raconteur, retiree, roustabout. Sharp observer of the human condition, discoverer of comedy nuggets from the sea of dross.

See all posts by Pat Miller →