by Debora Dyess 8 months ago in immediate family
Report Story

It's usually not a big deal but THIS time... yikes! 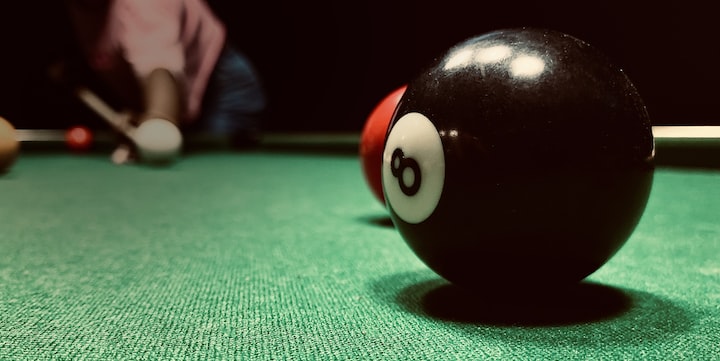 Photo by Alexandre Lion on Unsplash

It was my turn to fetch the drinks from the bar. It fell on me because I’d just lost the lasts round of pool – my last rounds, as it turned out. I watched for a minute before I began to thread my way through the crowd, giving soft encouragement to my new husband as he shot. The 2-ball disappeared, swallowed up by the darkness of the corner pocket. Steve stood and pointed his pool stick at his best friend, who groaned and began to plan his next strategy.

“I got you, Gunlock!” Steve sounded like he was fixing to win the gold at the Olympics instead of bragging rights at the office in the morning.

The men’s expressions switched faces when my sweetie missed his next shot.

"And Gunlock's back in the game!" Joe beamed and used his best 'sports-announcer-voice as he patted my hubby on the back and readied for his turn.

I chuckled and wove my way through others who used the sports bar to blow off steam after a long workday. Dartboard areas, pool tables, ping-pong, and even Foosball tables were all crowded. It took me longer to get to the back of the huge, barn-like building than I anticipated. I stood on my toes as I ordered and then waited for our drinks, trying to see how the game was progressing. No dice. I was too far away.

I heard a shout from our table as I approached, three beers and a mixed drink balanced on the tray I’d been given by the bartender.

My husband had just blown a shot as I left and, because I’d had to wait so long for the drinks, I assumed it was him shooting again when I returned to the group.

A grin floated across my face as I sat the tray down on our table and I meandered over to stand behind him.

I reached out and grabbed a handful of my new husband’s butt as he shot. I laughed aloud when he jerked himself to a standing position and watched the ball he’d been shooting at bounce high against the rim of the table and fly upward.

But that laugh was cut short when Joe yelped and turned to face me. His face glowed beet-red and his eyes seemed to be twice their normal size.

We stared at each other for a few seconds. It took me that long to register my own stupid mistake. I think it took Joe that long to collect what was left of his wits and dignity. Or maybe just have the ability to turn away from me. I saw him trying to smile as he faced the ‘gang’ again, but it was a shallow attempt. His face still blazed, as did my own.

Scanning my friends’ faces, ignoring their guffaws, I searched for Steve. Where in the world was he? And what must he be thinking?

And then I saw him.

He was literally on the floor, laughing so hard his legs had given way to the hilarity of my mistake. His face had been consumed by his laughter, which was coming out in quiet, choked chortles. Tears streaked his face with wet lines and puddled at his beard..

Great, I thought. I’ll never hear the end of this one.

I thanked God, my lucky stars and my Momma’s strict raising that I hadn’t done the crotch-grab I’d considered.

I didn't live this one down for a long, long time. Every time we went to play pool after that, the guys would make a point to let me know loudly, oh so loudly, who was shooting and where Steve and Joe were standing.

And you know I never went for drinks again while a game was going on!

Yep… They were all total jerks! :)

More stories from Debora Dyess and writers in Families and other communities.