I Have Three Dads

by Anna Michaletz 2 months ago in parents
Report Story 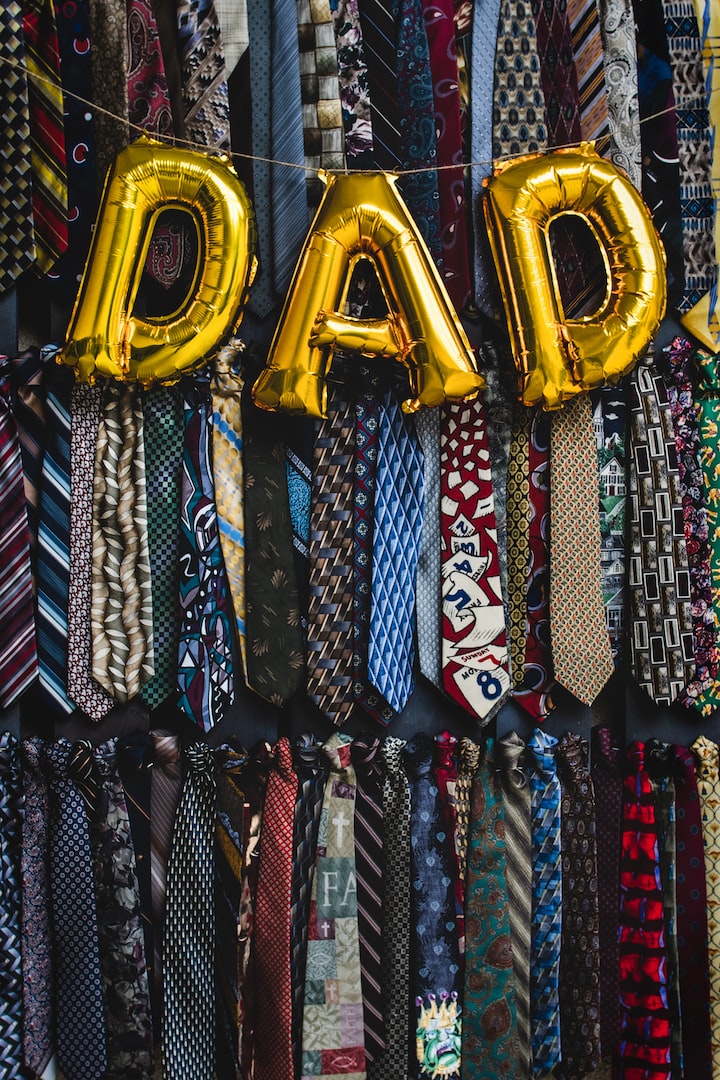 I have three dads. Technically, only one of them is biologically mine, and the other two are both ex-step-dads. My biological father died of liposarcoma when he was 33 years old after an arduous battle for at least 2 years. It's a rare type of cancer, especially in young men. My identical twin sister and I were only 2 years old when this happened, and I can't remember him anymore. I can remember a time when I DID remember him. at four years old, I would hide behind the white leather couch at our old house on Rosetree Lane and cry. I missed his voice and his smell, the last two things that I can recall remembering about him.

Luckily, my mom and my extended family have never let us really forget him. They tell us stories about how funny he was, goofy and always laughing. He used to tote my sister and me around restaurants, one baby carrier in each hand, showing us off to each and every patron. My mom laughs about how stylish he was, and how his favorite color was pink. He would wear obnoxious polo shirts with the collar popped and had an impressive collection of baseball caps.

Mom tells us often how much we look like him. He may have been very tall, and we are short like her, but we share his royal-blue eyes and dark, full eyebrows despite having fair hair. We have his full lips and larger-than-average bridged nose, and even his mildly crooked teeth. My teeth threaten to revert to that orientation every day that I skip wearing my retainer! Recently, I learned that my dad regularly stood up to my grandfather in front of his sisters, both younger and older, to shield them from abuse. I've never heard an ill word against my dad, and I have my mom especially to thank for that.

The person I call "Dad" though, is my first step-dad, affectionately referred to as Mike # 1 by my sister, mom, and me, to keep our ex-step-dads straight. My parents got married when my sister and I were 6 years old, his biological children were 15 and 17. My step-brother, the older of the two, was kind to my sister and me and threatened to beat up anyone who made fun of my brace, wheelchair, or surgery scars, which is a story for another day. My step-sister was very unkind, jealous, and miserable. I like to think that she has changed because our relationship is much better now, but I see nothing of the unbridled sunshine that emits from our father in her.

My dad was my hero for ages. He proved to me that you don't need to be blood-related to have love, to have a bond, to share a family. My dad would carry me (in my wheelchair) to my classroom every day, both morning and afternoon, for months in both 3rd grade and 5th grade when I had a few operations. He stayed up and held my hand when I was scared of my mom after she had had too much to drink. He picked us up from school when my mom was working really late for months to merge her company with another.

I didn't realize this when I was young, but my dad was occasionally racially profiled. He was mostly white, particularly of German descent, but he was also part Cherokee, and he was darker-complected than any white person I had met. I never knew that he was mixed race until my mom complained that he was being profiled again at the airport. I walked up to the security guard and stated that my dad was the kindest, best person and that animals always loved him so he must therefore be a truly good person. My dad was always released without consequence and was always calm and smiling. He claimed it was his large stature that made him a target for security, but my mom's words had opened my eyes for good.

My dad's mom, whom I never considered a grandmother, was very unkind to my mother, sister, and me. She was so rude to my mother when my parents went to her house to announce their engagement that she later sent flowers to apologize. She's never been a kind, welcoming person, and I have no idea how my dad turned out to be so wonderful, positive, and selfless. Her side of the family used to have a Native salve that my sister and I referred to as "Magic Lotion" because it cured bug bites, cuts, bruises, stings, and many other maladies. Once my dad's stash was getting low I asked him for the recipe, and he said he'd have to ask his mother because only she and "Great Grandma" still knew the recipe. His mother refused to share the recipe with us because we weren't blood relatives. I truly don't believe it had anything to do with race, but it still hurt my feelings and reminded me that my dad isn't really mine.

My parents divorced when I was 14, after my mom had completed alcoholism treatment, and it was horrible. My dad had never officially adopted us, so he had no parental rights. My mom would never try to keep us from him though, and we would still visit him most weekends in the beginning, but that didn't last. He had lost his job, was living off of unemployment, and was a wreck in his depression. I tried to help him out by cutting coupons if I was going to stay the weekend, but he refused any help. He was ashamed at having to collect unemployment, he was ashamed of his second failed marriage, and I, selfishly, was too wrapped up in my own world to visit every weekend. I complained to my mom that I didn't want to have to drive out of town every weekend to spend time with him and that it messed up my weekend plans with friends. It was definitely a hard schedule to balance, and I'm thankful that my sister and I could choose when we wanted to spend the weekend at Dad's.

One Christmas, my dad asked if he could adopt us. Me, being a naive teenager, and not having fully come to terms with my family/identity, said no. At the time, I felt like it was a betrayal of my biological father's memory, that I would have to give up his name, my last tie to him. Now, I regret not giving my dad another level of connection to me. My dad raised me, even though he didn't have to, even though he didn't create me, he helped me learn and grow and chose to nurture my sister and me like we were his own.

I love my dad as if he were really my own, but there are many times when I feel the distance that a lack of a biological bond can bring. He missed my college graduation to go to Florida with his girlfriend, he doesn't tell me about important things sometimes like having knee surgery. He spends much, MUCH more time with his two biological kids and his three grandkids. I also understand that relationships are a two-way street and that I need to call him if I want to spend time with him. I just wish he called more often. It's very different from the bond I have with my mother, who is my biological parent. I speak with her almost daily.

My ex-step-siblings have complained that our dad isn't family-oriented enough, that he spends too much time with his friends, and not enough time with family. My ex-step-brother, who I haven't spoken to in years because of how disrespectful he is to my mother, thinks that our dad should have spent more time encouraging us to pursue things that we enjoy instead of pushing us toward things that he likes to do. I think my dad already spends a lot of time with his biological kids, but even if it could be more, I think our dad is amazingly dedicated and deserves to have time with his friends. He goes on 25-mile bike rides and plays basketball, tennis, and golf. Which parent doesn't want one of their kids to share a hobby with anyway? My ex-step-siblings don't seem to understand just how awesome of a dad they were born with, and I'm envious all the time that they have a bond with him that my sister and I can never have.

My third dad, Mike #2, married my mom when my twin and I were 15 years old. With him, he brought my last two step-siblings who were 19 and 17 at the time. All of us step-siblings got along great. We would go out to movies and hockey games, have game nights, and genuinely liked each other's company. We also agreed that our parents weren't right for each other. Mike # 2 and my mom had met in AA, which, I get, is important to someone who is fresh out of treatment and needs to stay on the road to recovery. Mike # 2 also had anger management issues, and, later discovered, a gambling addiction.

Despite his angry outbursts and his constant negativity, he had his redeeming moments. Mike #2 was sharp and witty, and we bonded over poking fun at my mom. My second step-dad taught me to drive and had way more patience at this than at any other task in our household. He would get angry if my mom wasn't paying attention to the show they were supposed to be watching together. My mom has always been a multitasker with many projects underway, all at once. If she had a bunch of fabric spread out over the basement table, it would drive him mad. He was a neat freak of epic proportions and would fly off the handle over some stray shoes at the back door.

Eventually, Mike #2 and my mom got divorced when my twin and I were still in college. They had only been married for about 5 years. They remained friends, and Mike #2 had even planned to come up to visit my mom's new business venture, but he never made it. Unfortunately, he had a heart attack while helping his daughter into her new house. I was really, genuinely sad at his passing. Yes, I was happy when he and my mom got divorced, because they were clearly better off as friends. But I still lost another mentor, even if I didn't call him "Dad".

I only keep in contact with one ex-step-sibling, because we call the same person "Dad". I do miss two of my other three ex-step-siblings, but when one bridge is burned, the distance to the other roads can be daunting. I've reached out to them a few times. One won't return my calls, and the other is just too busy to get together.

I called my dad yesterday to wish him a happy father's day, he was with his biological son and grandkids, out of state, and had forgotten to tell me. But I don't mind, I'm happy that he's having a good time, and I'll make plans with him next weekend.

My path has changed so much, that I'm not sure I'm on the right one! BS in Biology, passed up Dental School to work with my family for the last 8 yrs. I love reading fantasy. Hopefully, my first attempt at writing isn't too shabby.

More stories from Anna Michaletz and writers in Families and other communities.