How to cope being the wife of a Transgender

by Mandy 8 days ago in lgbtq

Male to Female after a decade 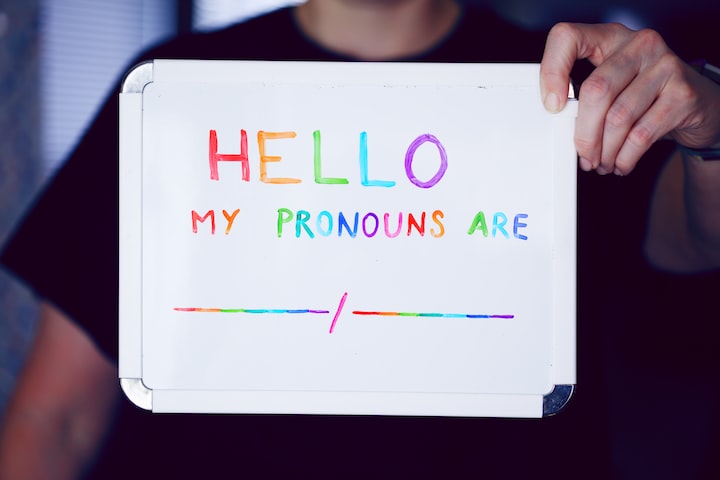 On a not-so-special day, my husband leaned in to say good-bye to me and whispered something in my ear. All this time later, I can’t remember what it was, but at the time, I agreed excitedly and he went on his way to start his day at work. I had a tubal litigation during my daughter's birth, fathered by my previous husband. My current husband wanted children and I wanted more. We had explored many routes over the decade together, but we were never able begin that adventure. The words he whispered sounded like the beginning of this adventure at the time.

I moved through the day; a smile glued onto my face as I pondered what we were about to embark on. I remember vividly, I was rinsing a plate that I had just lathered with dish soap when his words truly dawned on me. I dropped the plate and sat down, trying to breath. I wish I could remember what the words were that he had said at the time, I’m sure it was very obvious but I was oblivious to the idea that this would ever be a part of our lives. I was completely clueless and sometimes, I look back through this book of memories that I keep tucked safely in the back of my mind and I still find myself looking for clues.

Our relationship was far from perfect. I cannot speak to his feelings, but mine were genuine and strong. We did find ourselves frustrated at each other, more towards the end of our relationship than the beginning and middle, but we definitely rode a roller-coaster while we were together.

He was honest about his sexuality when we met and it didn’t bother me. Cheating was cheating regardless of the gender of the third party. He acted as any man, he cared for myself and my children as if they were his own. My children respected him as they did me and saw him as their step-father. He kept a job, he fixed things around the house, he loathed cutting his beard and he adored food. He promoted my creative side and was my muse. He helped me with college and emotionally supported me while I was on trial for my children – this is another story.

There were so many good things between us, it almost blurred the bad. Very early in our relationship, he had cheated on me and left me to live with a friend in another state. He left me at work with no way home in the middle of the night. I walked home and found him still logged into skype on my computer. The tears soaked my heart as I watched him and another girl pronounce their adoration for each other.

Shortly after this, I was hospitalized. I had my first of many miscarriages. Somehow, this brought us back together. But his transgressions didn’t end there. Within a few months, I was awoken to the text of a girl he was seeing at college that was breaking it off with him. Somehow, someway, he pushed himself back into my heart each time. I never saw myself as this kind of woman, but it seems until you’re staring into the eyes of someone you love that begs you to forgive them, you’ll never truly know what your answer will be.

Life moved forward and we began to make huge changes in our relationship, preparing for the years to come. We moved across the state to be closer to my children, promising ourselves that we would move to Alabama to be with his family after they graduate. The lingering hurt festered between us as I searched for reassurance that I was his one and only, but I vowed to the Lord that I would stay with him, my friends and family witnessing this promise. So, I searched for my own way to heal.

When he came to me, that one not-so-special day, and whispered in my ear, I thought this was the moment that would truly heal us. I thought this was going to determine our fate together. While it was, it was not the fate I had dreamed of. Nor him, to be honest.

As I sat in the chair, with soapy hands, I realized what he had said... but it didn’t make sense. So, I shook it off and went back to working on the chores that awaited me and anticipated his full and wonderful laugh when I told him about the thought that I had.

He came through the door and I felt like Lucille Ball, ready for the hilarious mishap to be over. I explained and his face flushed. What I thought he meant was he was a woman.

And I wasn’t wrong.

I was furious, and she couldn’t understand it. We had raised children together, played house together, delved into each other's souls, forgiveness was not vacant in our relationship... but this, this felt like dumped news on me. We were together for the better part of a decade and I had no idea who she was. My marriage certificate lied and announced husband and wife. Did I hate her like she thought? How could I? I still loved her for everything she was. But I was pissed. This was the most deceiving lie of our relationship.

lgbtq
Mandy
Read next: Understanding the Effects of Addiction on the Family
Mandy

I'm an avid writer, crafter... your typical jack of all. I'm a psych major, marketing minor and I have a degree in graphics design. Crafting you ask? I love to experiment and challenge myself. I'm here to release my soul, I hope you enjoy!

See all posts by Mandy →