He Gave Us Comfort Even After Death

by Pam Reeder 9 months ago in fact or fiction

The words were as though he were speaking them to us. 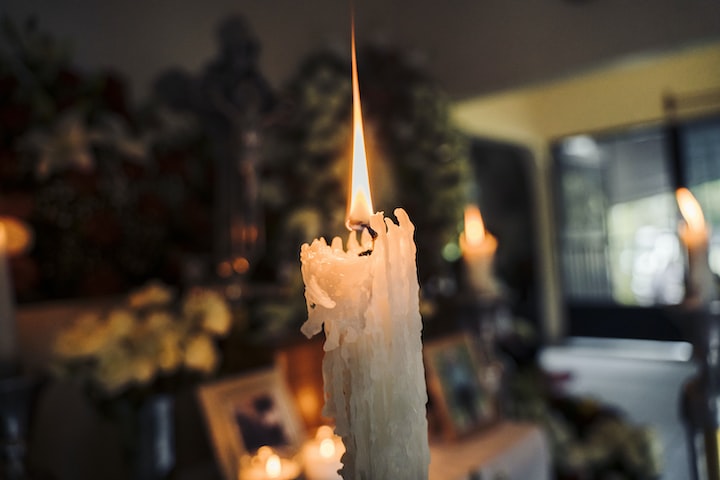 Photo by Diego Lozano on Unsplash

All lives end. They must. It's part of the cycle of life. But that doesn't mean we like it, or accept it. Losing people is hard. It never gets easier. Not even when you know it's coming. It's hard to say which is more cruel, sudden loss, or the known terminal spiral to death.

My father's death was the terminal spiral type. I was living out of state so my mother and brothers had the day to day of it as they watched my father disintegrate from the strong man he once was and succumb to the ravages of cancer and its treatment. He didn't survive the treatments. Yet they say the cancer killed him.

And now here we were ten years later confronted with a similar plight. It's hard to know the thoughts my husband was having about the news of his father. Death has a way of coming into my husband's life and claiming people close to him. It feels personal. The only thing more personal was when death came for him. A massive brain bleed and giant clot pressuring his brain causing seizures required emergency surgery this past Christmas. His survival and lack of permanent brain damage was a Christmas miracle they said. We cried in relief and joy. But then melanoma came just a few months later and an issue with his testes. He is battling his way through it all. So, mortality has been strongly on my husband's mind in a very personal way. And then news of his father was thrown into the mix.

He knew his father had been sick but the seriousness of it had not registered fully to him I don't think until we went to visit his father during his final hospital stay. He was a shell of a man, gaunt, sallow skin, with only a few tufts of hair left behind by cancer treatments. He seemed surprised and happy to see us but he wasn't talkative. We all knew without saying it where things were with his journey. "I just want to be done. Go home until the end," he said with a simple finality. After a few more minutes of chit chat he told us he was tired and wanted to nap. He thanked us for coming and apologized that the visit was so short for such a long drive. We never saw or spoke to him again. He went home until the end just like he wanted. Death came quickly for him. Just a few weeks later.

Being a no fuss, no muss kind of guy, he had prearranged his after death details. He was to be cremated and asked that his service be simple. My husband's sisters honored their father's wishes to the letter. It may have been a simple service but it was undoubtedly the best service I have ever been to.

I knew when I found this box it was a perfect place for my father-in-law's ashes until my husband finds a more permanent container. The saying on it was the type comfort my father-in-law would have offered to his loved ones on any given day.

The Pastor began to speak after a slideshow of photos finished showing highlights of my father-in-law's life. It was clear he was a family man always, first and foremost. Being married into the family late in life, I didn't know my father-in-law to the same depths that all his children and grandchildren did. But what I did know from their stories and the short time I knew him, he was the rock of his family. My husband's sister described her father very well when she said he was always there for them and he knew when to step in and have a say and when to stand down and be silent. He always knew intuitively what to do and say exactly how they needed, when they needed it.

So, knowing all this, the service should not have come as any surprise. It would have been exactly what he would have said to any of his loved ones aching with the loss of someone. Only he wasn't here to say it for them. But when the Pastor began to speak, I knew he actually was here.

Instead of making this service a chance to take advantage of an emotionally distraught group of individuals and attempt to steer them to God like I have seen so many others do, this Pastor gave grief counseling. He described the three roads ahead to be traveled. One road was memories, reflection on the good, the bad and the ugly. It's all part of the shared experiences and every drop of it paved the way to the present. So, review the past, laugh, love, cry, be angry, go through it all as you're able. The second road is the present. Where we all were, experiencing the loss. Feeling devastated. Forlorn. Wondering how we would ever be able to go forward missing the patriarch of the family. The rock of the family. The calm in their storms. But that brought us to the third road. The way forward. To go live the lives he would have wanted us to have. To become the strength and the rock for those behind us. To keep keeping on.

It was a very touching and heartwarming service, beautifully said. We thanked the Pastor for his words, letting him know it was the best service we had ever attended.

After a stop by his father's house to pick up a few things, we headed home. I couldn't help musing about the service as we sat at a traffic light. Just as the light turned green and cast its light on the hood of our van while we eased forward, it occurred to me, it truly was as though my father-in-law had found a way through that Pastor so that he gave us comfort even after death. The words were as though he were speaking them to us. He had let his family know everything will be okay. They will be okay. The future will be okay.

More stories from Pam Reeder and writers in Families and other communities.