Gin and Juniper Make a Cake

by Jeff Carter 9 months ago in literature 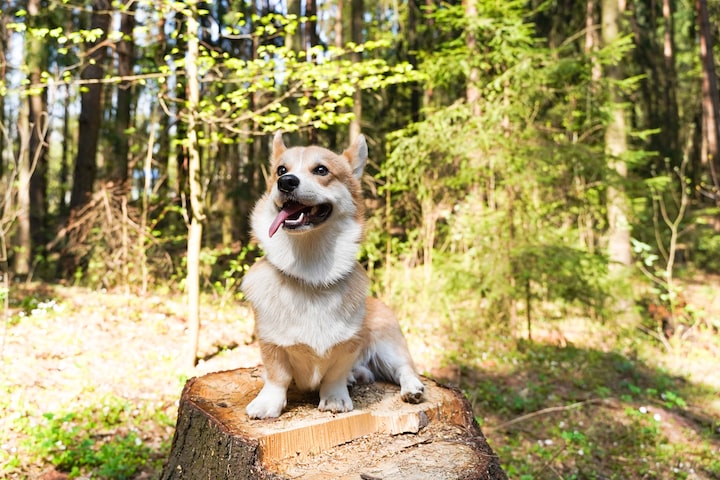 Photo by ULADZISLAU SINITSA on Unsplash

“Grandpa Lem, will you read me a story first?”

“Of course, go pick one off the shelf.”

Cassia loved picking books off grandpa’s shelf at sleepovers; especially now that she could reach all the way up to the second shelf without anyone’s help. All the best kid books were on the first and second shelves and the boring science books daddy liked to read were on the very top shelf. Those were so high above her head that she thought the clouds could touch them.

She ran her finger over the frayed covers reading familiar gold embossed titles like Black Beauty and Call of the Wild until she stopped at a little black book that didn’t have a title. She felt the smooth texture of the book as she pulled it away from the shelf. It was crisp and clean and had that vanilla-sweet new book scent.

“That’s a really good one, bring it here and I’ll tell you all about it.”

“Not exactly, that book is for magic,” grandpa said as he lifted her into the guest bed and pulled a chair over to the bedside.

“This is quite possibly the oldest book in my collection.”

“No, grandpa, that book is brand new!”

“I’m sorry, sweetheart, are you telling this story or am I?”

Cassia clapped her mouth shut in a tangle of pink-nailed fingers as grandpa continued, “Okay, as I was saying, this book is one of the oldest I own and it’s all about a girl named Juniper and her rascally dog Gin.”

Juniper loved to bake and dreamed of winning the golden grand prize ribbon at the county fair bake-off. Each year she entered and each year she improved, earning orange and green and purple ribbons, but never the top prize.

Living on a sheep farm in the country with her family made it hard for her to get ingredients for her cakes and pies; she had to travel through Foxhole Forest to the nearest grocer. Her older brother, Orris, could never join her because he was always too busy working with the sheep, when he wasn’t writing love notes to one of the local girls. Her younger sister, Angelica, was too young and preoccupied with drawing pictures of fairies and flowers to be of any help on the journey.

Juniper’s parents bought her a dog to guide and protect her on the dimly lit trail.

Gin was a small, but fiercely loyal, mutt. He could scare away any ruffians or animal with his bark, but easily fit in the grocery wagon while waiting for Juniper to load it up. He kept the nosy cat out of the kitchen when she baked and kept her feet warm at night. He was her best friend.

One particularly bright day, on the trail to the grocer, Juniper pondered what creation she would bake for the upcoming fair when, without warning, Gin took off running through a bushy patch of trees. “Gin, no!” she yelled to no avail. She abandoned her wagon by the trail and pushed past the curling ferns to find Gin belly deep in a rabbit hole kicking pawfuls of dirt in his wake.

“Gin, you scoundrel,” she said to him as she secured her hands around his waist and gently pulled him out. Securely gripped between the mutts teeth were a little black book.

With a little effort she pried the book from Gin’s teeth. “Someone’s filthy old secrets,” she thought as it had surely been buried deep for a long time, but as she brushed the dirt from the cover she found it to be fresh and clean, no torn pages, no scratches or dents. Opening to the first page she discovered a brilliant recipe for lemon drizzle cake, the second page was an orange upside-down cake, followed by pages of blueberry turnovers, cranberry poppy seed muffins, spiced crackers, cardamom and cream cookies, and caramel tortes. It was page after page of mouth-watering delicacies.

“Gin, these recipes are amazing! We have to get the ingredients for some of these and try them out. She slipped the book into her jacket pocket, stuffed Gin under her arm, and headed back to the wagon to finish the grocery trip.

Drooling over each page she discovered the recipe she wanted to try, and in honor of Gin finding the recipe book, she settled on an orange gin drizzle cake and purchased enough to bake three or four. That evening she donned her apron and measured and mixed until there wasn’t a clean utensil, bowl, or surface in the kitchen. She slid a cake into the oven, set the cow timer, and lay down to rest her eyes while they baked.

With one foot kicked over the back of the couch and her face firmly planted in a rooster embroidered pillow she let the Z’s float above her head. She didn’t even notice Orris come in from the pasture to find the book crisp and clean on the dining table.

“What’s this?” he picked up the little black book and flipped a page or two. Oh! Wow!” his eyes went wide with excitement and he galloped to his bedroom and closed his door with a click.

Eventually the cow timer rattled Juniper awake while Gin continued his belly-up drooling. She sat up and rubbed the snooze from her eyes. Without haste the cake was out of the oven cooling and ready for its first soak of orange gin sauce. She looked for the book and saw that it was missing from the table where she had left it.

Worried the whole thing was a dream, she tore apart the kitchen and then searched around the living room and found nothing. Outside the window she could see that her parents were working near the barn and wouldn’t have stepped foot in the house all day. She then moved toward the bedrooms, stopping at Orris’ room first. She knocked without answer and opened the door. It was empty. She continued on to Angelica’s room and found her on her belly coloring.

“Jelly, have you seen a little black cookbook?”

“No,” she replied without lifting her head.

Juniper started to take her exit when she noticed the little book Angelica was coloring in. It was her little black cookbook.

“Angelica, where did you get that book?”

“Orris dropped it in the hallway on his way out.”

“No!” Angelica stood and clutched the book to her chest, “it’s my coloring book!”

“Angelica, that’s my book,” she lunged toward her sister and Angelica, with the speed and agility of a toddler, jumped up and through Juniper’s legs. The chase commenced through the house and the commotion was only broken by Orris opening the front door.

“She has my cookbook!”

The siblings tumbled to the floor in a tangle of hair and limbs simultaneously reaching for the book and pushing each other away from the book.

“What’s going on in here?!” The boom of their father’s voice broke the scuffle. The siblings froze and the book fell to the floor.

The children fell silent and jumped to their feet at their kind, but stern, father’s voice.

“I found a cookbook in the woods,” Juniper started, but was quickly interrupted by Angelica.

“It’s not a cookbook; it’s a coloring book, Daddy.”

“Do you mean that mess?”

Their father pointed to Gin standing over shreds of teeth marked paper.

Their father picked up Gin by the middle and pulled shreds of paper from his mouth, “this little book caused all this commotion? It looks like shreds of blank pages.”

The silence among the family was only broken by their mother entering the room with a young stranger. “And who is this nice young lady on my porch,” their mother asked, guiding her through the front door.

“Hi, I’m Ora. Orris invited me over for dinner.”

“Ora and Orris,” their father smiled, “that sounds like poetry.”

Even though the book was destroyed the family sat down and enjoyed a dinner while talking about their mysterious experiences: Juniper’s recipe creations, Orris’ finding the words and encouragement he needed in poetry to talk to his love, and Angelica’s pretty pictures drawn in all the colors of the rainbow. Even Gin wagged his tail at the excitement of the toy he found in the woods, scraps of paper stuck between his teeth.

When dinner was finished Juniper presented her creation. The sauce glistened and dripped off each sharp edge of the bunt. A mouth watering steam escaped as she cut into still warm sponge.

“This cake is absolutely delicious,” Ora said as she took her first bite. The rest of the family tried to agree, but couldn’t with their mouths so full.

“You’ve got to enter it into the fair bake-off. Can you remember the recipe?”

The following week she did. That was the year that Juniper unanimously won her gold ribbon at the county fair.

“Did Juniper get a prize with the gold ribbon, grandpa?”

“Woah, that’s big! What about the book?”

“You said Gin tore the book apart. Is that why it is magic, did it put itself back together?”

“I never said the book is magic. I said it is for magic; the magic isn’t the book itself. The magic is what Juniper and Orris and Angelica made it into. One saw ingredients, one saw poems, and one saw art. It was even magic to Gin because he saw a toy. The book was the key to unlocking the magic that was already in them… and this book, dear granddaughter, is for you.”

Cassia took the book from him and flipped to the first page. In fancy writing on the first page was an inscription, “to our beloved granddaughter Cassia who loves stories. Here is a little black book you can use to start your own stories. Make magic. Love, Grandpa Lem and Grandma Jun.”

I enjoy writing short stories in magic realism, horror, and the bizarre. I have ambitions to write a novel.

Receive stories by Jeff Carter in your feed
Jeff Carter
Read next: The Mother