by Kris Brinkerhoff 5 months ago in parents
Report Story 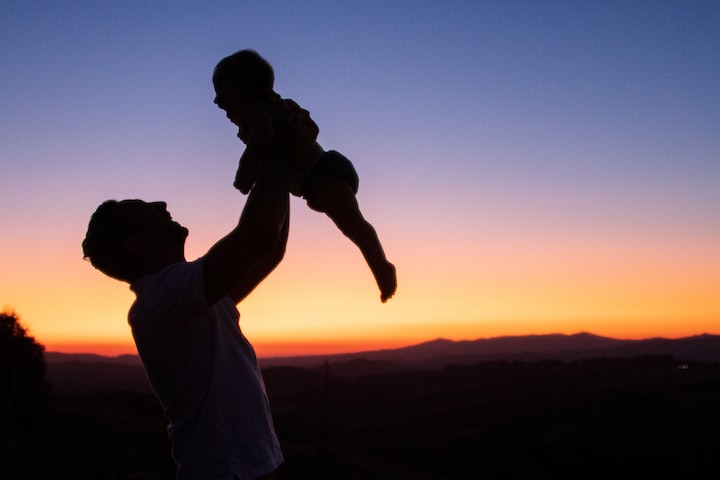 My dad grew up on a farm, the youngest son of 22 children in Lovell, Wyoming. Growing up in hardened Wyoming you had to be pretty tough. Growing up the youngest son, you had to be tougher than all the other brothers with their demands, teasing and roughhousing. My grandfather’s first wife had passed away leaving behind 11 children. To help take care of those children, he remarried Vera Allred who had a little girl from a previous marriage and they had 10 more children. Hence, the household of 22 and wide-eyed looks on people’s faces as I tell his family story.

Looking back on my Dad’s life with Wyoming’s hot summers and freezing winters, it made for some memorable stories. In their home, the center of activity was the kitchen. The old house out on the farm consisted of the living room, where the oil furnace was for heating the house with its pipe going up through the rafters, a kitchen, two bedrooms, plus the screened-in porch. One bedroom was for the parents and the other one for the girls. The boys all slept three to a bed out on the big screened-in porch.

In the winter, they put plastic up to try to keep out the wind and snow. Dad would tell of times when the inside brick-type walls would have ice on them. Yes, you read that right! The inside walls would have frost on them. He also recalled waking up some mornings with snow on top of their beds due to the prior evening’s windy snowstorm.

My father being the youngest boy in the family would often fall asleep behind the big oil heater in the living room. Once he was asleep, the older boys would pick him up and lie him down in one of the beds out on the cold porch. His little warm body would quickly warm up one spot, then they would move him to the next spot to warm it up. Once they had moved him around they left him in the last spot where he would sleep 'til morning not remembering anything about his nighttime travels.

Work on the farm was long and demanding no matter your age. During the summer, one of Dad’s chores as a 10 year-old was to gather up the cows in the evenings back to the corrals near the farm. He had played hard after dinner and didn’t have his mind on them “varmints” until it was quite dark. He quickly went out before it became any harder to see and tromped off to gather the cows from the outer pastures. Yet, the cows were no where to be found and not even a “moo” could be heard. They should have been right here waiting for him like usual. Now only the full moon gave its light in the darkness. Dad quickly maneuvered himself to the pasture higher up from the farm. Still there were no cows.

With his meager faith in those pesky animals wavering, he remembered what his Mother told him he should do. So he sank to his knees and offered a quick plea to God for help to bring in the cows. All his life this memory has stuck with him from his simple prayer. He had a feeling of peace and comfort come over his little, old self letting him know that everything would be alright. He headed back home and there were the cows looking nonchalant and chewing their cud. They had come back to the corrals by another way. Boy was my father relieved.

My Father was a jack of all trades as he would take on various jobs outside of his 8-5 work to support our family. One of these jobs was to sell the benefits of putting insulation in the attics of homes. We learned firsthand from him on how to to be a salesman. Many people came over to our house for demonstrations on the excellent qualities of insulation. We heard the presentation many times of how it would retain more heat in the house during the winter and block extra heat from coming in from the roof when applied in the attics just above the ceiling. The best part of this demonstration for my young mind was when he brought out the blow torch.

This part of the presentation kept my attention. To show the fire resistance of the insulation, my dad would melt a copper penny in the palm of his hand with a layer of insulation between the blow torch’s flame and his hand. Moving the flame back and forth, he applied the heat of the flame to the copper penny and it melted into a ball in his hand while the insulation would only become slightly blackened but never would start on fire. This intrigued me as the insulation was recycled newspaper shredded into small bits but it was sprayed with a special chemical substance.

After people watched his demonstration many signed up for this service. So on our Saturdays we’d load up bags and bags of insulation and drive through town in the ”insulation” truck as we dubbed it. We managed pulling the long hose connected to the hopper where we would dump in the compact bags of insulation. The alternating tines turning inside the hopper would break apart the insulation and funnel the churning bits down to the smaller part which connected to blower. The strong action of the blower’s motor pulled the now more air-filled material out of the hopper into long 2 1/2” hoses into the house.

For the person with up in the attic it was a messy job. Dad would come out looking like a freshly flocked Christmas tree with a mask—only he was all gray from blowing the recycled insulation while crawling through the attics on his knees.

The one thing I really appreciate about my dad is he was very much a family man. He would come home and find Mom and give her a big hug and a kiss telling her how much he loved her. He would open a box of ice cream and cut it into slabs for each of us as a treat on the weekend. He attended church services on Sundays. He took each of us kids one at a time to spend time with us when he could. He protected us kids from our ornery roosters. He played basketball and football with us. He loved working in our garden of tomatoes, corn, cucumbers, and beans. He made things with motors go. He loved eating homemade whole-wheat bread with milk for breakfast with peanut butter and honey as a snack and tomato or cucumber sandwiches. He could handle all types of animals. We had goats and milking schedules to follow. We had chickens, some ducks, a couple of turkeys, and pigeons for which to feed and care.

These stories from his childhood plus some others my siblings knew are all I have now. As my Dad is already gone. I’m just now piecing together the various threads of his life, the fun memories and those parts which mattered—which made him a man and a father. I have stories that made him who he was and explain what he did and how he lived. Being there growing up with him, working and playing—you believe he will always be there for you. But now he’s not and it is hard.

Now that I’m a husband and father, I’ve spent many a time wishing I could ask him questions about things. I see I took my time with him for granted—not knowing how much time we’d have together. Yet, I am grateful for all I the pieces I do remember and for his example and life.

Now I am gathering the scattered memories I have of him for my children. And I realize that some things in my life are now patterned after his. I take on various extra jobs to support my family. I love peanut butter mixed with honey, eating homemade whole-wheat bread with milk and tomato or cucumber sandwiches. We have a large garden with beans, tomatoes, squash, cucumbers, flowers, onion, potatoes and peppers. We have ducks, chickens, a dog, a cat, a goldfish, a pig, and some rabbits and we attend Sunday services. We spend time together as a family with games, movies and going on walks. I only wish now I could ask him about motors and how to make them go. . . I love you Dad.

More stories from Kris Brinkerhoff and writers in Families and other communities.