by Julie Tara 7 months ago in humanity
Report Story

Whose Responsibility is it? 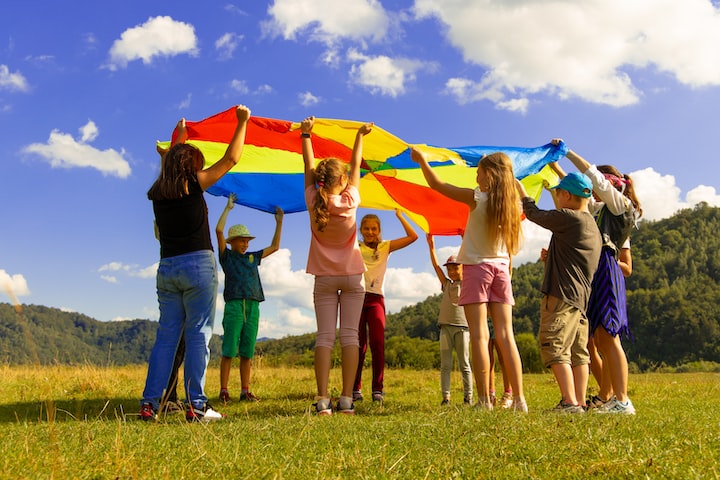 Photo by Artem Kniaz on Unsplash

One of the greatest gifts I’ve ever received so far in life is the deep honour of being a mother. I have three fabulous children all close in age. The first, my daughter Shenoa, was born when I was 25; the second, my son Ryan, 19 months later, when I was 27; and the third, my daughter Corina, 24 months later, when I was 29. Wow, was I a busy and blessed Mum! As obviously challenging as motherhood is, I felt like I took to it like a duck to water. I felt so immersed in all the loving and tending, and it all felt really natural, like I was born to do this particular job in the world. I loved this new role with all my heart and soul. Did that mean I didn’t make mistakes, sometimes big ones? Of course not! As the proverbial saying goes “Babies aren’t born with a How-To manual!”… so very true. And even if you read the latest and greatest books on mothering (which of course you have no time to read once they’re born), it’s still an untrodden path you are taking. It necessitates a huge, ongoing dose of love, courage, commitment, patience, wisdom, being in the present moment, and doing your best day after day, and night after night after night after night….

Along with many other highly important aspects of motherhood, one of the ones I took to heart was the health of my children. You might say “well, yes, that’s obvious”. But, in today’s world, is it? I had already deeply studied the ancient wisdom of natural healing modalities, and most especially Macrobiotics, for several years before having children. I cleansed and purified my body for about two years before even thinking about getting pregnant with my first child, for I had learned that this is a great idea, if you want to give a child the best possible start in life. Of course the other parent, if there is one, has a responsibility for their children’s health too, but I have found that, generally speaking, the major work of this falls to the mother. She is the one who needs to become really well informed, coupled with her inborn wisdom, on the best protocols for her child’s health on a daily basis. For myself, my husband worked full-time and was often away on business trips, to provide for us and his other children. I was so lucky that I got to stay home full-time with our kids until they were all of school age. Not daycare or preschool, but kindergarten on up. If I add up the years I was at home with them it was about 10 years — this was a great gift for all of us, one I did not take lightly, as I knew many other mothers who had to go back to work soon after their child was born. I will be forever grateful to my husband for making this work for us all in this way.

Protecting and cultivating true health has always been of primary importance to me. Perhaps it’s because I witnessed such ill health with my mother as I was growing up, and didn’t like or agree with what I saw of Allopathic Medicine. Her addiction to pharmaceutical drugs and consequent derailment of body and mind was very frightening to witness year by sobering year. Perhaps it’s because my dad was a doctor, but couldn’t seem to help my mother and left us high and dry with an opiate addict. Perhaps it was was my stepdad, who was also a doctor, and happily supplied the constant stream of opiates. All of my 4 stepbrothers were doctors too in the end. Perhaps its because I’m a Virgo. Whatever the reason, I took the guardianship of the health of my children super seriously.

I breastfed each child for approximately 18 months or so each. At 6 months or so, as their teeth began to come in, I started them on simple solids, soft homemade cream of whole brown rice, oats, barley; slowly adding simple pureed vegetables such as carrots, pumpkin, greens. Introducing each one at a time. For the first month or so, I would put the tiny spoonful of food into my mouth first for a moment or two, to pre-digest it, adding the enzymes that they hadn’t yet developed, as if I was a mama bird. Then I would put it into their mouth to eat. This is the Macrobiotic way, based on centuries of natural mothering. They always did well with their initiation into solid foods…. gently does it. Soon I could dispense with that practice and they were eating well, without tummy upsets. As they grew up we ate a typical Macrobiotic diet, a plant based, whole grain way of eating. This mainly consists of homemade grains, legumes, vegetables, sea vegetables, soups and natural cooked fruit desserts. Simple, wholesome, and awesome for our bodies. We didn’t eat any animal food at all, nor dairy, nor simple sugar. Though I did use other sweeteners like barley malt and rice syrup as desired.

No fast food for us. We didn’t have extra money to go out for dinner, even if we’d wanted to. And unlike today, there were almost no natural, organic, macrobiotic or vegan restaurants to go to anyway! So everything was homemade and simple. My children thrived. Yes, they got colds or flu from time to time of course. But this was natural, helped build their immune system and they recovered quickly. They were robust, slept well, had hearty appetites and grew to be bright, athletic, intelligent kids, full of vibrant abundant energy. Other Macrobiotic kids were the same way, and since this was our community I really didn’t see much childhood sickness at all. Not until my children went to public school that is. Then I saw how some other kids were just not fairing so well. They were pale and sickly a lot of the time. It made my heart really sad to see this, and it was in stark contrast to what I was used to seeing with all the little Macro munchkins.

One stark difference between Macrobiotic children and others was that we chose not to vac-cin-ate them. Now, you’ve got to know, I read every single book I could get my hands on about this issue before any of my kids were born. And even though I found the evidence to be conclusive about the weakening of the body, due to the accumulation of adjuvants when having so many shots (with some combined) in such a short amount of time…. still it was a very challenging decision to make. My dad, the famous UCLA doctor, was absolutely furious about my husband’s and my decision. But as my kids grew he could not deny that they were far far healthier than most other kids he knew, including his very own young child that he had much later in life, who was almost the same age as my eldest. We never really came to a happy agreement about this sovereign decision, and I did appreciate his point of view of course. I was sorry he was so angry, but I did my research thoroughly and was very well informed. I also met children that were negatively affected in the aftermath of all the shots they’d had, some of them seriously, irrevocably affected. Also, I had a fully functioning intuitive sense. One of the greatest things mothers have going for them is their stellar “mother’s intuition”! Protecting my children was my #1 responsibility. I didn’t take it lightly for a moment, ever.

Now we have threats to our children’s health that I didn’t have to deal with when mine were small, thank goodness. One of the main ones is the toxicity of our food and water supply and GMO’s. Another is the toxicity of ubiquitous EMF frequencies, in the home, in the schools, just about everywhere, other than out in the wilderness. And now with so many space satellites beaming down antithetical frequencies to life, it’s actually very hard to find a pristine uncontaminated place in the world. Of course there are many other problems that exist now, that didn’t exist back in the 1980’s. It’s difficult to keep your kids safe these days. Now I have 4 delightful grandchildren and see the dilemmas their parents have to go through, bringing them up with the best choices they could possibly make through their own well rounded studies and in good conscience.

I couldn’t be more grateful for the teachings of natural health, based on the laws of the universe, that I studied for years, prior to having my kids. I do think the main responsibility for our childrens’ health falls on the parents, and primarily the mother. It is up to her to learn as much as she can about true health and how to protect, cultivate and maintain it. Ultimately teaching her children how to take care of their own bodies. My children have many very effective natural remedies up their sleeves for when they themselves are under the weather, and/or their children. These remedies go back centuries, they work and they follow the ultimate law of “First, do no harm”. They are safe, non-invasive, non-chemical and highly effective. They can use them if they so choose for the rest of their days. And hopefully, they will pass these potent healing ways onto their children, educating them well in the most important education that exists… taking responsibility for and wise care of your own body, mind and soul…. your freely given gift of health.

Oh yes, last but not least, in our final conversation on this earth (just before my Dad unexpectedly died), he unexpectedly said to me enthusiastically “Julie, you are light years ahead of me in medicine!” And then he said the most beautiful thing I’d ever heard him say to me in my entire life… a veritable blessing “Fly like an eagle, because that is who you are!” And so it is.

As a kid I was a passionate reader of almost anything I could get my hands on. Later I became as passionate a writer, offsetting my highly physical world as a ballerina, enjoying the introverted timeless flow of bringing words to paper.

More stories from Julie Tara and writers in Families and other communities.