by J Michael Jones 15 days ago in grief

A story about leaving 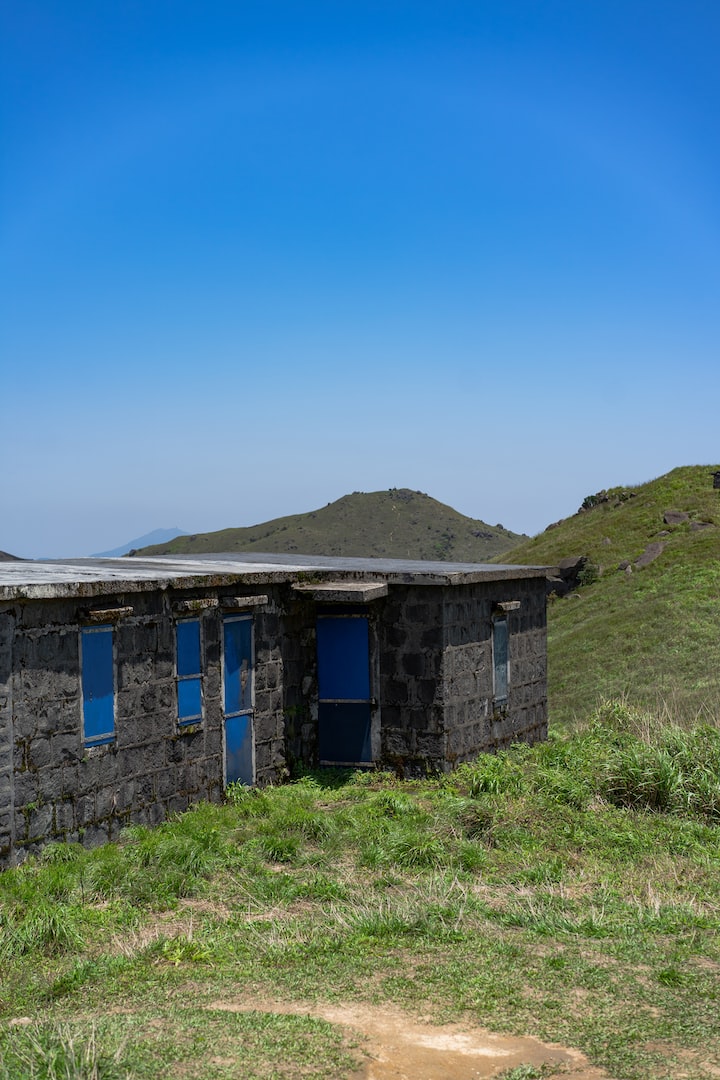 Photo by Big Dodzy on Unsplash

The universe was out of kilter. I was coming to Tennessee to say goodbye to my dear mother … three years late. It was unconscionable that she had slipped through my fingers into the red earth while I was three thousand miles away. Damn that pandemic! Damn my illness that followed. A preacher saying words at the cemetery promised to Face Time the service. But there was no signal at the graveside. Painful silence and a blank screen in Seattle. It was as if I had gone from the beloved … to the nothing.

I approached her grave, still with its mound of clay, kept free of encroaching crabgrass. Beside her mound, my dad’s. I looked to make sure I was alone and kneeled, then prone, my heart nearest hers. “Mom, I’m so sorry I wasn’t here to say goodbye. Please forgive me. I love you,” I murmured into the dirt.

Tears choked my dirty face. She had lasted until her ninety-fifth birthday. I’m glad she didn’t live to see my diagnosis; it would have broken her heart. I wouldn’t make it to my sixty-fifth.

Six feet below me was the breast that I had suckled. The ears that had attended to my hopes … and sorrows, the lap I had sat on and the face I had kissed a million times.

I looked at her name inscribed on the granite monument. Three years of grit. I cleaned it with a tissue, my tears as the solvent. Rolling over to the supine between the two mounds, I felt safe there. Looking up, I studied the ominous clouds forming over the mountains. It was like when I was a scared child and slept between them. For the first time I felt safe from the monster that lives in my marrow.

I would spend the morrow chasing the sun back to the west coast. Dusting off my clothes, I climbed back into the rented Corolla.

Each crossroad, house, barn, and woods were bookmarks, key places of the narrative that had methodically spun the fabric of my life. I drove past my childhood home for the last time. Surreal, not permitted to trespass. I drove up the hill where I learned to mount a bike, a sled, a horse … and an aspiration.

I turned right on the county lane. The road was chip seal, recalling when it was gravel. Now, it lay serpentine around the hills like a shiny silver ribbon. It’s the path the mastodon, giant sloth, and camel had surveyed and scored. It’s where Cherokees walked, then the men with racoon hats and women with bonnets driving wagons. Later, our herds of boys on bikes with sissy bars and banana seats going so fast, leaving only a flash of chrome and tassels in their wake.

I passed Wayne’s house. He was my best friend. It was a two-car garage that his dad, Earl, had built in 65 for shelter while he planned a mansion beside it. Red brick, five bedrooms, and a pool was his intent. I watched his dad pour the footings, lay the cinderblocks, and cover the top of the garage with a flat roof. Then he bulldozed back the ground, uncovering a red clay bank, the footprint of the home to be.

Wayne and I spent summer days lying on his lawn, a blade of that grass between our teeth, looking at the thunderstorms organizing in the stratosphere. We would build small paddle boats powered by rubber bands to transport our army men from one side of the pool to the other. We would stock the pool with tadpoles. We would become excellent swimmers.

Boyhood is the pinnacle of life for a man, where his dreams are preludes to the future. But the brick mansion never materialized and no pool. Earl brought home trunkfuls of bricks from the masonry store where he worked, piling them as pillars in the woods.

Wayne and I buried a time capsule in that clay bank. I chose my black address book as the medium. Someone gave it to my dad, and he didn’t want it. The book was of the finest leather with gold lettering and tabs for the alphabet. In school I would sniff it and suck on the corner of it to taste the salty bitterness of the tanning.

James Bond and Jerry West were my heroes. Like 007, I put the names of each girl I knew in the book. Beside each name a ranking in stars based on traits. But then Susan Williams found the book and read it out loud to the girls during recess. It was so embarrassing that I wanted it entombed.

Between its pages, I put my Topps Jerry West card wearing his 44, my favorite stamps, newspaper headlines, and a brand new 1965-dollar bill. Wayne and I interred it in the red clay bank inside two freezer bags wrapped in duct tape. We marked the spot with a maple sapling.

The last time I saw Wayne was during the summer I turned fourteen, he, a year older. He drove his mother’s car to my house with only a permit. I was boiling sassafras tea in a pot over an open campfire. Wayne walked toward me, his eyes red and watery.

I was dumbfounded. We had girlfriends, but I barely had gotten to the place of holding hands. I wasn’t even sure how you could get a girl pregnant. I thought you had to sleep with them for the entire night. Sex wasn’t taught in the Bible belt.

“Yeah. Her dad is the Baptist minister, you know. He told my parents that I had to marry her. I must drop out of school, quit the scouts, get a job, and live in my aunt’s basement in Sullivan. My life’s over.” He leaned on the hood of his car sobbing. I stood as stiff as a statue. Hugging another boy, even to show compassion, would start them down the path of homosexuality, wouldn’t it? Wayne left, climbing back into his car inebriated on grief, fumbling his keys. I never saw him again, ever. My boyhood becoming fragile, the dawning of adulthood … where dreams falter.

Tragedy visited that family again in 1970 when Wayne’s dad walked into the woods, put his double-barrel shotgun in his mouth, took off his shoe and pulled both triggers with his toes. My dad, insensitive to violence since the war, said at the breakfast table, “Yeah, the sheriff searched and there was no trace of his head. Just a neck and jaw.”

“Bill!” countered my mother with a frown. “They arrested him for stealing from his company and he had just made bail.”

The last tragedy came in 72 when Wayne, after Kay divorced him, enlisted in the Army. The Chinese shot him down over Cambodia … now an MIA.

“He had to have a good reason.”

I observed that garage-house deteriorate with each annual visit. A big zig-zag crack formed on the wall. The mortar joints coming apart with the shifting footings. Someone filled the crack with caulk. It opened again over time and they filled it with tar. The place fell further into decay. No one knew what had happened to Wayne’s mom and his little sister, Lucy. It was like the mountain winds had blown the family away ... without a trace.

With this last drive by, I stopped. The dark clouds had just dropped their deluge as I walked across the yard to the storm door. I saw eyes inside, peeking between the curtains. I knocked.

“Hi, I used to be best friends with Wayne Painter, who lived here a long time ago.”

“Yes, I know. Have you lived here long?”

She unhooked the chain and stepped out on the small landing in her housecoat, leaning on a cane. “Uh, I bought this place from a young couple five years ago. Oxycontin broke them up. This place was in my price range. I’m on social security since my stroke.”

“Stroke? Aren’t you too young for that?”

“My husband beat my head with a Louisville Slugger.”

She snickered, “He works at the jail. He’s a cop. We signed a mutual responsibility form, and they dropped the charges.”

“Mutual? Did he have a stroke too?”

“I grew up just up the road. I’m Terri Johnson’s son.”

“Yes. This is my first visit to town since, and it will be my last. Wayne and I buried a time capsule in the clay bank over there. Perhaps I could dig it up?”

“Do you know where?”

“Yeah, we planted a maple sapling in front of the spot. I watched it grow over the years into a giant tree, then someone cut it down. I still see the stump.”

“A friend cut it down for me … for heat. Otherwise, I would have frozen to death as I only have a wood stove. The furnace conked out. The roof leaks and the walls are crumbling, but on a social security of seven hundred a month, it’s the best I can do.”

“I have the ash shovel next to my stove, but it’s small.”

I looked in the woods where Earl died. The pillars of old bricks, now covered by kudzu, looked like a lost Buddhist temple, reclaimed by the jungle. I dug through the wet clay as if it were marinara sauce. My shovel was red, as were my fingers, and knees. I dug deeper into dryer clay, looking for the gray tape to appear. Instead, I saw shiny gold. I dug around the object. It was a Bell jar lid, a quart, an enigma. I dislodged the jar. I took it over to a concrete birdbath and washed it off with the fresh rainwater. Green papers filled it. I worked with the container between my knees and my hands on the lid until it twisted off. Inside one-hundred-dollar bills were jammed, in pristine condition. I took the jar to my car where it was dry. It took twenty minutes to remove the money, counting it as I pulled it out. There were two hundred one-hundred-dollar bills. I studied them, and the newest one was 1970. That was the year they arrested Earl and he put the barrel in his mouth.

Fifty-five years had passed since the crime. There must be a statute of limitations. I didn’t need the money. My health insurance was covering my treatments, and I had savings that would last longer than me.

I put the money in a trash bag. I knocked and the lady opened the door again.

“Did you find your time capsule?”

“No, I didn’t. But I found something else … and it belongs to you.”

I handed her the bag. She peaked inside.

“Yep. I think it was buried by the man who built this garage. He was saving it to build his house … but then killed himself. He would want you to use it to fix the foundation, the roof, and the furnace. When you finish that, buy yourself the prettiest dress you have ever seen and go out for a steak dinner.”

Her mouth gaped open, as was the bag in her hands, her bewildered mind empty of words, but eyes full of tears. I climbed into my red Corolla and drove up the silver ribbon between the hills. Earl must have found my notebook when he interred the jar … or did he?

Lives in the San Juan Islands of Washington state, the author of eight books, five of them novels.