by Kevin Slimmer 5 months ago in children

How I told stories to my children 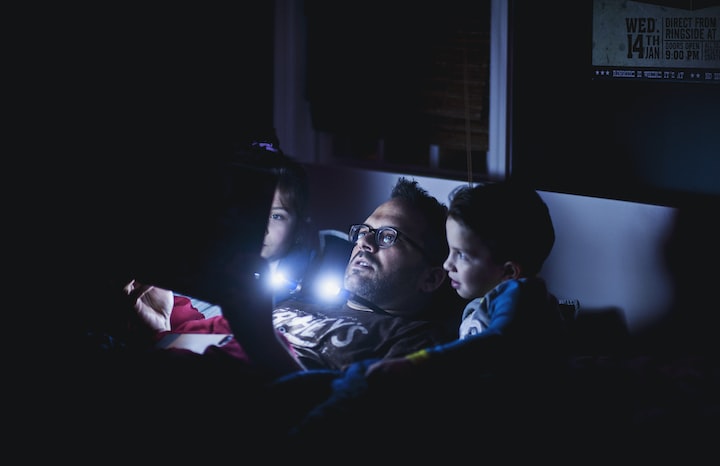 One of my favorite memories as a child was when my mother would tell me stories she made up. She would always include us children in the stories, but instead of using our real names, she would use our names backward. So the story included me (Nivek), my two siblings (Sirk and Mik), and our dog (EiloJ). These stories were usually set in the woods and would take us on an adventure. My mother loved stories, she has written poetry and recently wrote her first children's book. Stories were part of our lives.

Fast forward 40+ years and I now have 2 adult children and a 5-year-old of my own. When my adult children were little, I carried on the tradition of my mother and told stories with their names reversed, usually in the woods too. However, I started to create my own traditions.

When I was in my early 30s, I decided to check off something from my bucket list and learned the guitar. I wanted to incorporate this into our bedtime story routine. So, I would use my guitar for sound effects. I would play ominous chords, strum a harmonic, and drag my pick down the low E string to make it sound like a door creaking open. Sometimes I would create a song to go along with our made-up story. At the end of the story, I would ask my children for any song requests. My daughter usually requested Maroon 5's "She will be loved" and my son always liked, John Prine's "Angel from Montgomery", among other favorites.

This then morphed into Bedtime improv. I would ask them for the characters in the story, where they were, and other small details. Using this limited information I would create a new original story, most nights. I would also ask them what they wanted an improved song about. My daughter usually asked me to create songs about "Spongebob" in which I would inevitably sing in Patrick Starr's voice. My son usually went with "Star Wars" or "Lord of the Rings."

This all led me to write my own song for them in which I would sing to them almost every night after requests were taken care of. Here is a sample of the lyrics:

There was more, but I never wrote it down and I'm not sure of the rest. It even had a nice melody for the chorus.

So, now I have a five-year-old and I have started the tradition over again. The first time I sang him a song was when he was about a day old. My wife was still in the hospital and I stayed with her. She barely slept and didn't want him out of her room even with the nurses offering it. So when he cried, I would pick him up and walk him around the room silently singing to him, "Angel from Montgomery" and for some reason, "Spirits" by The Strumbellas. Imagine a father walking his one-day old son around a hospital room singing "I've got guns in my head and they won't go." It worked. Desperate times call for desperate measures. Well since that day I have sang songs to him and around him regularly and he now loves music. Bedtime was always my wife's thing so I'm not the one that usually puts him to bed. The times I do, he participates in Bedtime Improv with me, like his brother and sister used to. Instead of "Spongebob", "Star Wars", or "Lord of the Rings", he usually asks for a story or song about the Avengers (mostly Hulk), and sometimes "Star Wars", King Kong, Godzilla, or about rocket ships. The only thing I can't do with him is, include his name backward in the stories because I can't do that to my sweet Parker.