3 Reasons Why Working Mom Guilt Will Cease To Exist

by Katharine Chan 12 days ago in advice 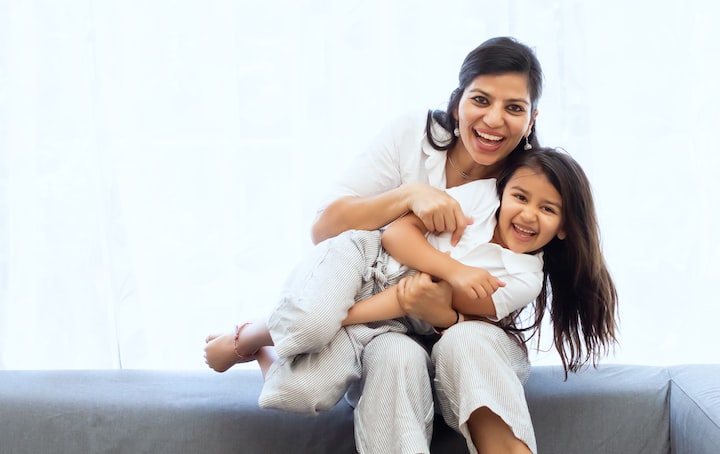 Photo by Vivek Kumar on Unsplash

Last year, I experienced my first bout of working mom guilt. I shared some helpful tips for how I was managing these feelings.

However, the guilt kept coming and it ate away at me, deteriorating my insides like an ulcer slowly getting acid dripped on it à la Chinese Water Torture.

These tactics were great at the moment but like a bandaid being used to heal a broken bone, it only got worse.

Over the past 6 months, I realized the guilt was merely a symptom of a larger issue.

How do I know I'm a good mother?

I needed validation. I couldn't validate myself.

How does one gain self-awareness?

Through self-discovery, self-reflection and self-improvement.

So I discovered that I was insecure at work and at home.

Next, I self-reflected and realized my past perfectionist tendencies had returned.

I was losing myself, trying to do everything well. I needed to stop, take a break and regroup. I was having an identity crisis. This wasn't me!

Then who am I?

And lastly, I'm NOT the overworked, multi-tasking maniac who is doing laundry and packing lunches at 10 pm because she stayed late at work to meet some crazy deadline.

I am not someone who tries to do everything. I am unbalanced.

I do well on some things (like meal planning and managing project deadlines) and I don't do well on other things (like coordinating play dates and team building activities).

I'm human. Why strive to do well on things I'm not good at?

It was like one of those classic light bulb moments!

The goal of a 'working mom' is to balance both the working part and the mom part.

When did that become the goal?

Why is it about balance?

It's as though when an effort is put into one role, the other role suffers, like a lose-lose situation.

Why can't it be about doing well in each of the roles to the best of our ability given our current state, mentally, emotionally, physically?

Who cares about balance? Why not just triple down on what we are damn good at and own who we are?

Call me a dreamer, an unrealistic optimist, someone with rose-coloured glasses! Perhaps even call me a privileged, entitled Millennial!

But fuck the guilt!

I honestly believe that my generation will be the last group of women who will experience 'working mom' guilt.

Self-awareness will become a basic foundation for every new mom

My vision is that this guilt will eventually cease to exist because the next generation of women who become mothers are more self-aware and know where they stand.

The term 'Emotional Intelligence" only started gaining popularity in 1995. At the time, I was in grade 4. I didn't even understand the concept until I entered University almost a decade later. I barely understood the difference between empathy and sympathy and I was that straight As, overachieving Asian kid!

The next generation of women (born in 1996 onward) have these concepts ingrained in their minds. Some of them have even received social-emotional learning since they were in Kindergarten.

Generally, their values are about authenticity, staying true to themselves and individuality which leads to increased self-awareness.

With increased self-awareness, the guilt will cease to exist.

If a woman really knows who she is, she will be secure in her role as a mother. She won't feel guilty "neglecting" her children while she attends that 5 pm meeting.

On the flip side, she will also be secure in her job, not feeling an ounce of guilt when she declines that 5 pm meeting because she wants to (NOT "PROMISED TO") watch her son play soccer.

No one's going to use the term "working mom" anymore

Whether a mother stays at home, works from home or works outside of the home, she is working.

The term is freaking old school. It puts women in boxes differentiated by money instead of the value she brings to her family.

So a mother who doesn't earn a traditional income means they don't work?

What about the profit she makes reselling old toys and clothing?

Or the hundreds of dollars she saves her family by finding baby items on Craigslist or in Facebook mommy groups that would have cost a fortune?

What about the amount she saves on childcare by coordinating schedules with neighbours and other moms so she can go run errands while her kids are being watched?

What about the 100 bucks she saves her family a week because she's spending time planning meals, collecting coupons, participating in surveys and optimizing the grocery store's loyalty points program?

What about her passive income? Her investments?

With the increasing number of ways to make and save money, it's just impossible to label a woman as a working mom. Because all moms work.

And eventually, when the term dies, it'll get buried with guilt like a dried-up piece of turd hanging off a soiled diaper.

The mindset that "moms know best" will become extinct

How come there isn't such a thing as working dad guilt?

Because traditions, social expectations and old school government policies have made it acceptable for a man to work a day after his child is born.

He goes back to work while mommy stays home, sitting on her comfy rocking chair, nursing that babe, waiting for her man to bring home the bacon.

Excuse me while I vomit just a little…

But when mommy goes back to work, she's playing catch-up while fulfilling all the household duties she used to do when she was on maternity leave. Hence, there comes the guilt of not being able to "do it all."

But that only plays a part in why moms do more parenting duties than dads.

Can we stop making jokes about how useless dads are?

It's not only offensive to men but it's also offensive to parents (like myself and my husband) who believe and actively practice gender equality and equity when it comes to parenting duties.

It really irks me whenever someone references "babysitting" when a dad is watching his kids.

Right…because they're employed by their wife? Are you fucking kidding me?

Aside from the act of pregnancy, giving birth and breastfeeding, there is absolutely nothing a man can't do. A dad can do anything a mom can do.

And depending on the man, he may be better at some parenting things than his wife. It comes down to personal strengths and playing to what we are good at as individuals regardless of our gender.

This mindset that "moms know best" is actually our kryptonite. It inflates our egos (even before we become mothers) and makes us believe that we will be the "better parent" because we are women.

So when a woman enters motherhood, she puts herself on a pedestal as the all-knowing, all-mighty, "Supermom" who makes to-do lists for her lackey husband to complete and corrects him every time he doesn't do it her "moms know best" way.

It's a ridiculous expectation that sets moms up for failure, disappointment and of course, guilt when those unrealistic expectations don't get met.

I predict the whole "moms know best" mentality is going to become extinct as the next generation of men become even more involved and more invested in their roles as fathers.

Men are becoming more self-aware, more in tune with their feelings and understanding the importance of their role in their child's life.

I mean just look at all the freaking articles and blogs that's been written about how to get a man to become more emotionally intelligent.

Eventually, the mindset will change from "moms know best" to "parents know best" or better yet, "no one knows best, we just love our kids."

What can a mom do while we struggle in this transition phase?

It's great the next generation of women aren't going to experience working mom guilt.

But what about the moms now?

It's really all in our heads and we need to understand why we feel guilt.

And what is our sense of security based upon?

How self-aware we are.

So own your motherhood. And own your career. No one put a gun to your head and forced you to work for a particular company.

If you work at a company that values face-time at meetings, political clout, relationship building and 12+ hour days, you're not going to be physically there for your kids if you want to be successful.

But if you're missing those 5 pm meetings and you're not putting in the effort and producing work that is as good as someone who does not have kids, then that person without kids will surpass you, get the promotion and raise.

It's the hard truth. Accept that and fucking embrace it.

Own whatever role you are in. Don't feel guilty. I'm not going to judge you. I don't care what you do. And you shouldn't care about what others think of you.

Do what makes you proud to be taking oxygen from this earth and exhaling it into something productive. Whatever that is…own it.

So Readers, do you think working mom guilt will always be there or is it something that's going to go away?

Read next: Stories from "La Frontera"