by Charleigh Frederick 8 days ago in book reviews

“We need above all a theater that wakes us up: nerves and heart… It is upon this idea of extreme action, pushed beyond all limits, that theater must be rebuilt…" 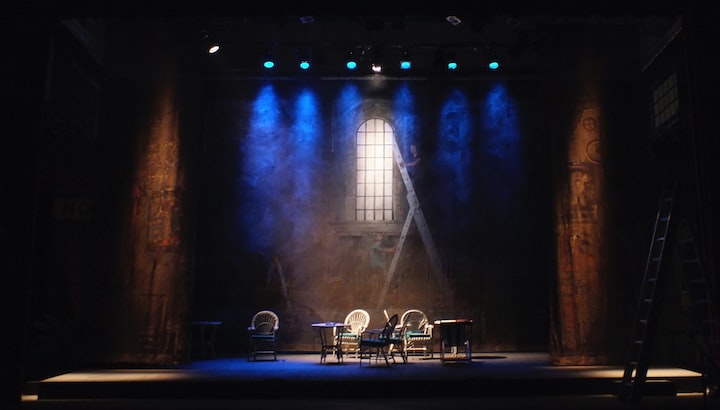 Photo by stefano stacchini on Unsplash

The Oxford Illustrated History of Theater was a fascinating tale of the history of the world of theater. Spanning from the dawn of theater in greek society, to how theater changed in a modern age, the book leaves off in the early 2000s, saying what theater has become. Having a plethora of historians contribute to the book created a wide view point on the history of the theater, it’s creation, and it’s growth. Although occasionally biased the book does a good job of showing theater arts history. Main author and editor, historian John Russell Brown, brilliantly tied together the stories of the history of theater, providing a portal to the stages of our ancestors.

The Oxford Illustrated History of Theater included delightful photos that truly helped to strengthen the writing and help the reader grasp an understanding of the world of theater. The issue of over depicting an event rather than fully explaining it’s meaning and importance was not an issue. From pictures of recreations of what the greek theaters looked and felt like, to the Schaubuhne in the Berlin palace, the images truly showed how theater affected it’s culture. One image that stands out in the book was a painting done by Johan Joseph Zoffany that clearly shows Charles Macklin. Macklin played the same theater stage role for half a century in the 1740s. Macklin left his home in Ireland and moved to England to pursue acting as his full time career. With him he brought a new, more natural style of acting to the english stage.

By focusing on the development and interaction of cultures The Oxford Illustrated History of Theater was successful in linking the spread, acceptance, and yearning for the theater. Even cultures that were hesitant to adapt the theater into their culture, such as the Romans, were mentioned and analyzed. Authors each took a chunk of time and showed how theater was changing, developing, and effecting the culture of it’s people as well has been affected by it.

In early history the theater was created to praise the greek god Dionysus. The very word theater is Greek. The people of Greece created many shows in Dionysus' honor, but soon theater had given rise to a wide cultural spread and development all over the world rather than just being a Greek tradition to honor one of their gods. Starting in 2600 BC Egypt had theater shows as a part of their festivals. Egypt grew the art of theater, developing also a more structured opera. The operatic culture of the Egyptians spread then to Africa and helped to create a ritual African theater. From there oral telling of theater spread the form of theater art all over the world including to Europe, Ethiopia, and Mali in 1200-1500 AD. The Americas were one of the last places in the world to adapt the art of theater as a part of their culture.

After the World Wars theater saw a great rise in connection to society. People began to want to forget the horrors of the war and turned to the stage as a form of escape. Because of this the entertainment industry grew vastly and with it grew the art of theater which now had new form machinery built from technology invented for the war. Theater heavily relies on what the society is interested in seeing. Post World Wars society craved new forms of theater and drastic new shows also came into play. Shows that relied on empathy took shape. New theaters were an audience sits all around a stage rather than just in front of appeared. Professor Innes does a wonderful job showing the change of the stage and the performers during this time period of change.

The 1970s ushered in a new world of theater as computer-controlled micro-technology caused a new definition of theater lights, sound effects, and theater realism. As attendance at theater shows began to go down, new modern special effects began to be what filled seats. England’s theater community took a dip in the 1970s resulting in several theaters to close. America managed to keep its theaters afloat by having large sponsorships. Theater made it through the 70s on special effects and bringing back old classics that audiences knew and performing shows based on historic events such as the show Les Miserables.

Special effects didn’t own the theater past the 70s. By the 80s the need for special effects was replaced by the need of having good actors and a good story plot. Historian Brown tells how later the theater then was taken over by a new wave of acceptance for all. The times had changed. Men could play women and vice versa. Race was no longer as strong a factor in casting. Stereotypes were thrown to the wind. Even non-human beings such as animals or dolls could get roles. Theater has come to the point where anything goes and you’re only limited by your own imagination. The Oxford Illustrated History of Theater truly makes one feel that the theater can become whatever one desires so long as they have guts and an audience.

The Oxford Illustrated History of Theater lacked a criticism of the world of the theater, rather focusing on the positive effects of theater on a community and making a victim out of those persecuted for participation in theater no matter the time, culture, or reason for persecution. The book could have been strengthened by providing a deeper expansion of why the persecution took place and having them not always be in the right. Theater often deals with sensitive topics, even today, some of which can be viewed as offensive. The beauty of theater is that it doesn’t back down, but rather grows. Theater spreads and often after one show you want more, but that doesn’t mean theater is always in the right and always okay. Rulers depending on their form of government can say no to theater or say to get off of government land. Although sometimes they take things too far it would have been nice to hear why they have the position they do and how they came to that rather than just saying the big bad government said no.

As John Russell Brown, editor and main author of The Oxford Illustrated History of Theater wrote, “Theater has its full life only in moments of performance before an audience.” Therefore the story and depth of theater can be tricky to capture. Michael R. Booth, John Russell Brown, Louise George Clubb, Victor Dixon, Martin Esslin, Peter Holland, William D. Howarth, Christopher Innes, Colin Mackerras, Michael Patterson, Leslie du S. Read, Farley Richmond, Leon Rubin, Oliver Taplin, Peter Thomas, and David Wiles successfully manage to capture the spirit of theater and retell it’s history in a fascinating and interesting way. All those with a deep love and appreciation for the art of the theater will truly love this well written, truly satisfying history textbook.

“We need above all a theater that wakes us up: nerves and heart… It is upon this idea of extreme action, pushed beyond all limits, that theater must be rebuilt… a total spectacle… Words say little to the mind; extent and objects speak; new images speak, even new images made with words. But space thundering with images and crammed with sounds speaks to.” - The Theater and its Double.