by Argumentative Penguin 6 months ago in student
Report Story

Let them fight their own battles. Advice from the front line of CrotchFruit diplomacy 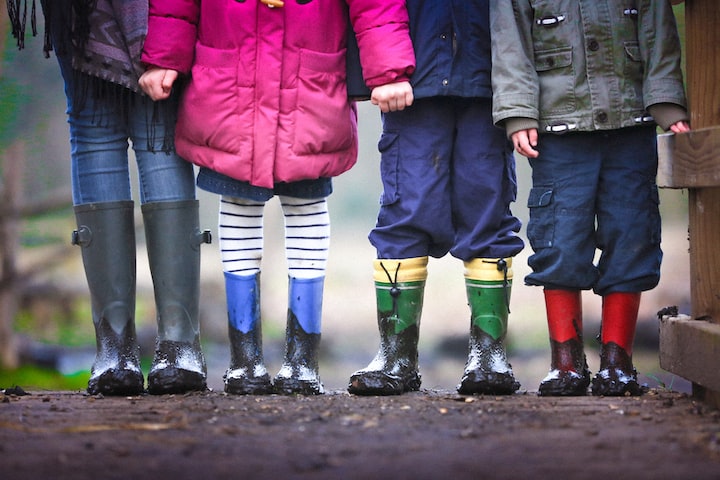 Photo by Ben Wicks on Unsplash

Children aren't as fragile as you think they are. The more we treat them like fragile little creatures, the more fragile they actually become. I can tell you with absolute certainty that the biggest threat facing the happiness of children today is overbearing parents.

When I was a teacher I would frequently ask children to put together a small skit to perform to the rest of the class. This helps them get better at expressing themselves, it helps them work together and builds confidence and storytelling skills.

The skits themselves are universally dull.

But on this particular day, you find two afflicted crotchfruit in opposition. Suzie and John are sitting with their arms crossed and refusing to look at each other. They are currently not friends. Suzie is staring at the floor, John is pulling bits of rubber off his shoe. All is not well in this group.

The other children don't really know what to do. One of them has come over to elicit my help. The group is at an impasse. They know if they don't resolve the issue they won't have anything to show the rest of the class… in their little brains, this is a fate worse than death.

So what do we do? Whose fault is this and how do we solve the problem?

How did we get here?

What began with careful diplomacy between John and Suzie has ended acrimoniously, they're both children with strong personalities. They both have a clear idea of what they want the group to do… but unfortunately, they have opposite ideas. A failure to convince the other led to 'yeah but' outflanking and now total warfare has broken out.

There's a lot of *sniff* Suzie *sniff* isn't doing *sniff* what I *sniff* tell her to. Then there are howls and counter-arguments. The sniffing and wide-eyed dewy stares continue from the other side.

Children are naturally egocentric and a big part of the reason they come to a drama class is to learn how not to be. I can tell you within about thirty seconds of working with a new child if they're an only child, if they're the youngest, oldest or somewhere in the middle. They have it written into their behaviours like a signature.

So what do you do? This is your class. Do you hear both ideas and select the best one? Would you set up a system where they do Suzie's idea this time and John's idea next time? Would you prioritise Suzie ahead of John to readdress the patriarchal imbalance? Oh, I forgot to mention John is black.

So here's what you do. I looked stern and told them to 'sort it out yourselves' then reminded them they don't have much time.

The important thing is to do this every single time. Initially, the whole group is horrified. This isn't how life is supposed to be and it certainly isn't how they've come to expect the world. A responsible adult is supposed to come down and act as a moral arbiter. An authority figure to dispense wisdom and justice from a place of knowledge.

Faced with the clock running down and the prospect of absolute embarrassment at not completing the task John and Suzie will compromise around 50% of the time. One will give a little ground, followed closely by the other.

The rest of the time they won't give any ground at all. Which is when the third character in this little crotchfruit triumvirate arrives. We'll call her Poppy.

Poppy will take one idea from both and present a middle way. She doesn't want to do either idea fully, but she's got the compromise skills. She's quite often the eldest in her sibling cohort. If neither John nor Suzie take up her offer of the middle way, Poppy will gather the rest of the group and form a breakaway production.

That breakaway production will be hugely successful, spurred on by the ticking clock and the fact there's a new way forward. The other kids will follow her instructions. Suzie and John will likely get last-minute bit-parts in Poppy's show.

Poppy would stand as an independent in any election and Poppy dispenses justice better than any teacher can. Often the trick to running a good drama class is knowing how to spread your Poppys amongst the Suzies and Johns.

Kids that don't like each other often find themselves producing their best work when playing together with a common purpose. It's something reflected in the modern world of politics too. Consider what happened in the War Cabinet in Britain from 1939–1945. Nothing in adult life suggests you're going to like everyone in your workplace, why should kids be any different?

The skill is working with people that you don't really like. That's a skill that adults seem to be losing.

When you return at the point of the deadline, you will likely find the same group working together cohesively and with good humour. Suzie and John will still be wary of each other, but they will muddle through and play happily. Kids are very fickle like that.

So your classes weren't fun for the kids?

Of course they were. I can generate fun out of nothingness, that's what a good drama teacher does. But not everything children do should be fun. Children need to learn about manipulation, they need to learn how to get others to do what they want. They need to learn to cooperate and when to walk away, that's done through play.

To presume that play is always fun is fundamentally misunderstand the nature of play itself. And it's here that we have a problem, one that is being exacerbated year after year by increasingly involved parents.

Parents are taking the edge off play. They're making it safe. They're making it as sanitised and pleasant and tolerant as possible. Children are given explicit instructions on inclusivity and any and all conflict is immediately challenged by an adult.

Helicopter parents arrive and distribute justice the way they think it should be done.

Parents and teachers explain with faux patience that everyone has to play together. Then they go back to their office jobs and political systems where that simply doesn't hold true. It's hypocritical bullshit and the kids know it.

Children are told that we should all be inclusive and caring and sharing. That is the way society should be and that is the society adults think they're shaping.

In reality, they're killing the very skillset required to achieve this utopia they're trying to forge.

The Dark Side of Play

Childhood is cruel. Social manipulation is a skill. Now before I get steamrollered in the comments, I am not advocating letting children bully each other. In this example, Suzie and John weren't bullying each other. They disagreed and they lacked the skills to get through the situation.

Being stressed by the complexity of the world and learning to cope with your emotions is an integral part of becoming an adult. If everyone was against bullying as vociferously as society seems to be, we wouldn't have a problem with it in the workplace.

I'd argue we do, and I'd argue that's because many people have lost the skills inherent in compromise and democracy.

The more we try and implement a tolerant society, the less tolerant society becomes. The irony is beautiful. We have to experience intolerance to recognise it and to be able to challenge it in future. Our personalities are shaped by the various knocks and bruises our ego sustain over the years.

If we consistently supervise and interfere with their play they won't learn the skills needed to communicate effectively. By interfering in play, and by denying them face to face time with each other, we will be shortchanging them on their ability to debate, to hold nuanced positions and to respond with empathy rather than anger.

The results will be dynamic. Skyrocketing anxiety, a breakdown in social cohesion, an inability to maintain interpersonal relationships, and the rise of addictive escapism. Young adults trapped in narcissistic bubbles of one, floating through life and viewing other people as commodities.

We're only twenty years or so into the digital age and only a decade into the social media age. It isn't too late to understand the vital role that play has in shaping our personalities and understanding why children must be left alone to explore their own conflicts a little more.

Society is fracturing into an increasing amount of Suzies and Johns and we're lacking enough Poppys in the adult population to set them straight. A generation of children raised relatively play free, in a social media bubble are coming of age. I'm not in the slightest bit surprised the suicide rate is skyrocketing and everyone is a victim that isn't being listened to.

This is the world we created. So please when you see kids in conflict, for the love of all things holy, leave them to it

Playwright. Screenwriter. Penguin. Big fan of rational argument and polite discourse. You can find me causing all sorts of written mischief wherever I may be.

More stories from Argumentative Penguin and writers in Education and other communities.