Dropping out; The reality

by 𝙺𝚎𝚕𝚕𝚒𝚎 𝙳𝚘𝚞𝚐𝚑𝚎𝚛𝚝𝚢 ☾ 10 months ago in student
Report Story

Sometimes it is the right decision 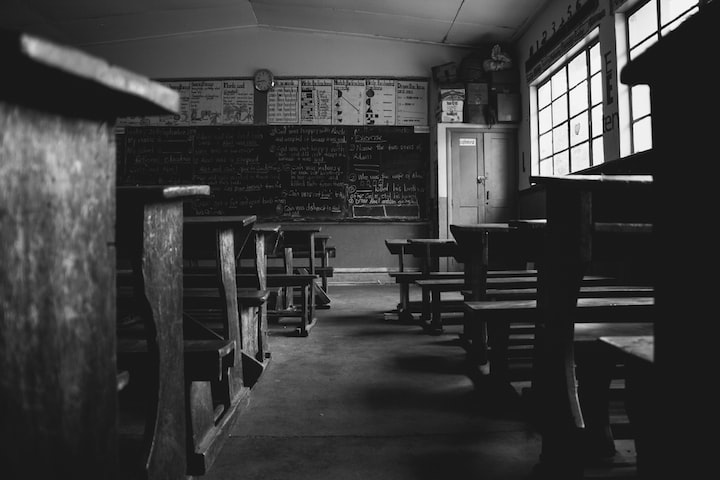 Photo by Mwesigwa Joel on Unsplash

As a high school dropout, I often have people tell me that they’re ‘So Sorry’ about me not finishing school. I’ve had neighbors, Relatives, Strangers, and even future employers offer their apologies and condolences for the untimely end of my education.

-But I’ll tell you my personal favorite response…

...And that’s the truth, I’m not sorry for dropping out and I never will be.

A lot of people don’t grasp the reasons that people drop out, For me it was my mental health and the treatment in school, But for others, their only option could be dropping out and pursuing a trade or maybe getting a job to be the source income of their family.

My point is that there is a significantly large stigma against people who drop out or the action in general. Not everyone who ends their high school career early is a delinquent or going 90 miles per hour into a dead-end life.

When I was a freshman in high school, I had been sure it would be the start of something great. That summer I had binged all six seasons of ‘Gossip Girl’ and decided I could try to have the confidence of Blair Waldorf but have the heart of a Humphrey- And I definitely tried.

I wore my best clothes and I gave my best smile at school, And yet I was bullied- I had been teased and names were thrown my way, But I did my best to grin and bear it until I could make everyone see I wasn’t the person they thought I was.

Two weeks later I was homebound.

Teenagers aren’t nice, But sometimes teachers are much worse.

I didn’t return to school for another year, For my Sophmore year I decided to go easy on myself and just dressed in whatever I could find- I wanted to focus on my mental health, I had family issues going on (Something teachers were informed about) and I just wanted to survive the year.

My English teacher made the decision that I wasn’t cut out for her class and chose to make my life hell from the moment she introduced herself. She berated me in front of all my peers for days on end, The anxiety and stress I went through were enough for me to have my first mental break.

According to sources (My peers), She continued to make fun of me and insult me while I was absent and long after I left her class. That same behavior was imitated by my peers and I was often treated like a basket case or a delinquent by both classmates and school faculty.

I never quite got away from the ridicule that I endured during my first two years of school. I made friends here and there, I suffered typical teenage angst and drama- But I was bullied no matter what I did, I was treated like a delinquent when I hadn’t even broken a law or a rule.

My mental health suffered its biggest blows during those four years and I even entered an Out-Patient facility multiple times before I had to come to terms with the fact that the school environment wasn’t for me.

Whenever I think about my high school experience and the way it had been, I often reflect on a very particular moment.

In my Junior year, I was placed into a biology class where I eventually became the only girl. There were originally three of us but they both switched classes and I was stuck in a room with a teacher who did nothing to tame the unruly boys in my class- And when I say unruly I mean they were actually horrible.

Most days I would enter the class and the whiteboard would be littered with sexist and misogynistic insults, Sometimes they would openly insult or taunt me- But my mother had raised me to never back down to ignorance, So I stayed for as long as I could.

On some occasions, I would have a panic attack and would land myself in the nurse’s office. However, This particular day I was physically sick and miserable- I left my biology class early with only a half-hour left of the school day and complained about my migraine and stomach pains.

The nurses tried to send me back to class after a cup of water and five minutes of rest- After I explained to them I wouldn’t be returning to class because being physically sick to my stomach wasn’t conducive to a learning experience they scolded me for ‘Skipping class’.

Five minutes later, They threaten to call my principal because I was being ‘Difficult’.

The principal joins the room to see the nurses scowling at me as if I was ruining their day and after I explained my situation he offered to have me sit in the office until the buses arrive- (He agreed that I can’t be learning when I feel so sick.)

That should be the end, Right?

If you recall me saying I had issues with some faculty in my Freshman year, It’s definitely relevant in this story. Three years prior I had been forced to meet with the school psychiatrist..We didn’t hit it off, In fact, she was rude and had me in tears.

That same psychiatrist happened to see me sitting in the office and she decided to accuse me of skipping and lying. By then I had been so frustrated with being accused of lying and skipping that I had blatantly told her my situation and that the principal was letting me sit in the office.

She physically dragged me to her supervisor who proceeded to scream at me for ten minutes and tell me I needed to learn that there were consequences for my actions. He screamed at me for so long that I ended up with a panic attack.

All because I was sick and couldn’t learn that way.

Sometimes the walls of a high school aren’t the best way for someone to learn, Sometimes the conventional ways of learning aren’t what works for everyone. Sometimes dropping out is what’s best, Sometimes it is the right decision.

It isn’t something you should apologize for.

More stories from 𝙺𝚎𝚕𝚕𝚒𝚎 𝙳𝚘𝚞𝚐𝚑𝚎𝚛𝚝𝚢 ☾ and writers in Education and other communities.