Daebak! K-drama is teaching me Hangul

by Cat Turner 3 months ago in how to
Report Story 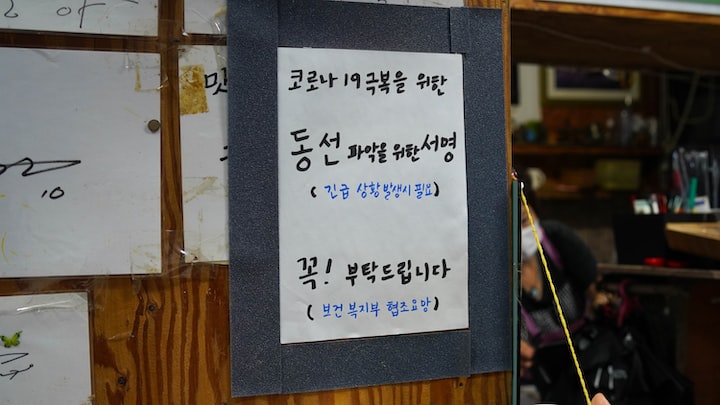 Photo by yeonhee on Unsplash

I took Spanish during high school and French in college, and languages confuse me greatly! What tense do I use? Is that a masculine or feminine object? Does the subject go first or last in the sentence? Why does a pronoun have a different verb form than the actual object? I am all mixed up in languages. Then, I decided I wanted to learn Korean/Hangul. It is one of my student’s fault. He said - I think you would like this show that is on Netflix. Hooked at Asian drama, I joined Viki and binge-watched multiple shows.

I started watching Asian dramas. Two years later, I realized I had learned some words and phrases in Hangul. One year in Duolingo helped me acquire the basic alphabet. I could walk the streets of Seoul and correctly sound out every word I saw without understanding. Sounding out the letters is useless. Pronouncing B-l-u-e is no help if the word matches nothing in my understanding. That is what it is for me with Korean. I can read and sound out all the syllables. Where is the train? The bus? The bathroom? I am no help. But give me a drama where you can’t marry her; she is your sister! Ban Dae! I completely understand the storyline. The company's president accidentally sleeps with a low-ranking company employee and ends up marrying her because she is pregnant. He gets amnesia and does not remember their son. Years later, he sees a familiar boy on the playground but does not know why the Mom turns away from him in tears. I am ready to test drive my total lack of understanding of Korean after 18 months of Duolingo.

When I finally visit Korea, I am running for Soju. Everyone always drinks it in the dramas in green bottles. I have yet to figure out what I am supposed to call the young, hot bartender, though. Since I am over sixty years old, I will never use the term Oppa. It works wonders for a younger girl to get a young man to do something for her, primarily if she uses a high-pitched, little girl voice. I am unsure how I will respond if someone calls me Ajumma however, the term fits my age. A middle-aged woman named Ajumma often misbehaves, so maybe that may not be a good word for me. When something good happens - Assa! If I want to watch a historical Korean drama earlier than the 1900s, I look for Sageuk.

One thing that keeps tripping me up on Duolingo is the formal way of speaking with different styles.

Jon Dae Mal - Mind your manners, as my Granny would say. Seniors expect a formal speech from their juniors.

Aniyo is an important word to know - otherwise, you might agree to crazy things. Just say Aniyo, um, no. That works in formal and informal situations. I watched hundreds of episodes of shows before I realized ne means yes. It flies by so quickly that translation misses the word quite often.

I watch several Korean drama shows, and there will be this long phrase. Seriously, the actor may speak for several seconds. The translation will be “She said hello.” Then I realized that this was ‘Hi.’ Annyeong Haseyo. Eight syllables for what would be one in English. The language is lovely to hear as it is lyrical. The sentences often go up in pitch even though there is no asked question.

Once I realized that pronouns rarely are used, I started focusing on learning verbs. I still have a long way to go because I spend more time playing games on my phone and watching dramas than studying. Still, I know the important ones.

Daebak (Wow), I have a long way to go to learn Hangul (Korean)

My stories range from the whimsical to the down and dirty of a serial killer. A balanced left and right brain with my varied life experiences make me an eccentric bird. I have been blogging two years now. I hope you enjoy my stories.

More stories from Cat Turner and writers in Education and other communities.