All the Reasons Why I Hated Maths

by The Dani Writer about a month ago in student

And maybe you did too 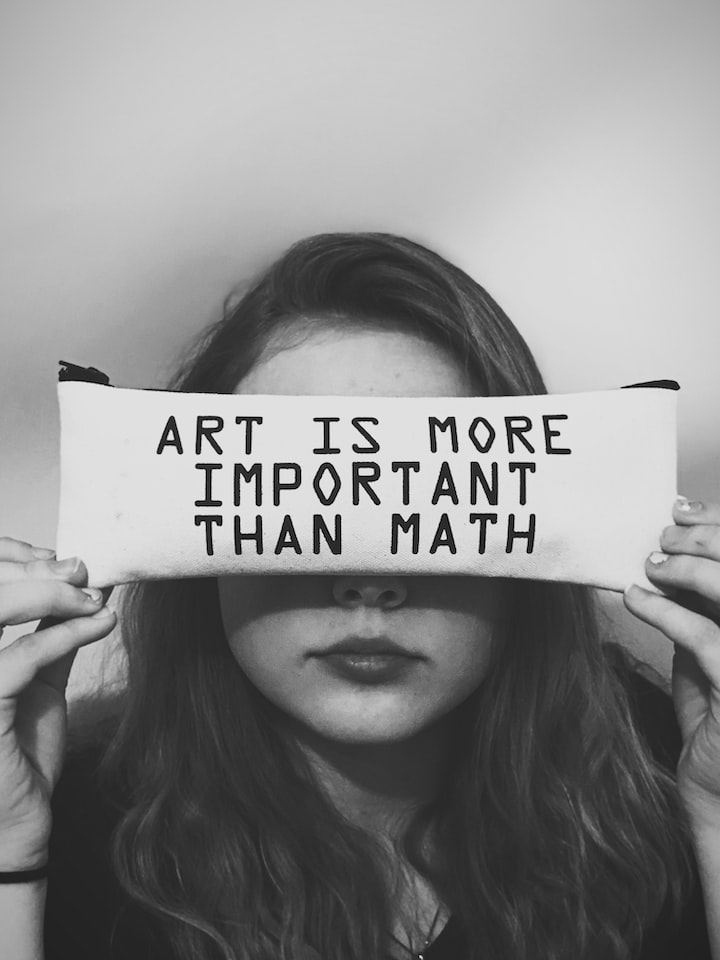 Yep. Gonna show a phrase and you say the first thing that comes to mind.

Such a range of responses!

A substantial amount of positives. But quite a few negatives. And that’s okay. This is a learning moment. Hopefully also a teachable one.

See, I’ve been thinking about maths classes from my early years and what went awry. Hindsight is a beautiful thing when there’s enough distance between you and whatever event of your past, whether it’s a relationship or the task of proving a mathematical theorem.

I’ve been reflecting on those classes because at some point through secondary school (read: high school because I came up under a British system of education,) I began to hate maths. What’s clear in decades-later-safe-adulthood-reflection is that I didn’t always feel that way. A bunch of ‘somethings’ and ‘someones’ completely turned me off the subject.

And I didn’t wake up this morning with a burning desire to write about Mathematics either.

I’m just as astounded as you are.

But back to the concept of that learning moment…

Often, it’s a combination of things (variables) that can impact an end result.

There was a huge disparity in my grades and final report cards when starting school at four years old, as my literacy skills were far and away advanced beyond my math skills since I entered school reading.

Bear in mind those were the dark ages of education.

My parents were of the era mindset that the teacher was always right, no matter what, and every word from them was gold.

Teacher comments regarding me were consistently along the lines of “Comprehension, spelling, and grammar are excellent. A little slow with Maths computation but works steadily.”

What my parents read: Your daughter is struggling in Maths, falling behind, and needing an extensive intervention before her lack of competency ends the world as we know it!

Around my fourth year of primary school math comments, Mom bought me supplementary math workbooks and I even went to a maths tutor for a while a few months later. I didn’t hate math then. I just didn’t excel at it like with English. I did it because I was told to, not seeing much practicality in it besides counting my marbles, jacks, money, or whatever other childhood possessions were valued.

By the second year of high school, the tides began changing with more complex mathematical concepts beyond computation and Venn Diagrams with teachers who probably satisfied degree requirements for the job but were not as effective in knowledge concept transference. I recall one teacher telling a student after explaining something for the fourth time “If you don’t get it now, you’ll never get it.” Back then, the problem often was the student if a concept was confusing and not acquired.

By Year 4 of plummeting math grades but passing everything else comfortably, I remember being in a lesson on proving theorems.

What the heck was a theorem and why were we proving them? And if they’re unproven, why are they on the syllabus? What happens once you’ve proven them? Fireworks? World peace? How is this worth the hour and however many minutes of my life in value?

I simply became a polite silent student body in a seat.

The learning moment of all this?

Math is such an integral part and basis of existence. Pivotal even. But some appointed devotees and stewards were doing an awful job of guiding and inspiring next-generation awe.

Mathematics is a building block for science. A common thread to all other disciplines and mega beneficial. The problem was after years of inadequate instruction by qualified teachers, I couldn’t care less.

No point or purpose.

And I was not alone.

I held no desire to become an accountant, statistician, or astrophysicist. I just wanted to be done with secondary school; its endless assignments, rules, and restrictions, getting to the next part of life I hoped was more exciting.

The real test is in the correct application of a concept, right?

Arithmetic. Statistical analysis. Mathematical logic. Is it possible that I could share end-of-year math failures with successive generations of world leaders and governments?

The real test is in the correct application of a concept, right?

Am I saying that all the world’s crises can be easily rectified mathematically?

Human beings and societal issues are complex, evolving varying levels of specificity by the minute. But the more support resources the better I say.

Math could help. But I hated math.

The other students who made fun of you for not knowing the answer. Being asked by the teacher to stand at the board to work out a problem under the glare of a thousand eyes. Condescending snickering. Not understanding how to do an operation correctly and having red crosses and lines all through your work from the teacher. Made to feel dumb because maybe everyone else got it but you. Timed exercises. Pressure. Gotta get it right AND do it fast. No one actually explaining how to do mental math. Having brain drain. Having attention spans that wanted to wander for a few minutes at 11-years-old for crying out loud. Having teachers who only knew how to teach one way and didn’t make it fun. Or clear. Or practical. Just learn it or die trying.

My saving grace was a support tutor in college who knew how to explain things really well in bite-sized chunks. Who could troubleshoot where you were having difficulty and modify an approach to suit you.

By the time I was in university, I’d joined an extracurricular group that made mathematics an ever-intriguing dynamo ride. After years of sanctioned public education maths abuse, now I couldn’t get enough of it. I sailed through precalculus. I wasn’t hesitant anymore. I was seeing correlations. Convergence. Constants. Clarity.

Why were the earth’s natural resources being depleted at breakneck speed by a western so-called developed country majority? If half of all marriages ended in divorce, how come sustained research and resources weren’t being directed at exponential rates for resolution if it mattered at all? Since the hole in the ozone layer held catastrophic impact, why weren’t stringent regulations and statutes enforced based on the data to prevent accelerated degradation of the problem?

It wasn’t until my mid-twenties that I mastered the principles of mental math, understanding that mathematics wasn’t rigid like the methodology framework I'd been taught. There was often more than one correct answer to a question.

It wasn’t until after an undergraduate degree that I gleaned equations were applicable in life dilemmas. And inverse proportion could increase what I wanted in life while decreasing the undesirables if applied correctly.

It wasn’t until as a substitute teacher in my thirties that I even thought to ask a math teacher the purpose of log tables, completing logarithms, sines, cosines, and tangents. Exercises my classmates and I finished without question during school.

We live in a proper imperfect world. Sometimes significant, helpful things aren’t shown in the best light for everyone. Doesn’t mean the theatre control room should remain forever out of reach. Or that we can’t move from where we’re sitting/standing/squashed behind someone with a big ol' head making it impossible to see anything.

The point is, in becoming an adult, you get to have a whole new perspective on everything.

Remember fantasizing as a kid about growing up and no one telling you what to do all the time? It may not have worked out exactly how you pictured it, but this…this part is a ‘you’ show.

Review it all again, from musical instruments to laboratory research. Art history to ancient civilizations. Geography to jurisprudence. Find the threads that fascinate you and follow them. See where they lead. No textbooks, timetables, or teachers breathing down your neck (unless you wanna.) You just might find something that changes your whole perspective on life. Bridges a divide. Helps heal a trauma. Let's you find your voice. Grants new insight or direction. Expands horizons.

Or are you willing to ignore such an opportunity on the chance that it’s not such a big deal after all?

Probably could sail through life none the wiser.

But if you’re the teensiest bit curious, throw some variables, potentials, and probabilities my way. I wouldn’t mind taking a stab at the math for that and definitely would not die trying. Because I’m willing to bet heavens to Betsy that my acquired maths mojo woohoo is a game-changer and the problem-solving dilemma none of my old maths teachers would ever be able to figure out.

A heartfelt thank you for taking the time to read my story. It is so very appreciated! You are more than welcome to read more of my work here.

If you would like to demonstrate support of me or any of the Vocal Creators, please like and share our work. It encourages us to keep doing what we love doing.

And just in case you were wondering, tips from all written pieces go direct deposit into my bank account (not through Vocal) and are valued highly, irrespective of the amount, but only if you can manage them. The joy a writer receives from being tipped is having feelings of acknowledgment and validation. "My written voice resonated with someone!" That is what it means for me and many others. I am just as joyous when you share my work!

I welcome your questions, comments, and feedback @thedaniwriter