by Austin Sharrett 11 months ago in Nature
Report Story 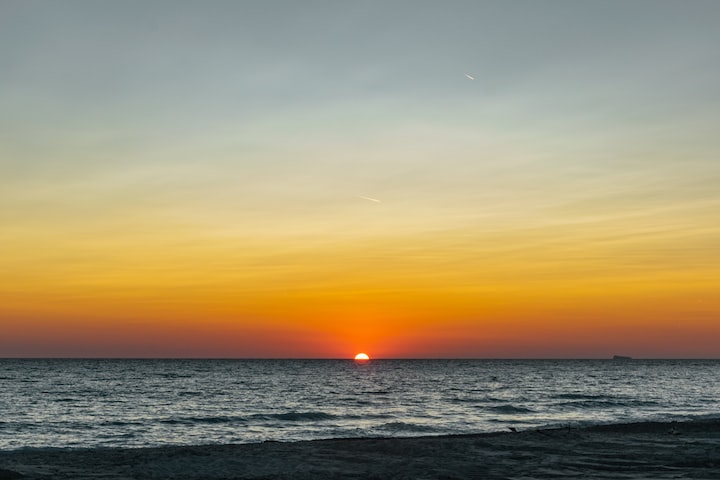 Photo by Dominik Dancs on Unsplash

Earth used to have three main colors: blue, green, and white. Vast, massive bodies of water blanket her celestial body. Rolling hills and mountains riddled with vibrant, green trees extended outward and upward from her skin. White, puffy clouds surrounding her, granting her a veil of mystery. At least that is what my grandmother always told me. Looking over The Horizon, these statements are hard to grasp. A black sky, covering a planet that could be confused for Mars if it were not for the brown sludge enveloping 50% of the blood red land. Looking upon Earth now is like looking at a ravaged carcass, depleted of its resources by vultures. Our forefathers tell us, the newer generation, that they “escaped” Earth and saved as many citizens as they could. That Earth’s demise was inevitable, and there was nothing that could be done. That might be harder to believe than my grandmother’s stories.

Walking away from one of the many portholes aboard The Horizon, I start walking towards my class. I try to make a habit of gazing upon Earth every day before class, to remember all the things my grandmother taught me when she was alive. Sometimes if I look long enough, I end up seeing spots of green. That could just be from straining my eyes, though. Clutching my locket, I walk toward the entrance when I hear a slight towards my family name from one of the guards.

“There goes one of the crazy Corwin’s”, said in a faint whisper: a sentiment not unfamiliar to our family.

I hold the locket tighter, forcing a faint heart-shaped imprint on my hand as I sit down. My mother also says Marina was crazy, but I think it is said more to protect her image than anything else. Onboard The Horizon, where everyone wears the same clothing, differences in beliefs are often frowned upon. Another feature that contributes to me being a target for harassment is my different appearance. Blond hair and blue eyes are a rare combination on this floating hunk of metal we call home. The only other people with this trait were my mother, my late grandmother, and my late father. Now it’s just me, as Jenny, or Jane Corwin, dyes her hair just about every week and wears color changing contacts.

“Jeda. Your mother’s an astronaut. You should be able to answer this for us.”

“Honestly? I wasn’t even paying attention.” The more the class laughed, the angrier Ms. Cavendish got. Her face might have turned the color of Earth, as this is a frequent occurrence.

“Jeda! Report to the brig for your punishment. Insubordination is unacceptable.”

“Sir yes sir!” in full salute with the added stomp left my mouth faster than the guards could escort me out of the premises.

As Jack and Reggie, the two guards for this classroom, hoist me up, I see her shaking her head. I never know if it’s in disappointment or pity. Maybe I’ll never know.

Being carried to prison happens a bit too often with me. What doesn’t happen often though is the mad rush of personnel to the left of me, in emergency formation. Running without reason is a crime punishable by club swings at your legs, so it must be serious. I do not have time to investigate, as currently I am being carried off to prison. Approaching the holding area, a good friend of mine appears. “Hey Jedi. Back here again?”

I thought Hanzel was scary at first, since he is in prison for life, but slowly talking to him made me realize there is always more than one perspective. He’s taught me a lot about life. Kind of like a father to me.

“Missed you too Candy.”

Candice is sweet, but sometimes her job gets very stressful. I like to think I make it easier by being compliant with her around.

“Your mother is going to be mad at you when she gets back today. Why do you keep doing this to her?”

That question hurt more than being beaten in the legs with clubs. And I really didn’t know how to answer it, either.

Was interrupted by an unnerving blaring. Candice was about to put the cuffs on me, the guards were walking away, Han perked up from laying down, and it felt like time had stopped. Over the intercom, I heard something I wish I hadn’t heard.

2113 is a failed docking. Gate 3 is on the opposite side of The Horizon. The phonetic alphabet is used for emergency services, so this situation calls for repairs, fire control, medical, and decontamination. It just so happened that my mother comes back around this time after her trips back down to Earth. She doesn’t tell me what she does, but she has also never said her work was dangerous. I must know if she’s okay. I just have to. Trying not to think about how many crimes I’ve just committed, I focus on not running in to people in front of me.

Passing by the classroom, two people exchanging money for something in a bag, dorms, more dorms, almost slamming my face into a door that just opened, and I see a clear path to Gate 3. Just a few more unsuspecting people in front of me. Ignoring the large number of footsteps behind me, I squeeze passed the crowd. The moment I lock eyes with my mother, being rolled off on a medical bed, escorted by yellow suited men, is the same moment I get clubbed in the head. The last thing I see before I black out is some rope-like thing wrapped around her bloody arm. And it was... green.

Waking up in a room you’ve never seen with people you’ve never met and a searing pain you’ve never felt before can be a little jarring. This is especially the case when you’ve just resisted arrest. The character with the massive veins bulging out of his head is Seargeant Major Justice. Personally, I don’t believe that is his real name.

“Running onboard, resisting arrest, endangering civilians, entering a contaminated zone without proper equipment, entering a restricted area, insubordination, and attacking an officer in just 10 minutes. You look like you want to say something, Jeda. Go ahead, I’ll wait.”

“I don’t remember doing half of these.”

“And I don’t remember asking you *if* you did them.”

At this point, I don’t really care. I just want to see Jenny. I have too many questions and not enough people willing to answer them.

“The reason you’re here though, is not because of that list. You saw something you weren’t supposed to. And now you’re at the mercy of The Establishment. One of them will be in to explain what happens next.”

The Establishment carries out the highest forms of punishment. I hoped I would have never met them. Now this is the point where I start being scared. For me, and for my mother. Once Major left, I had a lot to think about; like what did I see that I wasn’t supposed to see, is my locket still around my chest, do I have a concussion, things of this nature. I reached for my locket to find it was still there, which is incredibly lucky considering I think I hit the floor quite hard. As soon as I open it up, the picture of my grandmother falls out to reveal a four-leaf clover encased in resin. Never have I seen this before, nor would I ever think to remove my only remaining picture of my grandmother to see what’s underneath. I was so mesmerized by it, adding to the list of questions. One of those questions was answered by the person to the right of me.

“That one’s from Earth ya know.”

His statement was said with such certainty, but it could not be true. Everything our program has told us proves that to be incorrect. As I turn to Kano, I get a shot of adrenaline straight through my body, and then chills. The grin on his face was the type of grin that would make babies cry.

“You’re lucky. You get to be one of the few people who will know the truth. Here’s what’s going to happen. I’m going to tell you something you won’t believe at first, everything’s going to click, and I’m going to get to see your precious face when you realize you’ve been lied to all your life. How does that sound.”

After he told me that, I could barely think. Maybe because of the concussion, or maybe because my mind was completely flooded. I also had a hard time breathing for some reason. As I was about to muster a response, he started talking again.

“Earth was never a dying planet. We destroyed it, tore it apart. Why? For control.

“What better way to control a population by telling your citizens that you saved them from imminent doom, breeding a new generation of children programmed to believe one narrative? Now that you’ve done that little stunt, I can get rid of you and your mother in the same hour. Her job was to destroy the species that were pesky enough to flourish in a toxic wasteland; everything your grandmother was against. Man, what a complicated family.”

At that point my heart sank, and it felt like it broke upon landing. I couldn’t say anything without crying. So much information damaging information processing in my head, with little time to do so, and now I’m going to die? Everything happened so fast.

“I’m taking you to your mother now. Then you’re going to be jettisoned. Just remember how generous I was today. You’re going to get a whole minute with Jenny.”

Every step I took, I got angrier and angrier. We had the technology to correct are past mistakes, and we decided instead to destroy such a beautiful body for the sole purpose of better controlling a waring and disobedient population. And my mother helped them do it. Seeing her in front of me though, on that bed with tubes hooked up to her, completely broke me. All the hate I might’ve had for her washed away, and I just felt so empty. In our minute together, she just hugged me. As I was being pulled away, she whispered eight numbers to me. 0-6-2-9-2-0-2-1. It was so strange to me at first. Why would 8 numbers be the last thing she said to me? And then I saw it.

The security that was escorting me had no reason to apprehend me normally. I was completely dejected, and there was nowhere to run. But right as I am marching to my death, something to the right of me catches my eye. A pod just docked. I might not pay attention in school, but I always paid close attention when Han told me something. Our conversations covered all kinds of things, including a way to get off this ship. Why would I need that information at age 16? At that time, I didn’t know. But what I did know now was I had 4 seconds before that door closed, that I was about to be jettisoned into space anyway, and that I was the luckiest person on The Horizon right now. My grandmother always told me that Earth was three colors: Green, Blue, and White. She also told me that we, just like all life on Earth, are resilient, and adaptive. If I was going to die, I don’t want to die like this, so I ran. Hard.