I have a date with the sea

The day has entered the volcano, I went to the beach, on a date with the sea. 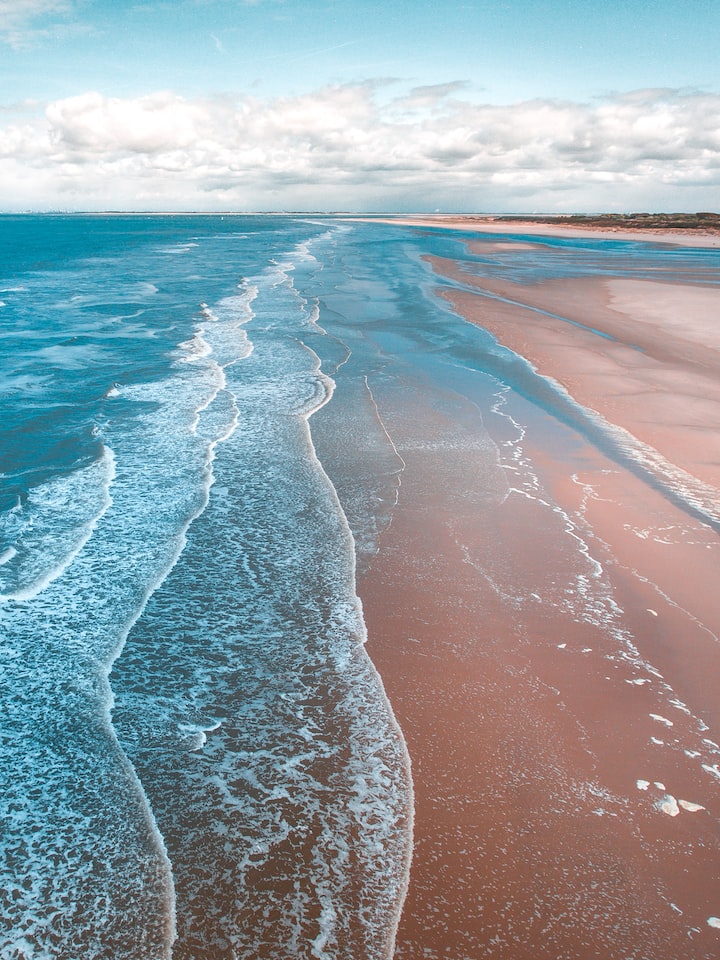 Photo by Kees Streefkerk on Unsplash

The day has entered the volcano, I went to the beach, on a date with the sea.

The afternoon sun gave itself unreservedly to the sea. A small wave, rubbing the sun, like a young girl's dancing skirt, the crystal foam.

I forgot to run on the beach, and let the sea water splash my pants feet. The seawater gently diffused over my feet, making me instantly forget all the heat.

I stopped and looked at the sea. The seawater at the shallow end was a light yellow color of sand, a warm feeling was born. The deeper the place is, the lighter the sky blue, the deeper the blue, the more distant, there is an indescribable depth. I slowly opened my arms and felt the salty sea breeze slipping through my fingers. The sea is so vast that it appears how small and insignificant one's sorrow and happiness are. At that moment, abandoning all the noise and bustle of the big city, seeking a deep inner peace. Where the sea meets the sky, it seems to be able to mermaid whispering chanting, which is so mysterious. I sat down gently and waited for the seawater to come up so that it could kiss every inch of my skin. The song of the waves washed over my mind so that I could not tell which is a dream, and which is reality. Another wave hit, I hastily reached out, holding up a cool, but can not catch a trace of the sea dream, but the depth of the sea, but long through my fingertips, seeped into my blood, straight to the depths of my soul.

Sea birds cried, I seemed to wake up from a big dream. The seawater had already soaked my pants. The sun shone straight through the surface of the sea, shining on the sand at the bottom of the sea, casting the ripples of the sea, forming a dream-like light and shadow. I gently inserted my hand into the sand and then gently withdrew it. Instantly, I turned up the fine little sand in the seawater like a wisp of smoke, and then, quickly, as if dissolved in the seawater, disappeared. I again thrust into the sand and again turned up. This time, my movements were a little rougher, and the sand I stirred up spread out like a fat sea of bubbles, or like a miniature version of the mushroom cloud created by a nuclear bomb explosion. It rippled away just as quickly until it settled back down to the bottom of the water.

Listening to the sound of the sea, I happened to look up, ah, the clouds at the junction of the sea and sky, seem to float down from the sky, floating to the sea.

Sitting in the sea for a long time, I sat in the place and then sunk into a shallow pit. I simply twisted my body, so that they sink deeper, and then buried themselves, gradually in their legs piled up a small mountain. It was only when my legs went numb that I had to get up and move around. The moment I got up, I suddenly felt like a zombie, crawling out of the earth, on second thought, it seems unlucky to think like that, so I imagined myself as ginseng that had lived for a thousand years, and now became a spirit, popped out of the ground.

I quietly look at the sea and let the summer sea breeze take away all the unhappiness. A few boys waved their nets and raked their nets, shouting after a school of small blackfish. Even though I thought of a hundred texts about summer, they were not as good as the breeze and the waves at this moment. It's a pity that I am not a poet, otherwise I would have written a five-word poem to praise the appearance of the sea. This is the moment to say goodbye to the city lights and all the chatter and trivial routine, and enjoy the date with the sea.

However, I still have to go back to the noisy world, but in my heart, I have already left a peaceful and distant sea, it is enough. I reminded myself, do not forget, you once on a beautiful summer day, went on a date with the sea.