by TJ Sage 3 months ago in Climate

A direct result of climate change 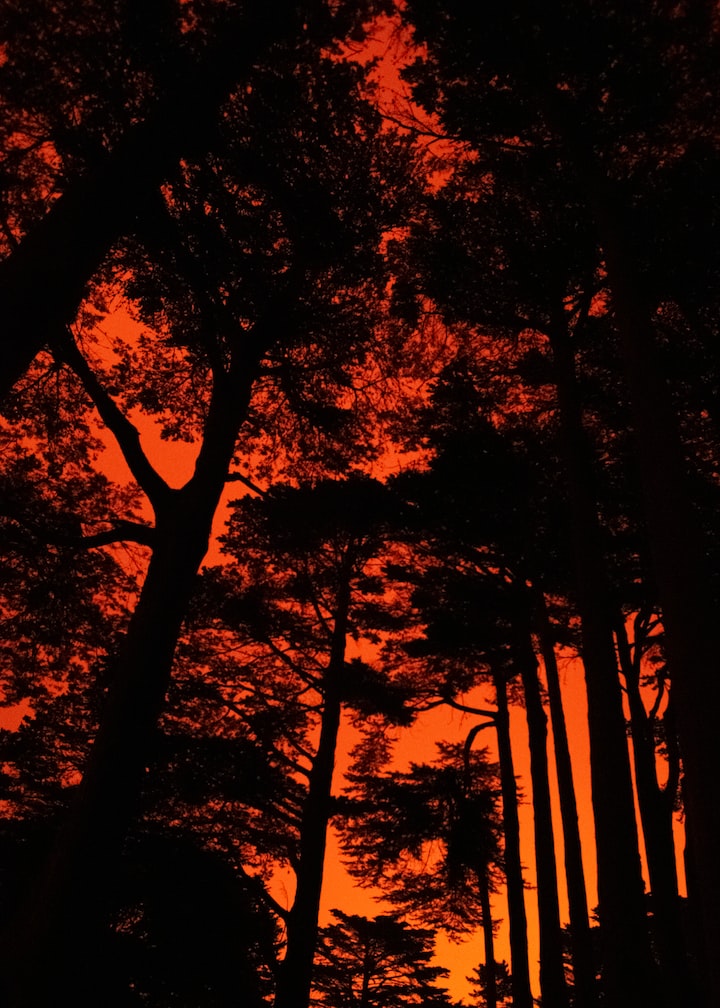 “We had children running in off the playground saying branches were on fire.” - Abbie Davis, teacher

“We have a guy calling, his wife’s in surgery and the hospital’s on fire.” - dispatcher

“We don’t have anybody to come and help you.” - Beth Bowersox, 911 Cal Fire dispatcher

When I moved to California, I didn’t realize I was moving to the literal hotbed of the United States. I moved to the North Bay, aka Wine Country, during the summer of 2018 in order to get out of the frozen tundra of my home state of Montana. Seriously, you can expect snow 9 out of 12 months a year up there, and I was apparently not genetically predispositioned to handle it.

After 22 harsh winters and some hateful seasonal depression, I decided it was time to finally get OUT. College decided where I went, as I still needed to complete my senior year. I had a very specific list of criteria, and one university in Northern California met them all - so off to Cali I went, only three months after I decided to move.

I hadn’t done any research on the fire season behaviors of the state - I was too excited to live in a climate that didn’t see snow to think it all the way through. However, after I had gotten here and started work in a restaurant in Sonoma, I started hearing all sorts of stories about evacuations of the previous year to escape the 2017 Tubbs fire. Hearing those stories weren’t scary, so much as exciting! Montana has fire seasons, but you never really hear about evacuations, you just have to endure the smoke for a couple weeks and come mid-September it all freezes and it’s over. I also tend to have the mindset that “that’ll never happen to me,” so I didn’t grasp the reality of a California fire season. Yet.

I remember waking up for school one day during that Fall Semester in 2018, and saw a text from my dad asking how far away I was from Paradise, CA, because there was a fire. I didn’t think too much about it, as I lived over 150 miles away, so I reassured my dad and left for school. I remember that the sky was clear when I went in at about 9am, and when I came out at noon, it was orange. As if it were 7pm and the sun was going down, casting a golden glow on the world - except it wasn’t a glow, it was a haze and you couldn’t tell where the sun even was.

I’d never experience smoke like that. Over the next few days (or weeks), I pulled my sweatshirt over my face while walking outside anywhere, classes were cancelled due to air quality, and they were handing out masks in the student center and various other buildings on campus (such an alien thing to wear on your face at the time, I never would’ve thought two years later it would become so normal).

After that fire was 100% contained, I thought, “Ok, cool, life can go back to normal!” and simply went on with my life. I went home to the frozen tundra for Christmas the next month, where you walk outside and can’t take a deep breath because the air is so cold you’ll start coughing. If there’s a breeze while you walk to your car, your eyes will start watering and the tears freeze to your face! The following spring I graduated from college and that summer I got a job in and moved to Napa, electing to stay in California for the foreseeable future. I did not take into consideration that such a horrendous fire season would be a regular occurrence (join the club, right?).

Now I’ve endured three, up close and personal fire seasons with the Glass Fire, the Napa Lightning Complex fires, etc. During fire season I’ve learned to pack a bag, keep water in my car, and take my dog everywhere I go just in case I need to get out, fast. I follow the news and keep track of where the fires around me are and which way I would go if told to evacuate. I thought I understood the gravity of the situation.

Then I watched Fire in Paradise on Netflix, and, unless I get trapped by a wildfire in the future, I know I will never truly understand the severity and desperation of a wildfire like the citizens of Paradise, CA.

I don’t think it’s possible to accurately imagine yourself in a deadly situation unless you’ve been in one. The news only covers so much of the events of people trying to escape with their lives, and it certainly doesn’t portray an accurate level of emotion. Fire In Paradise adequately encapsulates the terror these people experienced as they sat, stuck in traffic as sitting ducks, watching massive flames come closer and closer. What do you do in that situation, when there is no avenue of escape? I tried to put myself in their shoes and failed as I sat on my comfortable couch in my living room, my wide eyes glued to my TV for the whole documentary.

Though the entire film is remarkable, a few moments and accounts from various witnesses really stood out for me. Footage showed a police officer running down the overcrowded road screaming “OUT OF YOUR CARS! EVACUATE ON FOOT! EVACUATE ON FOOT! GET OUT OF YOUR CARS! OPTIMO PARKING LOT, OPTIMO PARKING LOT!” There was nowhere for these vehicles to go - the exit had just been blocked by the fire. The officer was trying desperately to direct people to their only hope for survival, which was a large parking lot where all they could do was lay down, wait out the fire, and pray they wouldn’t burn to death.

“We’re stuck here, all of us,” the officer said to a man in his car. Shock and fear was shown clearly on the driver’s face as he said, “Are we gonna be okay?” The officer didn’t have an answer.

“We hear a sheriff’s car come through over the loudspeaker. He says, ‘Prepare to abandon your vehicles, and proceed on foot.’ I was in utter disbelief,” said Dacia Williams, Paradise resident.

Another scenario portrayed was that of two teachers on a school bus full of children, trying to get out. The fire grew so quickly that there was no time for parents to pick up their kids from school, so they were loaded onto a bus for what turned out to be six hours. One of these teachers described how some of the kids were getting tired and going to sleep from inhaling too much smoke, so the bus driver used his shirt to make masks for them.

I tried to imagine the feeling of “deep hopelessness” as the teacher said they began to pray, not that they would get out safely, but that they would die of smoke inhalation instead of burning to death:

“It’s hard to say this out loud, but we-we prayed we would die of smoke inhalation. And that’s a hard prayer to make, as we held each other and held hands. And then we took a deep breath to refocus ourselves, and we got back to work.” - Mary Ludwig, teacher

“We stopped by a McDonald’s, and the McDonald’s caught on fire, and then you see another fire directly across the street” - Abbie Davis, teacher

I live right in the center of the city of Napa, where people tell you it’s safe. We tell ourselves, “There’s no way a fire would get all the way into the town center, we’re fine!” But the people of Paradise didn’t think their town would burn either. A fire rescue dispatcher recounted her disbelief as she answered a call about a fire in the middle of town:

The emotion of this film flowed off the screen and into me, I was genuinely terrified for these people. I was constantly reassuring myself that they made it out, otherwise how could they have done the interviews? Just like the fear I felt from my living room was incomparable to what they felt during the fire, the inadequacy was akin to the sorrow I felt for them as they recounted how they lost everything - from their houses, to their neighbors, to their entire town. The whole thing was just completely unimaginable.

This documentary, along with the devastating brush fires of Australia, are good reminders to not take anything for granted. The temperature of the planet is warming, and we are seeing the direct consequences of our actions. I think the silver lining of events like this is that they’re good pushes to get us to reduce our waste and carbon footprints, and know that even small changes have big impacts.

The first step is to raise awareness and get people to understand that yes, we can make a difference, and yes, we need to make that difference. Global warming is real, and if we don’t do something to save the Earth now, pretty soon there won’t be an Earth to save anymore.

With that in mind, here are some businesses that can make it a little easier to have a little less impact on our precious planet:

Save Lands sells clothing, accessories, and more that are all eco-friendly, cruelty-free, and all around good for the Earth and her inhabitants. But their main focus is that every purchase plants 12 new trees! They have a goal to plant 10,000,000 trees and every purchase helps, plus you can plant extra trees for $1 each.

Pela sells electronics accessories like phone cases, AirPod cases, and more, and their products are entirely compostable. Their mission is to reduce the production of plastics and materials that do not break down and will outlive us by hundreds of years - and who doesn’t have a phone case in this day and age?

I had to mention this one because they are based in my hometown of Bozeman, Montana, and I am a total dog-lover. This one is geared toward anyone who has a four-legged, tail-wagging best friend. West Paw creates dog toys that are durable and able to withstand your dog’s teeth for much longer than the average tennis ball - and they are eco-friendly!

“Our work is to use our business as a force for good to help future generations enjoy a healthy planet, productive work, and strong communities.” - Spencer Williams, CEO, President, & Dog's Best Friend

With a little more mindfulness about how we live our lives, which products we throw away and how much waste we produce, together we can make an impact to reduce our impact. We can help to mitigate the harsh climates that produce devastating fire seasons, hurricanes, and storms and leave a better world for the next generation. All it takes is a little effort and determination.

Not-your-average wannabe writer and author who's a sucker for a good story. New short stories every week!

See all posts by TJ Sage →