A Look At This Weekends Coming Solar Storm

by Jason Ray Morton 6 months ago in Science
Report Story 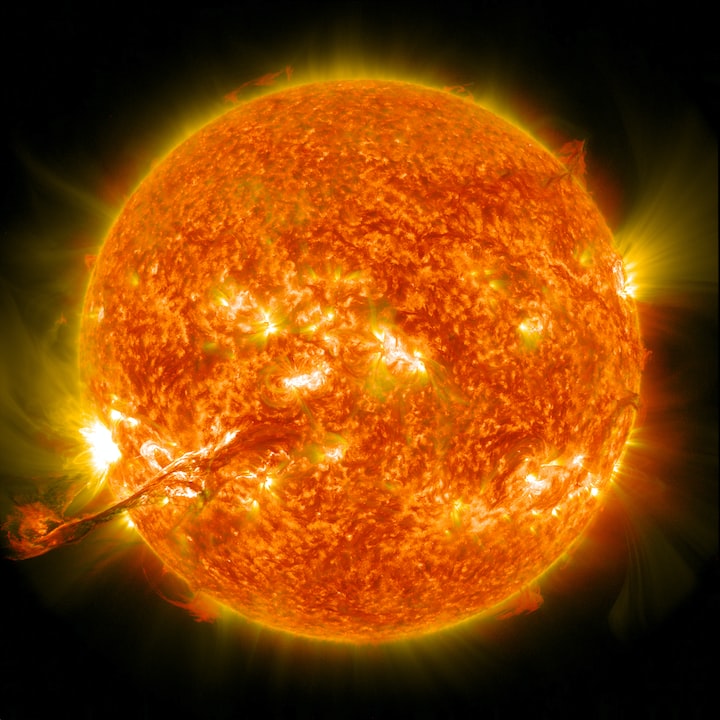 Scientists believe another solar flare from the sun could reach our planet over this weekend. Experts warn the coronal mass injection could have the potential to cause power disruptions on earth. The solar blast, also referred to as a CME, was first noticed on November 24, just two days ago. Flares like these are a common occurrence. Not all of them travel toward the earth. But, when they do, they have the power to be disruptive.

According to SpaceWeather.com, the coming solar flares might produce minor geomagnetic disruptions in the planet's magnetosphere. The magnetosphere is the region of space where the magnetic field is located.

A consistent stream of plasma speeds away from the sun's corona, forming solar winds that head to earth. The plasma is made of free-flowing electrons and protons. Streams can escape the sun's corona, which may reach as high a temperature as 1.1 million degrees celsius. When this happens, and solar storms or solar wind emissions occur, it is assumed to be because of coronal holes.

Much like hurricanes, tornadoes, and tropical storms, solar storms are classified as G1 or minor storms up to G5 or extreme level storms. Minor storms can cause problems with power grid oscillations and interrupt satellite operations on the lower end of the spectrum of problems. Weak storms in polar areas can cause increased auroras by forcing atoms and molecules to reach new levels of energy. Extreme storms, however, are quite capable of creating widespread power blackouts and communications failures.

Over the last century, there have been multiple solar flares that caused breakdowns in power grids and telegraph control rooms, notably in the UK and US. As a result of the disruptions, the Space Weather Prediction Center in Colorado issues daily predictions and warnings to those authorities concerned about the effects of solar storm activity. There have also been large programs that launched multinational satellites and orbiters to observe solar flares and activities.

What An Intense Solar Storm Can Do

The current solar flare that is traveling toward earth is believed to be an X1 solar flare. The increase in the number of X-class solar flares is believed to be part of the sun's normal 11-year solar cycle, during which the activity on the sun ramps up to a solar maximum. The current cycle is not expected to peak until somewhere between 2023 and 2026 when the sun will have a sunspot range of 95 to 130 spots.

So this storm that is coming has the capacity to disruptions in our satellites and some communications. It can cause health concerns for astronauts and persons flying in high altitudes.

Bigger Concerns would be due to the effect on the planet. Considering that the temperatures of solar storms are drastic and the radiation they carry is just beginning to be understood, there is the belief that a solar flare may damage the ozone layer. Satellite data obtained by Syfy indicated that a solar flare in the year 2000 destroyed approximately 1 percent of our ozone layer, mostly in the extreme upper atmosphere.

Flares can cause what's called a geomagnetic storm. This is the result of a disturbance in the Earth's magnetosphere that occurs when there is an exchange of energy from the solar wind into the space environment that surrounds the earth. They happen because of differences in the solar wind that produces major changes in the currents, plasmas, and fields in the magnetosphere. The solar wind conditions needed to create the storms are sustained, high-speed winds, lasting many hours.

During the storms, the changes in the ionosphere and the energetic particles that leak into the ionosphere add energy in the form of heat that can increase density and energy distribution in the upper atmosphere. This effect causes extra drag on satellites in low orbit. The path of radio signals can be modified due to the storms, errors in the global positioning systems are likely. While the storms may create a beautiful aurora, they can also create harmful geomagnetic induced currents in the power grid and pipelines.

With the coming class X solar flare that is expected to reach earth in the next 24 hours, it's unlikely that we'll notice much in the way of disruptions. With all of the satellites and orbiters that are constantly monitoring the sun's activities, we should know well ahead of time if a major solar storm or a G5 was to be coming. This would be the worst-case scenario, the kind of thing Roland Emerich's apocalypse movies are made of.

If you have stories to tell, are interested in writing or blogging, Vocal is currently running a special on memberships for new members. Membership also gives you the opportunity to compete for thousands of dollars in prizes. Clicking this link would give you access to the thousands of stories, benefits of the challenge opportunities, and if you join benefits me as well as it is an affiliate link through the Vocal + ambassador program. You may also click the link below.