Someone Take The Scissors Away From Me 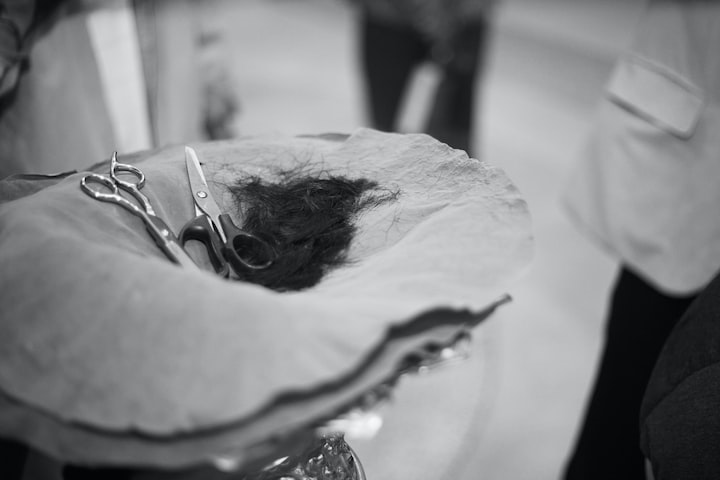 I’ve always been obsessed with changing my hair. I'm never happy with it for long. I’ve always felt my hair has been what helps define me. I look at it as a reflection of my personality. I’ve changed colours numerous times and I’m patiently waiting for the opportunity to go to the salon for the first time to have it properly coloured to red and pink. I’ve never really been bothered about the length of my hair though. When I was growing up, I had the bowl cut bob and all throughout my teen years, I was constantly changing it from long to shoulder length. I had always had my mum’s friend, who was a mobile hairdresser, come to the house and cut my hair the correct way. That was until one day I decided to act on an impulsive decision to try and cut my hair myself.

I bet you are dying to see how that went right? Well first, let me set the scene. I’m 16 years of age and I just broke up with the boy I was seeing. I was devastated, thinking I was never going to find love again and anticipating the end of the world, as 16-year-olds do. I was really struggling with my identity and who I was going to be. So, I’m held up in my room ignoring the world, crying to Blink-182, when my eye catches the scissors on the side. I grabbed them with little to no thought, propped my mirror up against the wall and started to cut.

It still doesn’t feel right. So, I go in again.

Being 16, I thought I'd given myself an edgy and “cool” look when really it was a train wreck.

Even though it may have been a split-second, impulsive decision that I made in a fury of anger, it helped me. It helped me realise my love for hairstyling even if it did look absolutely awful. However, this wasn’t the only time I decided to do this to myself. When I was 18 years old, similar circumstances arose. I broke up with my boyfriend and was feeling like I needed a change. I’d just coloured it red but it wasn’t enough for me. I didn’t feel like me still. The hair had to go. This time though, I wasn’t going to just hack away at my hair in a blind fury. No, this time I was going to try and actually make it look good.

Although it clearly wasn’t a salon quality hair cut (I knew it never would be) I was proud of myself. It actually looked half decent. It was a whole lot better than what I had done to myself when I was 16. I bet you read this and thought “well, if you like hair so much then why don’t you train to become a hairdresser?” I tried. For a few weeks, I was enrolled and attending a hair and beauty college trying to learn how to do hair. It wasn’t for me. I realised that I don’t like styling other people’s hair, only my own. I feel it’s better this way. If I mess up, I’m the one who has to live with it. The pressure of trying to do someone else’s hair and doing every little thing perfectly really wasn’t for me. Now, I sit at home watching the youtuber Brad Mondo, eagerly awaiting the day I make another impulsive decision to cut away at my hair again. Hopefully next time it will be better than the last.

I like to write about true crime and do small investigations. I also write fiction sometimes

More stories from Shauna Mullen and writers in Confessions and other communities.