What is Orient Metal: Takasago Army by Chthonic

by Rui Alves 10 months ago in album reviews
Report Story 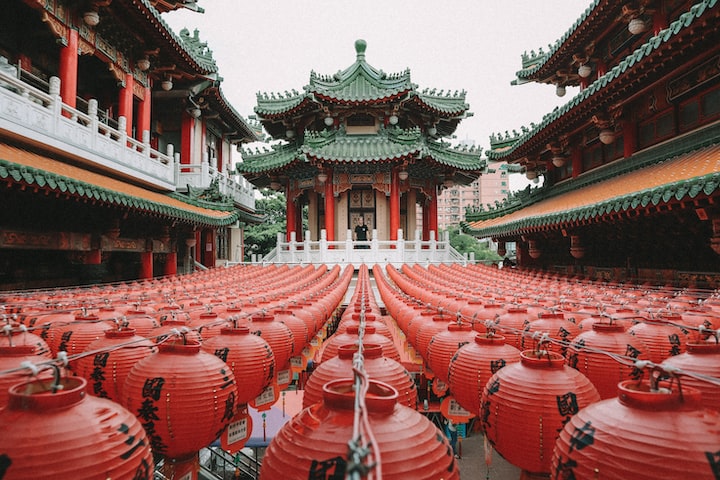 Photo by Dave Weatherall on Unsplash

Two days ago, 18 January 2021, CHTHONIC shared, on YouTube, the video hereafter that captures scenes from the Chingshan King Pilgrimage and the Longshan Temple.

The recent footage was released digitally worldwide and represents Taiwan’s success in the fight against COVID-19. Taiwan went for more than 200 days without a locally transmitted Covid-19 case in 2020.

We had to forsaken Easter, Christmas, and Carnaval is next in line. Who should we blame for this becomes just a rhetorical question.

But for now, let us forget about COVID-19 and watch a video from December 2020 that seems from a time before December 2019 and the COVID-19 pandemic. My review of Takasago Army by Chthonic follows.

CHTHONIC's career has made them one of the most innovative and socially committed bands in the current metal scene, reconfiguring the Nordic Metal influences of the beginning of their career to create a unique image and sound.

They aim at fusing musical elements from both the East and the West, breaking through borders still scarcely explored and taking Asian traditions as a starting point for their unique approach to Orient Metal.

At Hammerfest, Doris Yeh, bassist of CHTHONIC, during an interview, clarified that the “Takasago Army” was composed of troops from Taiwan who fought alongside the Japanese during World War II between 1940 and 1944.

Takasago soldiers were descendants of brave and unyielding people from Taiwan's mountains with a strong warrior tradition. They dazzled enemies by their tenacity, cunning, and skill on the battlefield and were the most respected and feared combat unit of the Japanese Imperial Army.

Hence, the album becomes CHTHONIC’s hymn to the Takasago heroes.

Having introduced the idea underlying the creative process, I will now focus specifically on the album.

“The Island” is the perfect introduction to Takasago Army. Purely instrumental and using a profusion of traditional instruments. The theme thrives with dramatic tension and an epic tone.

Of note is the track's musical development, which evolves from an intimate tone to an orchestral record. Also important is the use of Erhu, the traditional two-string violin, the quintessential Taiwanese opera instrument.

Concerning “Legacy Of The Seediq,” note how “Seediq” comes from the Atavalic dialect spoken in the mountains of Northern Taiwan and directly references Takasago fallen heroes.

Musically, the theme is powerful and in line with extreme metal. The increasing density of sound waves emerges directly from the percussion hammering uninterruptedly. Traditional motifs are present, but they don't stand out, serving as a melodic complement for the harsh and piercing growls.

“Takao” was the first single extracted from “Takasago Army” and grows to become one of the most breathtaking moments of the album, clearly defining the type of sound that CHTHONIC aims to inscribe in the “Orient Metal” paradigm.

“Takao” is an elegy about Takasago troops' departure from Takao's port to join the Imperial Japanese Army.

The track opens with a discreet chorus, and the inaugural dialogue between the Erhu and the guitars expresses the fusion between oriental folklore and metal. The growls evolve between the squeaky squawk and the deepest snoring, alternating with the clean vocals in the native language.

When the Erhu gains prominence, the moment works as a dramatic interlude in the track's brutality. A particular reference to Yu Tien's participation, a renowned singer from Enka, in Taiwan, who deserved the following comment from Doris Yeh:

“Yu Tien’s voice gives the song its intense vibration and, also, expresses the multiple emotions, soldiers, at the time of departure. ”

Also noteworthy is the video of the theme, directed by Chuang Chih-wen.

“Oceanquake” is a theme that should work well live thanks to the fantastic Erhu dialogues. The intermittence between the rawest sound and the melodic parts also give the track greater dynamism.

“Southern Cross” opens with the smoothness of the flute, but the thunder of the drums and the guitar riffs quickly appear, with the duels of growls imposing themselves systematically.

There is still room for brief but intense guitar solos. In short, a fast track, but very conventional, with a well-defined chorus, but without the experimentalism and fusion that we find in other moments.

A phantasmagoria of keyboards and the dark pulsing of the drums mark the beginning of “Kaoru.”

When, finally, the voice emerges from the interior of the darkness in a tetrical whisper, the register is morbid and sepulchral. Then, the growls scale-up, and the guitars' sound mixes with the stray notes of a piano.

The melancholy tone of the Erhu is heard again. The track continues to precipitate frantically until the moment we hear the crystalline and fairy voice of the award-winning singer Tsiam Nga Bun (Chan Yia Wen).

“Broken Jade” is a straightforward theme, with simple riffs and quick bursts of percussion, where the contrasting note is in charge of the Erhu.

The band also used a sample with the voice of Hirohito / Emperor Shōwa during the radio speech, to the Japanese people, three days after the destruction of Nagasaki, in which he will never use the word “surrender,” opting for the expression “ceasefire” in conformity with precepts of Bushido.

The initial growls are typical of the most extreme metal, and the band seeks to fulfill that brutality design that they had projected for the album. The guitar and Erhu solos are present in this track and are the melodic note of a dark theme closing the circle started with “Seediq Bale” (2005).

The last track, “Quell The Souls In Sing Ling Temple,” takes up the theme of the album “Mirror of Retribution” (2009) based on the battle that took place in the Temple Xing Ling in Nantou, March 16, 1947, when only 40 members of the local militias fought to the death against 2,500 Chinese soldiers.

The memory of the militias’ achievements and martyrdom is celebrated through this epic and martial hymn. The growls are explored to the limit, and the unrestrained rhythm of the percussion accompanies the distortion of the guitars and the melody of the Erhu.

CHTHONIC excels in “Takasago Army,” not only for its impeccable execution and the originality of “Orient Metal.” But also for the fact that alongside the brutal sound and the demonic imagery, it pulsates the fiery urge for freedom expressed through the force of word and grounded in the persuasive and corrosive power of music.

It is also to be praised that the band understood that evolution is only possible through the knowledge and appreciation of tradition and history.