by Macy Brooklyn 2 months ago in celebrities
Report Story

A lost star succumbed to addiction 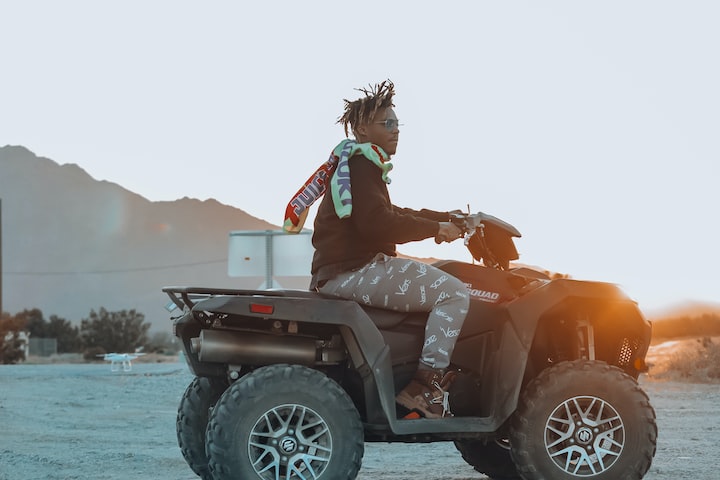 A young super talent, who reaches stardom overnight, a mini career of less than two years, and hundreds of releases that have catapulted him to the top of the world music charts, he is not shy about being a drug user, he says it over and over, the lyrics of his songs describe it accurately, no one He can help, he belongs in this world, I'm going to die young, that's how he crossed and it happened, in the prime of life, struggles with substance abuse and mental health eventually took his life. This is the story of Grad Anthony Higgins, better known as Juice WRLD, one of the most popular and influential artists of his generation.

In the early hours of December 8, 2019, Juice WRLD died of an overdose of oxycodone and codeine shortly after landing at Chicago's Midway Airport. Two years later, Grad remains one of the world's most popular music artists and, according to Spotify, is the third most-streamed artist in the US for 2021.

"Grad Anthony" was born in 1998 into a conservative family in Chicago and spent his entire childhood in "Homewood - Illinois." Joss' parents divorced when he was three years old, and because his mother was very religious and conservative, he was not allowed to listen to hip-hop music during his childhood days. however; The musician and Gus first met through video games where he listened to rock music in Tony Hawk's Pro Skater and Guitar Hero games and took a keen interest in it. At the age of four he learned to play the piano, later followed by guitar and trumpet lessons.

Juice's talent appeared long ago in kindergarten, his mother, Carmella Wallace, enrolled him in music lessons when he was six, and after his ability to memorise songs and pick up musical instruments appeared within days, teachers began telling her that her son had a talent.

During his freshman year in high school, he began to hone his musical talent as he developed an interest in rock and pop music after listening to bands such as "Black Sabbath", "Blink 182" and "Panic at the Disco".

"High school isn't easy for teenagers, but for Gus high school was where it all began."

During his sophomore year in high school, Joss started rap music and started considering it as a career option. He also started his addiction to drug abuse, initially releasing his music tracks using the online music streaming platform Soundcloud and then using the name "JuicetheKidd" for his initial recordings that he started in 2015 with a recording on his cell phone where he released his first song "Forever".

Later, he adopted the name "Juice WRLD" to give him global appeal. Juice quickly signed with the group "Internet Money" in the early stages of his career and his debut single "999" became a huge success.

The number "999" was not just the name of Joss' first tape, but the name 999, in contrast to the devil's number 666, with the aim of spreading positivity. Juice WRLD is an entire generation of teens and young adults hoping to make a positive impact on their lives and not just sing.

"Juice WRLD" was uniquely talented, both in his prolific production and in the harshness of his words which made his music go crazy at this record time. Almost everyone who met Joss recognised his huge potential from the beginning. J. Herbo, an American songwriter and rapper who is also an old friend of Joss says:

“The first time I heard his music, it was crazy.” After the fame “we had to remind him of how big his star is and how powerful he is.” “He was so humble, he didn't even use his strength, we used to say to him, 'Brother, do you really know who you are? You are Juice WRLD! "

Songwriter and producer Benny Blanco, who spotted Juice on Instagram and immediately set up a recording session with him in Los Angeles, recalls being stunned by his ability to compose a song on the spot. With the lyrics and the melody, he even brings the whole song in one take." "He did three more tracks and did three more hit songs to the same beat."

Juice recorded several songs in that one session with Blanco, and would have done the same with several other collaborators.

still perceptibly surprised. “It wasn't as if he was squawking with meaningless words, they made me feel something.”

Gus' main concern was to keep himself and his friends entertained, he wasn't trying to chase glory, he wasn't doing any of the things he was doing because he was famous, Blanco described him as "one of the purest people I've ever met".

Instead of spending money on things that artists and celebrities like like cars and jewelry, Gus treated himself like the kid he still was, aside from buying a home in the Los Angeles area, Gus would collect Yu-Gi-Oh cards, play old school games and buy Paintball guns and other childish objects.

“All he cared about were his friends and trying to have fun and enjoy the moment,” Lord says, “a good friend of mine.” He cared not about any superfluous things or anything but loved ones and friends, making music and having fun. He never had a car before, but he did. 10 Dirt bikes and four ATVs, just so he and his friends could go out and have fun together, he was just a kid in an adult form.

In 2017, his single "Lucid Dreams" was the first of his songs to enter the Billboard magazine chart, an emo-rap song that later turned into an elegy for love with over 780 million views on YouTube. And about 1.8 billion streams are streamed on Spotify.

The song helped him earn a $3 million deal with recording studio Interscope in 2018, which led to "Goodbye & Good Riddance", the first album released by Juice, and Lucid Dreams was one of the album's songs. The album sold around 39,000 units in its first week and was spotted at number 15 on Billboard magazine's chart, after which his fan base continued to grow rapidly, the rest being history.

The success of Joss's journey and ascension to the top was as lightning fast as it was unbelievable, and at the same time it was hard to believe that it would come to such a tragic end so quickly.

Macy Brooklyn is not accepting comments at the moment

More stories from Macy Brooklyn and writers in Beat and other communities.