The Beauty of French Cooking Music

by Jillian Spiridon 8 days ago in song reviews

How did this section on Pandora wind up being the zen music all of my friends and I needed? 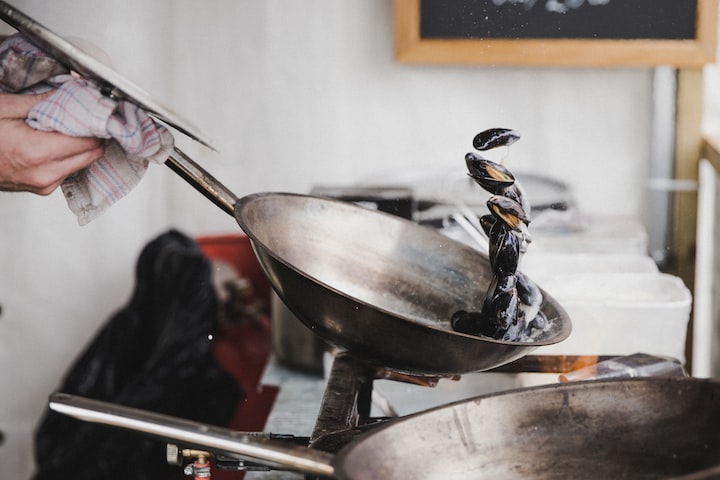 Photo by Margo Brodowicz on Unsplash

It's a chaotic world out there with noise and disturbances and all manner of stressors. Though 2020 taught us that we may be able to avoid traffic and long trips to the grocery store, there are some things that are just a part of being human. You have to find the will to get out of bed every morning. You have to shower, get dressed, eat—all the usual daily rituals. You have to deal with school or work or some combination of the two. Sure, a pandemic may enable us to work from home, but that doesn't mean we don't have to deal with the things that come with being an "average" human being living an "average" life.

And sometimes it sucks. Even though you know you're living a life some would kill to have, there are still struggles and disappointments and obstacles. Even just having to make money to ensure your comfortable lifestyle is a point of stress and concern. Don't even get started on things like debt. Or your social life. Or your family. There are too many variables, right?

Enter the right kind of music that you can turn on and escape the world for a while. Just close your eyes and you're there: a little winding road of cobblestones, sunlight spilling over small chairs and tables, a softly steaming latte beside a fresh croissant that looks golden and flaky and oh-so-inviting—an aesthetic and a mood that wraps you up in a welcome embrace.

May I introduce you to French Cooking Music?

Enter the year 2021, and everyone needs a little uplifting beat.

Before the beginning of 2021, I never had a Pandora account. I don't know why; it hadn't seemed the type of thing I needed. But then my friend kept mentioning to me a station on Pandora that was dedicated to...

"French Cooking Music?" I asked, dubious, while she nodded along.

Well. A few months later, and French Cooking Music has become my latest obsession. Now I feel like an enlightened soul that has to spread the news about the greatest creation known to mankind. Just what is it about this type of music that hits me in just the right spot?

Here's a quick taste of what you will hear on Pandora's French Cooking Music station:

Can we all agree that the music is sublime and jazzy? And those vocals. There's something there, isn't there? Can't put your finger on it?

It transports you to a realm far, far away.

My friend listens to French Cooking Music while she's working or when she's doing chores around the house. Me? I have started the habit of listening to it whenever I just need background noise while I'm writing. We've both discussed how the music seems to lift us from our static tasks and makes doing them feel more bearable.

If you listen to the French Cooking Music station for a while, you get accustomed to falling into the sumptuous voices and sounds that carry you away enough where you can imagine you're not stuck at your menial 9-to-5. Does that sound like too much of a magic spell? Well, maybe it does, but you have to try it to see for yourself!

What else appeals to us so much about French Cooking Music?

The music is comforting, like a kind word or smiles exchanged out of the blue.

Had a bad day? Do you just want to fall back into bed and curl into a ball? Turn on this music and try to let the stress melt away: you may just feel like you're being enveloped in a hug that's your own perfect safe zone. The lovely thing about French Cooking Music is that you don't have to be in the kitchen for it to work its appeal on you.

Personally, listening to this music helps me a lot with my anxiety. If my thoughts are rushing at a mile-a-minute and buzzing without ceasing, then I turn to this realm of music for some sort of peace. Closing my eyes and breathing out, I try to distance myself from the worry and just focus on the sounds washing over me.

Does that count as a kind of meditation? I don't know, but it works for me. Maybe it might help you too if you have trouble with anxious thoughts.

And here's another lovely preview of a song for your listening enjoyment:

While I would love to say this music if for everyone, though, I know tastes vary. What I find beautiful you may find atrocious or vice-versa. I do recommend listening through a few songs just to see if you jive with these kinds of sounds and vocals.

What more is there to love about French Cooking Music?

The sublime feel of the music remains a constant, no matter the song.

At this point, I've listened to Pandora's French Cooking Music station a good dozen times. It's that good. I'm no music connoisseur—in the sense that I'm not a musician by any means—but I like to think that I can hear something that's wonderful, even if I don't understand it from a musical theory perspective.

Vocals or not, the songs just really showcase a soundscape that is lovely to behold. While these songs may not be the earworms that some pop songs of today or yesteryear may be, you still may find yourself humming along to a song that you find gels with you more than the others. I don't think there are any "dull" songs I've heard via the French Cooking Music station, but—again—your ears may pick up on something different than mine do.

Me? I just love the music and how relaxed it makes me feel.

And it doesn't have to be "French."

I know, there are some people who can't listen to music that's in another language. And then, even with the vibes from French Cooking Music that may have varied languages (ranging from English to Spanish to Italian, just from what I've heard so far), you may just not like the vocals. That's fine.

After all, that's where instrumental music comes into play. For just an example, here's a piece from the 2009 Pixar film Up that falls perfectly in line with the vibes of "French Cooking Music" (at least enough to be included on Pandora's station). It's just a beautiful example of the variety you can find even in the French Cooking Music "genre."

Lest you think you're missing out if you don't use Pandora, there are also "ambiance" playlists that are in a similar vein to the French Cooking Music station. Though the music may remind you of the score from a movie like Ratatouille, you can't deny how inviting the music as a whole tends to be. You'll be able to close your eyes and imagine yourself away to a wonderful, beautiful day along the Seine...

Wanna be like Remy (from the aforementioned Ratatouille) when he's combining and tasting different flavors of food? Then just give French Cooking Music a whirl, no matter the means or the method.

You can also find a French Cooking Music playlist on Spotify (playlist included below):

A note: If playlists and stations don't do anything for you, I definitely recommend looking at background music playlists all over YouTube. You never know what you may find that you'll absolutely love to listen to whether you're working or just trying to distract the noise in your brain. These playlists can be really helpful in calming or "preparing" your mind.

Happy listening! I hope you find the music that is magic to your senses!

Did you enjoy this article? There's more over on my profile page. You can also find me on Twitter if you'd like to chat writing or follow any updates about new poems/stories/articles I've posted. Thank you for the support!