by Vince Coliam 11 months ago in literature

The beginning of an artist 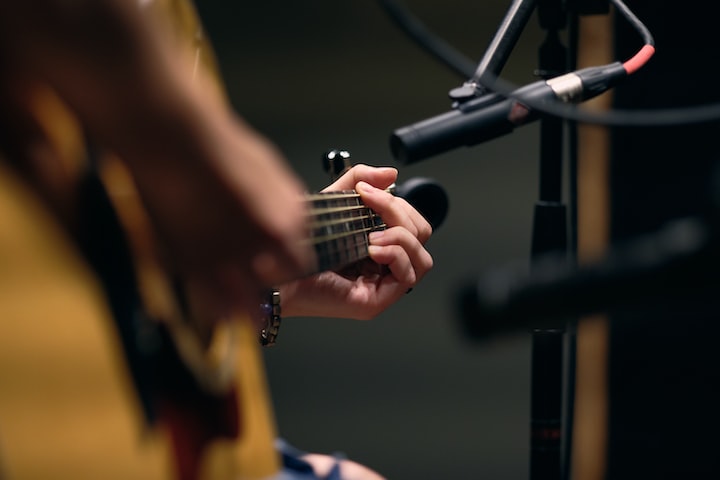 Photo by Joel Wyncott on Unsplash

"Dorian, that guitar is never going to get us out of here! You need to get a job! It's time to be a man and stop being so useless!"

The concept of a nine to five job was something that Dorian Brone knew he would never do. The thought itself was absolutely asinine. His ambitions were so much bigger than that; he knew that if he just kept at it that someday even she would be glad that he did. His girlfriend just didn't understand him. She thought that a minimum wage job was the solution to ending the poverty that they had been in for the last year.

Dorian and Lydia were both eighteen years old and came from the foster care system. Dorian had managed to successfully run away at the age of sixteen while Lydia had emancipated herself at seventeen. Life on the street had not been kind to either one of them, that is at least until they found each other. Lydia worked at a truck stop/diner and Dorian would occasionally play a gig on the weekend, but neither made enough money to provide any hope of a brighter future.

"You have played at every club in town and you still haven't been 'discovered.' Wake up Dorian! It's never gonna happen!"

Dorian continued to brood and pick at the guitar as if he couldn't even hear her. Tuning her out was the only way he knew of to cope with the constant belittling. It wasn't always like this, he thought. He remembered how great things were when they first met. The idea of going back to the way things were before, when he was completely alone in the world, terrified him more than simply enduring the abuse and hoping it gets better.

As Lydia headed off on foot to work, Dorian put down his guitar and began to write in a small black luxury notebook that he had bought with the small fee that he had earned from his last gig. He had been thinking of song lyrics while he was playing, and he knew he should begin to write his thoughts down before the inspiration abandoned him. It would become the latest of multiple songs that he had written. He knew in his soul that he was born to write and play music.

The days dragged on in a similar manner, but then the weekend finally arrived. Dorian didn't have a paid gig scheduled so he would play at the open mic night at a club across town. Lydia would be working the night shift that evening, which was secretly a relief to him. He was beginning to wish that she wouldn't even attend his gigs. He could live without all of her negative, condescending energy. After determining the time of day from a random stranger, Dorian decided to begin his trek to the club.

Upon arriving, Dorian was amazed to see the amount of vehicles in the parking lot. He had never seen the club so busy and knew that it would be a good night. Even without a guaranteed payment, an open mic gig could mean epic tips with that many patrons inside. As he entered the club, he immediately walked onto the stage when he saw that it was empty, and the bartender placed a tip jar upon the nearby old piano.

Dorian played his first three songs with the greatest of ease to the delight of his audience inside. The response was obviously favorable due to the amount of applause and the wad of bills he removed from the tip jar. Two other musicians had made their presence known, so the night went on as each would perform three songs and then concede the stage for the next one.

During the first song of his third set, Dorian was shaken from musical ecstasy as a sight in the back of the club had caught his eye. What in the world is she doing here? Wasn't she supposed to work tonight? Lydia simply sat at her empty table in the back and fixed her gaze upon Dorian as he played the second and third song in his set. He could feel the judgment and disappointment in her glare. He was eventually forced to fix his eyes on a hanging work of art in the corner opposite her so that she wouldn't be a distraction or destructive to his performance.

Once the set was over, Dorian collected his tips and walked off the stage, dreading the interaction that he knew was coming. However, as he was walking towards Lydia's hateful gaze, a young woman stepped in front of him to shake his hand and offer her appreciation for his musical talent.

"Hi Dorian. I'm Brenley Picardi. Your set was fantastic! Have you signed with anyone yet."

"I am a music producer. If you have a moment I'd love to talk."

Dorian could barely believe what he was hearing. Finally. He didn't react initially out of sheer shock and an inability to conceive the possibility that it was finally happening for him. He had to tell Lydia, but as he looked around the club for her, it seemed that she had left. After a conversation with Brenley, two other people came to the club and sat at their table. One was an executive and the other was an attorney. Dorian didn't even have to think twice. He agreed to the terms of the contract that they placed in front of him and received his sign on bonus of twenty thousand dollars. The decision was easy. Anything was better than the life that he had been living.

Once the deal was done late that night, Dorian hurried back to the backstreet that he and Lydia called home. He just had to tell her that she had always been wrong about him, and he couldn't wait to see the look on her face. Once he arrived, however, he realized that Lydia wasn't there. Dorian proceeded to ask a fellow resident of the street that often listened to him play his guitar if he had seen her.

"You know Lydia. My girlfriend. The girl that's always right there with me."

"Hey man, I have no idea what you're even talking about. From the first time I saw you on this street, you've always been alone."

As disillusioned and confused as Dorian was at that moment, in time he came to understand. As someone who had grown up the way that he did, he had never experienced a closeness with anyone, one of the most basic of human needs. It made sense that when his soul came to its breaking point, his mind had conjured an imaginary relief from the crippling loneliness that he was experiencing, even if she was nothing like the ideal partner that he would have chosen. Lydia had become a personification of his deepest insecurities, his fears of failure, and his low self esteem, courtesy of "the system."

It wasn't long before Brenley and her company had matched Dorian with the other musicians he would need to complete a band. Dates for appearances and performances were being discussed, and there was much rehearsal to be done. In time, as Dorian began to experience the success he had always craved, he had his name legally changed to the stage name that he and Brenley had come up with. The name Noah Bard would be on the lips of his future fans for years to come.

If you enjoyed this story, please consider leaving a tip. Thank you. --Vince :)

I am a novice writer, songwriter, pianist, and poet. I love all art forms and am so blown away by the talent I've encountered on this platform.